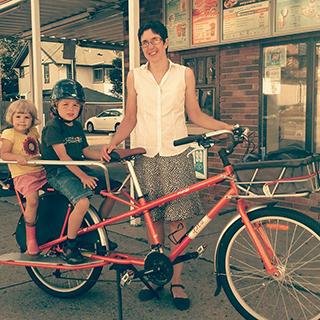 My six-year old son and I got hit by a car in downtown Saint Paul last night. We’re fine, except for a good scrape on my leg, a busted fender, and a nervous little boy. It could have been worse. Before leaving work on 10thStreet and Cedar Street I carefully studied the routes I could take from Harriet Island, where Quinn was participating in a Saint Paul Parks and Recreation day camp, to an errand we had to run off Summit Avenue on our way home to Hamline-Midway. There were no stellar options. Aside from no bike lanes, Wabasha Avenue and Kellogg Boulevard are under construction (neither of these projects include bike infrastructure). I decided to take Wabasha Bridge into downtown and then decided to take the sidewalk on Kellogg Boulevard up to College Avenue, across from the Minnesota History Center to get to Summit Avenue.

I have been bike commuting for a decade and am an extremely experienced rider. I teach bike commuting and safety as part of our employee development seminar at my place of employment. I previously served on the board of directors of the Bicycle Alliance of Minnesota and was a co-chair of the Saint Paul Bicycle Coalition. In other words, I know my business. I knew that biking on the sidewalk was more dangerous than taking a lane on Kellogg Boulevard. I have counselled countless new riders against biking on the sidewalk. Nevertheless, I felt it would be safer to bike slowly on the sidewalk given the construction, the rush hour traffic, the hill up Kellogg Boulevard, and my son on the back of my bike. I stopped at every intersection because bicycles on the sidewalk should act like pedestrians.

We came to the intersection of Kellogg Boulevard and the I35 Northbound exit ramp. I stopped and waited for the walk signal. We started across the intersection when the person driving the SUV, waiting to make a right turn, started forward. He had looked left for traffic coming down the hill eastbound, but did not look right for pedestrians on the sidewalk (or a mother on a cargo bike). He hit us. We fell. My first instinct was rage, but also awareness that he still might not know we were there. I ran over to his driver side window and let loose a torrent of obscenities. My son and the bike were still lying in the street and I calmed down (a little) when I saw that my son’s eyes were as big as saucers. I stopped and got my son onto the sidewalk. I realized that he was more scared of my reaction than what happened so I tried my best to calm down. 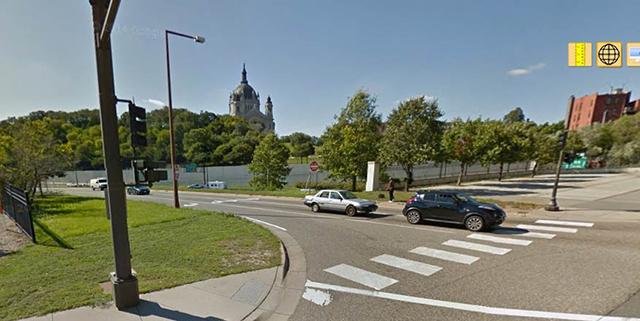 A nurse from Children’s Hospital was in the car behind the man who hit us and she helped comfort my son and made sure he was not injured. The man who hit us got out of his car, which surprised me because last time I was hit a decade ago on Saint Peter and Fourth Street my bike and I went over a car’s windshield and they did not stop. This is sadly typical from many stories I hear from friends who have been hit. The homeless people begging on the corner ran over and helped bring my bike on the sidewalk. One of them stood in front of the man’s SUV, making sure he was not going to drive off. The driver and I exchanged information. He was very concerned.

Once I knew we were okay and the bike was rideable, all the people left. I sat down on the sidewalk with my son. He was surprisingly calm and never cried. He quietly told me that he remembered to keep his legs in like I had taught him. I asked if he felt okay biking home or whether we should call his father to come and get us in the car. He said he wanted daddy. We walked down to the Liffey, called my husband, and had lemonade at the bar while we waited. 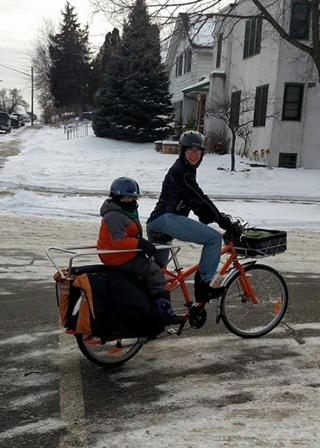 Courtesy of streets.mn
Riding in winter

Maybe I should not have been on the sidewalk. The man who hit us should have looked both ways, even if it was one-way automobile traffic. I know some people would say I should not be biking with my children, should just take our car, that I am taking unnecessary risks by riding a cargo bike in rush hour traffic downtown. Believe me, my children are my life. If Quinn would have been injured or killed, I do not know how I would continue living. He and his sister are the center of my universe. I took every precaution I thought reasonable. If there were a single bike lane in downtown Saint Paul, I would have taken it.

Others insist streets are for cars. That building bike and pedestrian infrastructure is just catering to a left-wing minority, wasting tax dollars on the fringe. It does not matter what choices I or the man who hit us made – cars are legitimate road users because most people drive cars. I drive, too. We called my husband who came to pick us up in our family’s car. I am thankful we have one.

But, that’s not the vision I want for our city. Not only is that corner of Kellogg Boulevard dangerous, it is ugly and barren. It’s not a place I want to walk or bike. I want it to be normal for mothers to pick their children up from Parks and Recreation day camps on a bike, especially when that ride is only about five miles and it is a sunny summer day. I want it to be normal for people of who do not identify as A-level, experienced cyclists to decide it is easier to bike the three miles to the grocery store or the park. I want a vibrant, busy downtown that is also welcoming and comfortable for people arriving in cars, on foot, by public transit, or by bike.

Let’s stop dithering over parking. Saint Paul’s parking study clearly shows that downtown is not at capacity parking. The bike loop and other improvements will not end the economy of downtown Saint Paul. Make it a nicer, more welcoming place where people want to be, not just drive through. Make it safer for all road users. Give a mother on a bike at least one safe choice to get through downtown so the sidewalk seems like the best choice when it is not.

The man who hit us called me last night. I did not feel like talking so I let my voice mail pick it up. He said he was very sorry about our “incident” and wanted to see if we were okay. That was nice, but I still don’t know if I feel like calling him back. 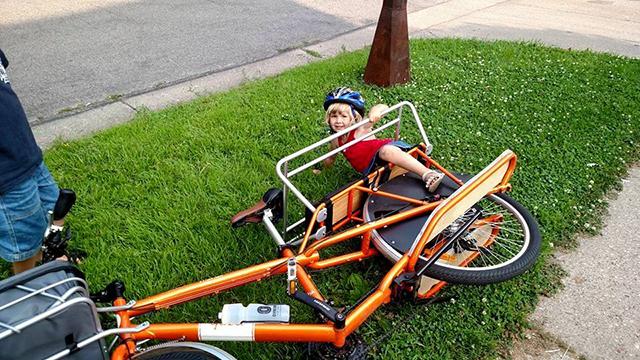 Dana DeMaster is a program evaluator and researcher for human services programs who lives and bikes in Saint Paul. When she’s not analyzing data, she can be found rabble-rousing for neighborhood bike improvements in Hamline-Midway and other parts of Saint Paul, playing Legos with Quinn (age 6) and Daphne (age 3), or sewing. She doesn’t tweet and doesn’t have a blog, but you can find some of her other writing on the Grease Rag and Wrench blog.

Hit by a car (again) in Downtown St. Paul, or why we need the bike plan