Yesterday afternoon, enroute to a meeting, I stopped to take a couple of photos: 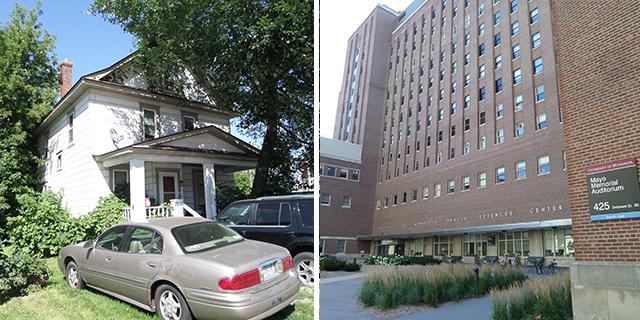 Courtesy of Dick Bernard
At left, the house where I lived with Barbara in 1965. At right, the hospital where we spent time on the 8th floor, intensive care.

Fifty years ago today I lived in a rented upstairs room in this house, just a block from KSTP-TV; and my wife, Barbara, was in the University Hospital less than two miles away, my memory says on 8th floor, in intensive care.

It had been a very long two months since we arrived in Minneapolis in late May, when Barbara was admitted for a hoped for kidney transplant, her only remaining option to live.

This particular Saturday morning, 50 years ago today, she had fallen into a coma, and at 10:50 p.m. she died. The previous day there had been a brief rally, not uncommon for those critically ill.

Among the whisps of memory was my going to the Western Union office in downtown Minneapolis after she died, sending a telegram to relatives.

Communications was not instant, then. Mine was a very succinct message.

While death is never expected, particularly in one only 22 years old, there really was little hope left: three major operations in two months, no kidney transplant.

July 25, alone, I drove west to Valley City, North Dakota, where the funeral was held on July 29.

In a family history I wrote for our son on his 18th birthday in 1982 I remembered the day of the funeral.

It was a very lonely time, I have never been able to recall many specifics of particularly the first month after her burial, but life went on for 1 1/2 year old son Tom and I.

It was very early in my life too – I was 25 – and I grew up in a hurry. It has informed my life and my attitudes ever since.

I became very aware of how important and how broad “community” is in society.

There were, out there, among family, friends and many others, people who in diverse ways helped us get through the very hard times. By quirk of fate, the funeral was one day before President Lyndon Johnson signed into federal Law the Medicare Act, societies immense gift to the elderly of this country, one of whom is now me. Here’s Grandpa Busch’s first Medicare card, dated July 1, 1966.

Today in our country we debate whether or not everyone should have a right to medical insurance; whether it is a responsibility of the individual, or of society at large.

Medicare was debated then, too.

It was not on Barbara’s or my radar screen. Debate is a luxury when survival is the only issue.

Our married life was very short, only two years, and almost 100% of the time distracted by the progression of a finally fatal illness. We never really got to know what a “normal” marriage might have looked like.

I think we would have done well together, but that is sheer speculation. The inevitable tensions of a normal marriage were something we were never able to experience.

Three weeks ago I made a visit to Barbara’s grave in Valley City. It is in St. Catherine’s Cemetery, high on a hill just east of town. 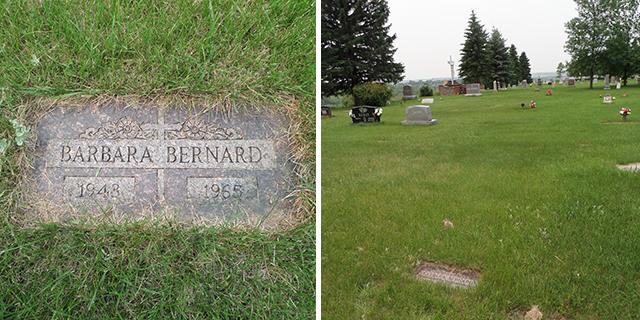 Yesterday I went briefly into the University Hospital, including up to the eighth floor, which is now used for other purposes than 50 years ago. 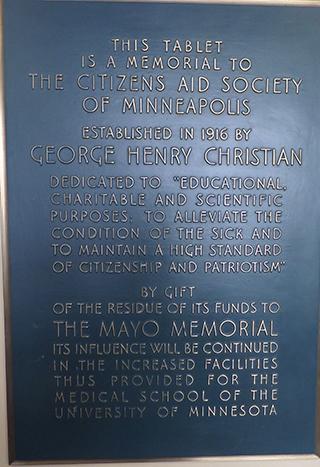 In the lobby area I lingered for a moment by a plaque recognizing the founding of University Hospital in 1916, near 100 years ago.

Elsewhere, in the medical wing of University Hospital, doubtless were patients for whom yesterday was, or today will be, the last day of their lives.

It is the single immutable fact that we all face: at some point we will exit the stage we call “life”.

Take time to enjoy the trip.

My public thanks, today, to everyone who helped Tom and I, in any way, back then in 1965, before and after, especially the public welfare system and public and private hospitals.

Remembering a death 50 years ago today