For a long time, we’ve been hearing about how Governor Mark Dayton and DFL legislators “soaked the rich” back in 2013. That’s become the conventional wisdom at both the state and national levels, from both liberals and conservatives.

For example, at the national level, Patrick Caldwell from liberal Mother Jones magazinereported that Dayton ran on a “soak-the-rich platform of massively hiking income taxes on the wealthiest people in the state.”

Locally, conservative columnists Joe Soucheray and Katherine Kersten have long been beating the “soak the rich” rhetoricial drum, as has the conservative Pioneer Press editorial board:

Finally, the Chair of the Minnesota House Tax Committee, Greg Davids, is among many conservative state legislators who have used “soak-the-rich” rhetoric to full effect.

Is the ‘soak’ rhetoric true?

But did Governor Dayton’s 2013 tax increase on individuals earning over $150,000 and couples earning over $250,000 actually “soak” them in any meaningful way. This chart, derived from the Minnesota Department of Revenue’s 2015 Tax Incidence Study, calls that conventional wisdom into question: 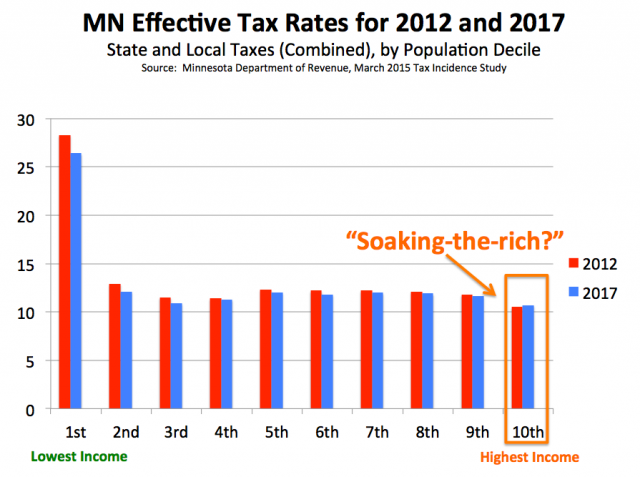 On a somewhat related issue, the chart also shows that the 10 percent of Minnesotans with the highest incomes look to be paying a much smaller share of their income in state and local taxes (10.7 percent) than the decile with the lowest incomes  (26.4 percent). However, on this point, the report contains an important caveat about the first decile data (page 17):

“…effective tax rates in the first decile are overstated by an unknown but possibly significant amount.”

But back to my original and primary point, which is not impacted by this caveat:  Despite all of the wailing and gnashing about the alleged mistreatment of the highest income Minnesotans, the impact of the Dayton-era tax increase on top earners’ overall state and local tax will be negligible.  Higher taxes on top earners didn’t cause the massive job losses that conservatives promised — Minnesota currently has the fifth lowest unemployment in the nation — and they didn’t soak anyone. This is a point that is frequently missed, or intentionally ignored, by people who focus solely on state tax burdens, without also taking local tax burdens into consideration.

So, did Mark Dayton really “soak-the-rich” when he increased taxes by $2.1 billion in 2013?   Inflated rhetoric aside, it turns out that the Dayton tax increase was more akin to a light misting than the predicted soaking.

About that ‘soaking’ of Minnesota’s rich