I’m on vacation in a part of the world where major towns (population 24,000) have weekend train service every other hour, including stops in many towns of just a few hundred.* I’m using my fair share of this convenient Norwegian transit, including buses, streetcars, and ferries. 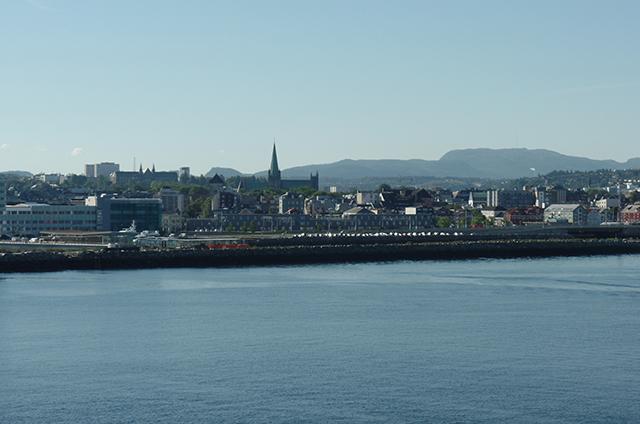 Here for a reunion, I’m seeing many friends. This week I’m in Trondheim (population 180,000, metropolitan population of 275,000). Here, an example of how to design — or not design — a bus schedule was thrust in my face by a couple of them. When I was getting the 101 on how to bus into the City, they complained,

The bus used to run every hour at 10 past the hour. They changed it, and now it goes every hour from 7-10 in the morning, and then every hour and a half during the middle of the day, and hardly at all in the evening and on weekends. Check out the schedule!

They’d saved the old schedule just to show off how impossible the new one is (my friends are both very Norwegian, which is to say opinionated and generally well-informed. They’re also a bit nerdy).

The problems they listed included: 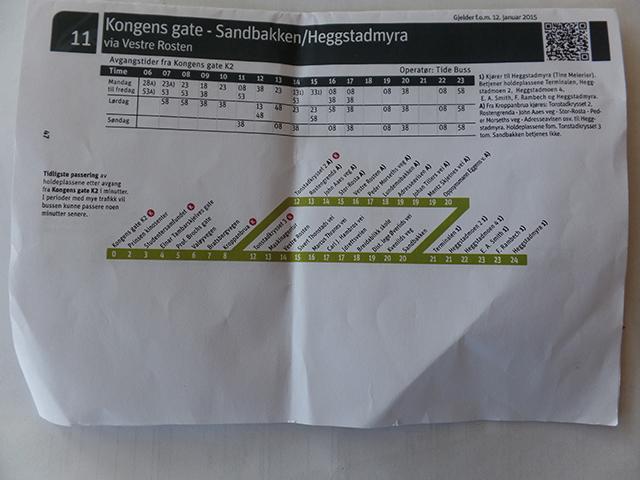 Courtesy of Janne Flisrand
A very elegant – and now outdated – bus schedule. MetroTransit, can we get these? 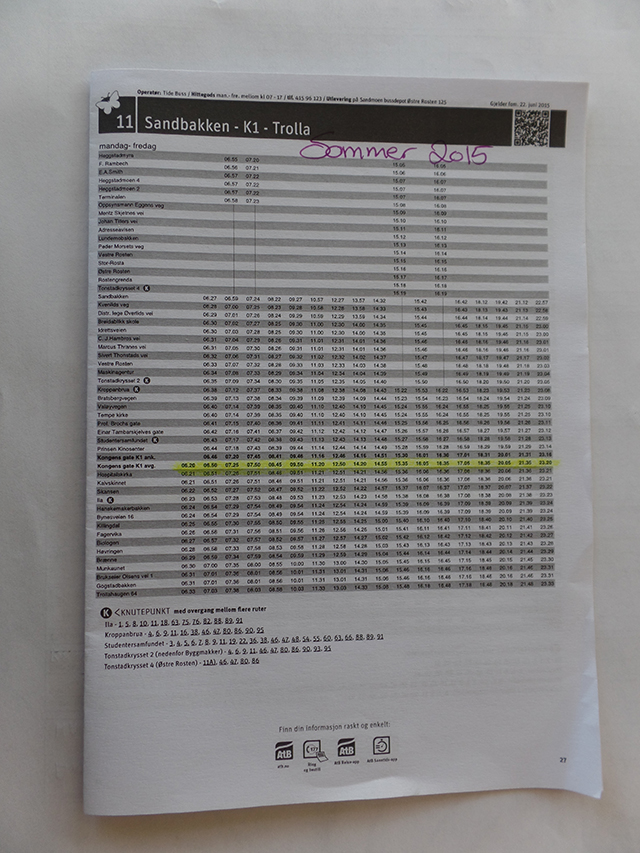 Courtesy of Janne Flisrand
This is page 1 of 7 on the current illegible schedule.

I’ve ridden this bus system twice, once five years ago and again this week. There’s always the “new rider” experience of trying to figure out how to pay, finding the right stops to get on and off, remembering how to get home where there’s more than one bus to choose between, and learning the “rules” of how to ride. I recall from five years ago, though, that it was comforting to know that I could just remember “five past to get to downtown, and 13 after on the #11 to get home.” Low-frequency busing made easy!

This new schedule is less rider-friendly. As proof, this week I’d misremembered the time to head into town and thought I had 25 minutes until I had to head out the door to catch the bus with five minutes buffer when actually the bus was two minutes away (and the next one didn’t go for 90 minutes).** Oops!

The changes were surely driven by budgets. The current times surely fit with demand, and I’m sure mid-day, evening and weekend fare short-falls are smaller thanks to fewer buses. I suspect they’ve also lost fare income from choice riders. Norway is a wealthy country and despite the incomprehensible-to-Americans taxation of cars and gas plus difficult city parking, nearly everyone who wants to own and drive a car can — and does. The annoyance of my friends suggests they are less likely to ride the bus than they used to be, and they can’t be alone. 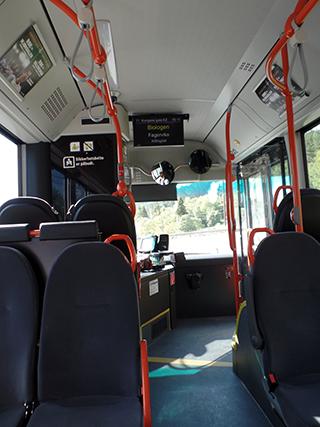 Courtesy of Janne Flisrand
This info screen showing the current and next stop was matched by an automatic announcement.

I don’t want to leave you with the sense that the transit folks in Trondheim are hopeless.

The buses ran on time and they were plentiful, clean, and comfortable (also electric). They also had these wondrous screens that showed the next stop, plus the two stops after that. There was an automatic announcement giving the current stop and next stop. For a new rider, it was as easy to know when you were coming to your stop.

Next, their smart phone payment app was really easy to use, working with American users. Notably, the one for the national train system won’t let you create an account if your zip code didn’t have the right number of digits (four).

P.S. I’m on vacation, so someone else is going to have to answer questions about Norwegian transit while I take a streetcar to go visit a stavkirke.