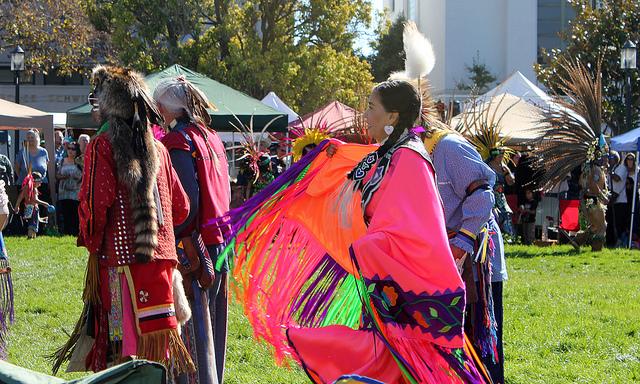 CC/Flickr/Quinn Dombrowski
A scene from the 2012 Indigenous Peoples Day celebration in Berkeley.

Yes — October 12 is Indigenous Peoples Day in the Twin Cities! Celebrating means recognizing the legacy and continuing contributions of Native Americans to this country and state. As Congressmember Keith Ellison said last year, during the Minneapolis debate:

“The very foundation of the United States, the theoretical concept of it, offered to our nation by the Iroquois Confederacy, as we were told growing up, ‘Oh, this is from the Greeks.’ We weren’t told about the Iroquois Confederacy, but we learned about it. And now that we have established Indigenous Peoples Day, every child – whether that child is Native, or whether that child is not – will learn the truth about where America really, really comes from.”

“Although debates rage on about exactly how much damage Europeans inflicted on Native populations immediately after their arrival, some estimate that up to 90 percent of the continent’s first inhabitants died from warfare, enslavement, or diseases, violence which carried into the American government’s discriminatory policies through the 19th and early 20th century, and are still felt today, when 25 percent live in poverty, versus the US average of 15 percent.”

In Minnesota, the poverty rate is even higher: 32 percent in 2014, compared to 8 percent for non-Hispanic whites. In Minnesota, Native Americans have thelowest high school graduation rate of any racial or ethnic group.

But Indigenous Peoples Day is a day to celebrate strengths. The Circle quoted Jay Badheart Bull last year, explaining, “we’re still here, we’re still vibrant, we’re still contributing to make this a better city and a better state over all.”

Berkeley was the first city to change the second-Monday-in-October observance to Indigenous Peoples Day, acting way back in 1992 on the quincentennial of the Columbus voyage. Now Berkeley has been joined by more than a dozen other cities, many in the past two weeks, showing strong momentum for change. The honor roll includes:

Want to join the celebration in the Twin Cities? You can begin the day at 7:15 a.m. with a sunrise ceremony at Thomas Beach at Bde Maka Ska. A Red Shawl Round Dance at the American Indian Center at 9 will be followed by a brunch catered by Powwow Grounds, and a panel discussion. (And if you can’t make it this morning, take time to visit Powwow Grounds some other time soon.) For a change of pace, finish the day with the Indigenous Peoples Day Hip Hop Show at Augsburg College from 5-8:30 p.m. St. Paul officially observes Indigenous Peoples Day from 11:30 a.m.-1 p.m. at Crowne Plaza (11 E. Kellogg in downtown St. Paul.)

The next challenge: changing the federal holiday.