Here’s an honest question: does our current system of roads and streets really get goods delivered to market quickly and efficiently?

If you ask any legislator pushing for more road spending or your random comment section warrior opposed to bike lanes, congestion is really hurting Twin Cities businesses. To the tune of $232 million a year (This number, used frequently during the (now disbanded) MoveMN campaign, comes from the 2012 TTI Urban Mobility Scorecard; the 2014 number has now been calculated at $327 million for 2014]

Debate the assumptions used to come up with that number all you want, but there are certainly times when congestion does indeed cause problems for getting goods delivered. I’m just not convinced the solution is to keep building more lanes on urban streets or to stop taking roadway space away from general traffic lanes or on-street parking for bikes, buses, and pedestrians.

Why do I say that? Well, for one, it should be intuitive that (mostly single occupancy) cars are the ones causing the congestion on commercial vehicles. Pay attention the next time you drive or sit for a while near any street. Cars will likely outnumber delivery trucks 10:1 or more. Don’t believe me? Here are a bunch of intersection counts by vehicle type within Minneapolis’ borders: 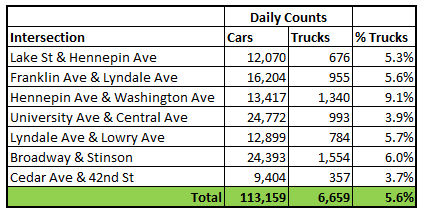 For these (fairly busy) intersections, less than 6% of the vehicles (or 1 in 16) passing through are trucks. I can’t tell for sure, but I believe “Trucks” as defined by the city includes transit buses, so adjust that number down a bit further to count only freight traffic. That’s a really small share of total. It’s not entirely inconsistent with commercial VMT share of total – where “heavy commercial” and “five-axle” as defined by MnDOT trucks make up 13% of miles traveled on trunk highways within the Metro District; it’s also not that different from national numbers discussed in this post.

A while back I compared peak-hour lane capacities on our busiest arterial streets to running an articulated bus about 70% full every 5-6 minutes in its own lane. The results didn’t favor cars – over 1,000 people per hour moved in the bus lane vs just over 600 per lane when full of cars. Of course, an empty bus lane seems like a waste of space to most people stuck in car traffic, which is why we don’t usually have the political will to implement it. To put it bluntly, that’s an ignorant position to take.

But! We know bus lanes do indeed sit empty 90-95% of the time. We know that allowing cars in mucks things up. But we also know trucks are a relatively small share of total vehicles. So here’s the proposal: let delivery and commercial freight trucks share the same dedicated lanes on streets with multiple thru-lanes in each direction. What might this look like? 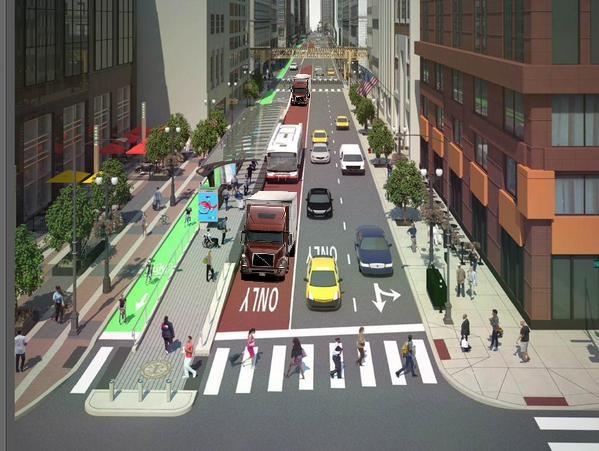 Of course, not every street will be a good candidate for this type of treatment. We would need to update the methodologies used here and here to include time savings for freight which has paid employees losing actual money sitting in congestion (for now, anyway) and valuable goods that have delivery deadlines, as opposed to people who simply prefer driving over taking the bus or biking but don’t actually lose money sitting in traffic. Yes, this might mean certain corridors become slower for cars. But transit becomes quicker (while we also build better bike infrastructure), and the many people currently choosing to drive might just shift modes.

Interstates and highways could do something similar by expanding H/OT lanes, which are much messier to implement on city streets, seems like a better route to allow individuals and businesses to decide how much their time is worth, with transit just hopping in them as it does already.

If you’re a pro-urban person concerned with the inherent subsidies big trucks receive, I’m with you. We should have policies that favor low-social cost long-haul freight (like rail) as much as possible, and let trucks handle the last-mile(ish) deliveries – the things they’re really good at. I doubt many want a return to many active rail yards in highly urban areas. At the same time, transit buses also put a hefty amount of wear and tear on our roads (about 850x that of a passenger car) and we don’t expect Metro Transit to pay a gas tax or other fees that support road maintenance, even if those fees are a small share of the local funding pie. Besides, the cost to make one lane in each direction more durable for buses and trucksisn’t that much more than what we currently spend on street construction & maintenance.

Or, we can just assume that everyone who drives a car but complains about congestion costs to businesses will magnanimously pull over to the side of the street every time they see a truck in their rear window.