Arts & Culture
Minnesota History
MinnPost’s Minnesota History articles are produced in partnership with the Minnesota Historical Society and its MNopedia project, which is made possible by the Legacy Amendment’s Arts and Cultural Heritage Fund.
Sept. 21, 2012

In late September of 1862, Confederate troops under the command of Gen. Braxton Bragg had just vanquished Union forces at the Battle of Chickamauga in Georgia. But while the nation was preoccupied with the Civil War, 1,600 U.S. soldiers were engaged in a very different war in Minnesota. On Sept. 23 – 150 years ago this weekend – Minnesota troops, led by Col. Henry Sibley, defeated Little Crow’s Dakota warriors at the Battle of Wood Lake. The battle marked the end of the bloody U.S.-Dakota War of 1862.

The origins of the war extend back to the state’s early frontier days when white settlers began pouring into the Dakotas’ ancestral homes in Southern Minnesota. In an effort to preserve at least a portion of those lands for his people, Little Crow, a leader of the Mdewakanton band of Dakota, negotiated a treaty in 1851 that ceded 24 million acres to the U.S. government in exchange for a reservation along the Minnesota River and a settlement of $21 million, allocated in the form of yearly annuities.

By the early 1860s, with the U.S. embroiled in the Civil War, the annuities from Washington, D.C., failed to arrive on time. With their historic hunting grounds depleted of game, and no money with which to buy food, the Mdewakanton faced starvation in the winter of 1862.

Little Crow looked on as the younger warriors in his band seethed with resentment at their treatment by the government’s high-handed Indian agents and their supporters in the small white settlements along the Minnesota River. The younger warriors were now calling for war against the whites in an effort to drive them out of Southern Minnesota. Little Crow urged caution, but eventually agreed to lead his warriors into battle when he concluded that war could not be avoided.

The conflict was short-lived; lasting only about six weeks during the late summer and early fall of 1862. During those bloody weeks, white settlers in New Ulm were able to beat back two Indian attacks, but the Dakota warriors achieved some early victories at Lower Agency and Birch Coulee.

As the violence increased, Sibley, as head of the Minnesota volunteers, decided to move his troops from the poorly fortified Camp Ridgely, near New Ulm, up the Minnesota River, closer to the Dakota camps.

On Sept. 19, Sibley’s troops left Fort Ridgely. Four days later, on Sept. 22, they were camped on the shores of Lone Tree, or Battle Lake as it was known then. (Wood Lake was actually located about three miles away, but its name was later attached to the battle.) That night, a large contingent of Dakota men moved down from their camp near the Chippewa River and assembled near Sibley’s encampment. In his account of the Dakota War, Kenneth Carley wrote that “Little Crow had considered launching a night attack on the troops but decided instead to ambush the soldiers the next morning, when they were strung out along the road. Dawn the following morning found the Indians hiding quietly in the tall grass waiting for the troops to break camp.”

The battle was joined, almost by accident, when some of Sibley’s men, unhappy with their meager rations, set out for the nearby Upper Agency settlement to dig for potatoes in the settlement’s gardens. As their wagons moved across the prairie, the men surprised a group of Dakota warriors who were hiding in the tall grass near Sibley’s camp.

Shots were fired, rousing the main body of Sibley’s troops. Within about two hours, the battle was over. The badly outnumbered Dakota forces had succumbed to Sibley’s superior firepower. Knowing that they had been defeated, Little Crow and his warriors fled into the countryside.

While the battle was under way, the Dakota who had refrained from the conflict assembled Little Crow’s white and mixed-race prisoners, and moved them to a safe position, later known as Camp Release, where they were rescued by Sibley forces.

Several firsthand accounts of the Battle of Wood Lake and its aftermath have survived. One of those was provided by Jerome Big Eagle, a Dakota who led his band into battle with Sibley’s troops. Big Eagle was initially sentenced to death by a military tribunal for his part in the U.S.-Dakota War, but he was granted a reprieve and later pardoned by President Abraham Lincoln. Some years later he was interviewed by a newspaper reporter, with the help of English-speaking interpreters who were fluent in the Dakota language.

“We expected to throw the whole white force into confusion by [a] sudden and unexpected attack,” Big Eagle told the reporter. “I think this was a good plan of battle. Our concealed men would not have been discovered. The grass was tall and the place by the road and the ravine were good hiding places. … The morning came and an accident spoiled our plans. For some reason Sibley did not move early, as we expected. It seemed a considerable time after sun-up when four or five wagons with a number of soldiers started out from the camp in the direction of the old Yellow Medicine Agency. They came on over the prairie, right where part of our line was. Some of the wagons were not on the road, and if they had kept straight on would have driven right over where our men were as they lay in the grass. At last they came so close that our men had to rise up and fire. This brought on the fight, or course, but not according to the way we had planned it. Little Crow saw it and felt very badly.”

Thomas Robertson provided an account of the battle’s aftermath from the point of view of a mixed-race prisoner in the Dakota camp. Robertson’s father was white and his mother was part Dakota. “The next day (after the battle) Colonel Sibley and his command came in sight, so a few of us went out and met him and reported to him the situation as it was then  and conducted him to what has ever since been called Camp Release,” Robertson later recalled. “Some detachments of cavalry were at once sent out after the hostiles, and in a few days brought in a few families that had been overtaken on the river. During the next few days, quite a number of the hostiles whose families had remained with us came into our camp, but were at once reported and put under guard with the others.”

Following the Dakotas’ rout in the fall of 1862, 38 Dakota men were executed in a mass hanging in Mankato, following a sham trial. The remaining band members were rounded up and interned over the winter of 1862 at Fort Snelling, where they awaited deportation to reservations in Nebraska and South Dakota. Many perished from starvation and illness during their time at the camp.

Now, 150 years later, commemorations of the U.S.-Dakota War are being held throughout the state. At the Minnesota History Center in St. Paul, an exhibit tracing the events of the war, including the Battle of Wood Lake, is now on display. On Franklin Avenue in Minneapolis, American Indian artists have provided a contemporary view of the events of 1862 at All My Relations Gallery (through Sept. 28). Several events and programs on aspects of the U.S.-Dakota War are scheduled this weekend; you can see a list here.

Several permanent installations provide ongoing reminders of this dark chapter in Minnesota history. These include a memorial in Fort Snelling State Park marking the site of the Dakota internment. The memorial is known in the Dakota language as “Wokiksoye K’a Woyuoniham,” which translates as “Remembering and Honoring.” A plaque at the site explains that “the memorial honors the sixteen hundred Dakota people, many of them women and children, who were imprisoned here at Fort Snelling in the aftermath of the 1862 U.S-Dakota conflict.” 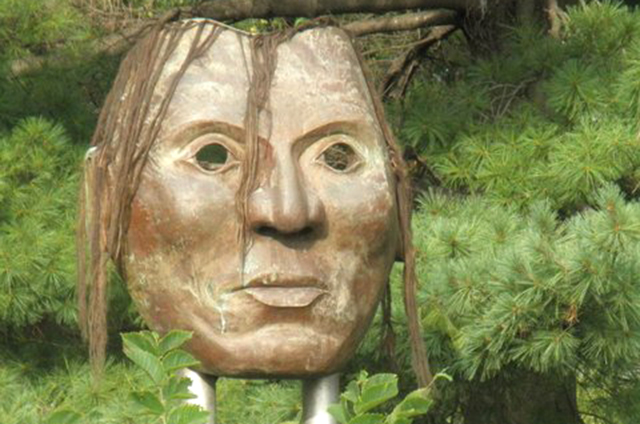 In nearby Minnehaha Park, a haunting statue of Little Crow, in the form of a death mask, overlooks the wooded ravine just beyond Minnehaha Falls.