After the last two miserable seasons of Twins baseball, fans can be forgiven for waxing nostalgic for years gone past. Today marks the 25th anniversary of the Twins’ Game Seven victory over the St. Louis Cardinals, an event that brought the Twin Cities their first major sports championship and turned the cities into a one big, crazy, happy family.

At the start of the 1987 season, the Minnesota Twins were virtually no one’s idea of a World Series champion. A team of relatively young players, they’d lost 91 games just the year before, narrowly missing last place by four games. 1987 would prove to be a roller-coaster ride, with the team winning 85 games and taking their division by just two over Kansas City. On the road, the Twins were miserable, going 29-52, the worst in their division. Back in the old Hubert H. Humphrey Metrodome, they were a nearly unstoppable force, with a 56-25 record, the best in all of baseball. Those records would augur the fate of the Twins in the World Series.

I wasn’t living in the Twin Cities in 1987, but I’ve been here through the worst of Twins baseball (late 1990s) through this last glorious decade, watching the club rise to great heights without ever reaching the pinnacle. I’ve watched Joe Mauer and Justin Morneau become the cream of the Major Leagues, watched good ballplayers like Torii Hunter and Johann Santana shine and then shine elsewhere. But I have to wonder whether the current crop will ever grab the state’s attention quite like those 1987 Twins. Fans have the names tattooed on their collective hearts’: Kirby, Herbie, Bert, Sweet Music, TK, Danny, the Rat, Senior Smoke. Everyone who waved a Homer Hanky also embraced the lesser-known names, the Les Strakers and Al Newmans modest players who we hold close because their failures so often mirror our own.

When the Series began, the baseball world didn’t know what to think of the Twins. Here was a team that just pummeled the favored Detroit Tigers in the AL playoffs, but had a million things going against them: awful road record, the only team to win a pennant having been outscored in the regular season, questionable pitching at best, they should’ve been outmatched, outgunned, outpitched — the Twins, in ABC broadcaster Al Michaels’ words before the first game, were “out- everything.” The Cardinals, with the National Leagues’ best record, were sure to bring the Twins back to earth. Even Whitey Herzog, the Cards manager, said it was “a shame” that the Tigers weren’t in the Series. No one, it seemed, felt the Twins deserved to be on the big stage. Courtesy of the Minnesota Twins
Kirby Puckett at bat

The Twins had a pair of excellent pitchers in Frank Viola (17-10, 2.90 ERA, 197K) and Bert Blyleven (15-12, 4.01 ERA, 196K), but the quality dropped off sharply after that, with rookie Les Straker coming in as a less-than-reliable number three. Offensively, the Twins were up there with the best, with three batters hitting over thirty home runs: Tom Brunansky (32), Kent Hrbeck (34), and Gary Gaetti (31). The team’s star, Kirby Puckett, narrowly missed the 30-home-run club with 28, but led the team with a .332 batting average and 96 runs scored, and was a Gold Glove centerfielder.

Thanks to baseball’s past habit of alternating World Series home field advantage on an every-other-year basis, the Twins would have four games in the Dome in 1987, in a 2-3-2 format, the first and last games here in Minnesota.

The Twins pounced early. The team didn’t just win its first two games in the Dome, they crushed the Cardinals by scores of 10-1 and 8-4. Aside from the great pitching and contributions from nearly every player up and down the lineup, if you go back and read the old newspapers, as I did, you’ll find the extra advantage that the Twins had: a wonderfully manic fan base that went berserk for their team. All over the cities, people waved signs, wore hand-lettered shirts proclaiming love for this Twin or that, and a Minneapolis cop even tied a dead Cardinal to the brim of his uniform hat. With every game, the Star Tribune printed a “Loudest Play” graphic, with the decibel level at exciting moments. The Cardinals could barely cope, the Dome flummoxed them, and suddenly the championship seemed within the Twins’ grasp.

It was perhaps fitting that the Twins won their first games at home and then were essentially shut down in St. Louis. They lost 3-1, 7-2 (with Frank Viola going just over 3 innings), and then 4-2. The local sportswriters were worried, filling pages and pages of the Strib with their hand-wringing. But the 1987 Twins were perhaps one of the most laid-back and humorous teams you could find: Nothing would ruffle them, and the series wasn’t over, as Yogi said, until it was over. In Game Six, Kent Hrbek’s 6th inning grand slam pushed a one-run lead to five, and when it was over the Twins won 11-5.

Game Seven was close but not so close: Viola went eight innings, the Cardinals looked stymied, and the Twins had a 4-2 victory, and their first World Series Championship. 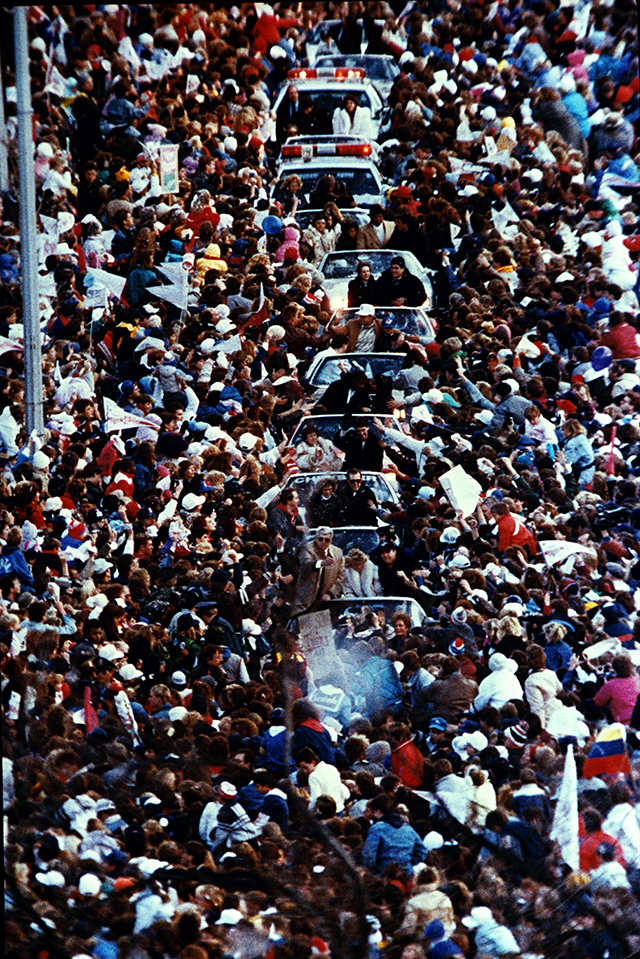 Courtesy of the Minnesota TwinsFans weren’t shy about showing their support during the World Series victory parade.

Again, if you can’t remember, look at the papers: The cities went crazy. I mean insane. Gov. Rudy  Perpich declared a half-day holiday for government workers, St. Paul schools did the same, and in Minneapolis any child could get out of class with a parent’s permission. There were two parades, one in Minneapolis, one in St. Paul, hundreds of thousands of people crushing around the Twins motorcade, delirious. People literally pulled off the 1-94 exit ramp and drove their car up onto the berms, up and down the highway, parking anywhere and everywhere.

Looking back, you begin to realize how special that first championship was to Minnesotans. The 1991 World Series is considered one of the best — if not the best — in all of baseball history. But the 1987 team, like a first love, will always be remembered with a special fondness, its ragtag, screaming glory something for the ages.

In ’87 the Twins turned the towns upside down