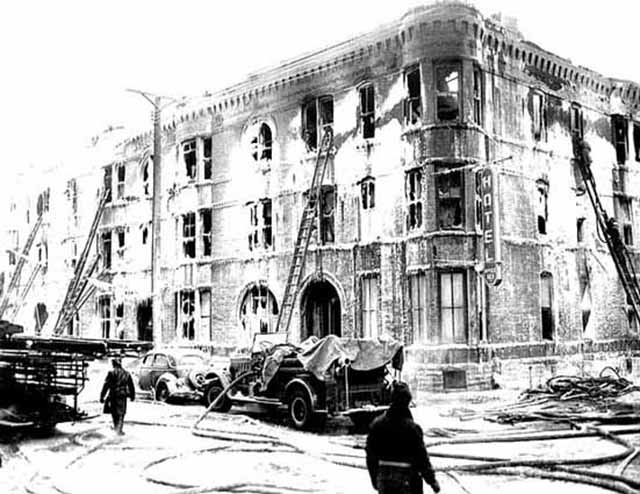 On a frigid winter morning in 1940, just before dawn, an explosion rocked a quiet block at the southern edge of Minneapolis’ downtown. Within minutes, the Marlborough Apartment Hotel at Third Avenue South and Fifteenth Street was engulfed in flames. The deadliest fire in the city’s history, which occurred 73 years ago today, would claim 19 lives and destroy a modest three-story building that housed more than 120 residents.

The hotel’s janitor, Otto Knaack, provided an eyewitness account of the conflagration. At about 5:45 a.m., Knaack was in the basement hallway just outside the boiler room when the explosion occurred.

“When I opened the door, something tossed me back into the areaway in the basement,” he reported. “All the windows in the boiler room were blown out. I got up and went to get my wife and my baby out of our apartment. Then, I went up to the first floor to get my daughter and her roommate out of their rooms. By the time I roused them, the first floor was burning so fiercely we couldn’t get out. We had to jump to the ground 6 feet below. The whole place seemed to go up in flames suddenly.”

Just two days before, Minneapolis Fire Chief Earl Tagert had reported that the city’s fire losses during 1939 were the lowest in more than a quarter of a century. Courtesy of the Minnesota Historical Society/Star Tribune
Minneapolis Firefighters trying to move an iced-in Hennepin County Morgue truck during the fire at the Marlborough Hotel.

On Jan. 3, the near-zero temperatures impeded rescue efforts by the city’s fire department and left the hotel’s charred remains an icy ruin. Several of the unfortunate residents had leapt to their death from third-floor windows while others were trapped in their rooms before they had a chance to flee.

Fire trucks raced to the scene within minutes after the alarm sounded just before 6 a.m. But the building was already a mass of flames by the time the first rigs reached the hotel. Observers reported hearing the trapped residents screaming for help and watching as they frantically smashed windows with fists, chairs and shoes in an effort to escape. Firemen struggled with frightened victims as they tried to carry them to safety away from the flames. One fireman was bringing a hysterical woman down the fire ladder when she struggled to get free. Both she and her rescuer fell two floors to the sidewalk and were seriously injured.

As the flames poured out of his third-floor apartment, one frantic man could not wait for the ladders to reach him and his wife. He pushed her out of the window and she fell to her death. He leapt out of the window after her, but he survived.

As firemen rushed to the aid of the trapped hotel residents, one passerby,  a 29-year-old cab driver named Henry Kadlac, joined in the rescue effort. Described as a real hero by several observers, Kadlac caught many of  the children who jumped out of the burning building or were tossed out by their parents.

The victims,  identified by grieving relatives at the city morgue, included Gerhard and Helen Franke and their two children, Otto and Renee;  George Jackley, the head waiter at Shiek’s Café and his wife of four months, Tinka Jackley; and Clayton Weisel,  the director of the Minneapolis Symphonic Orchestra, and his brother, Al Weisel.

‘Everything was black and charred’

Later,  after the fire had been extinguished, the Minneapolis Tribune’s William Smollett described the smoldering ruins. “Room to room, floor to floor, there was nothing that escaped the flames. Everything was black and charred, and smoke was rising from the center of the building,” Smollett reported.

“There was evidence everywhere that human beings once had lived in these blackened rooms. But you couldn’t help but wonder how it was possible that anyone escaped. Your mind couldn’t conceive how safety was possible once the flames roared through the walls,” he noted. The survivors, many of whom suffered severe burns and fractures, were rushed to Minneapolis General Hospital. There, the hospital’s medical team had pioneered the use of a new drug,  sulfanilamide, an antibacterial ointment applied on burns and bone fractures to prevent the spread of infection. Several of the survivors, who were injured when they jumped out of the burning building, were treated with sulfanilamide, which was considered a “wonder drug” of its time. Dr. Wesley Burnham, then  a General Hospital intern, remembers applying the new drug on Marlborough fire victims with severe second degree burns. “It was sulfanilamide and it was red,  “Burnham later recalled. “We smeared the burn areas with this red ointment. And soon everything was bright red. The sheets, the floors, our uniform and anything else the ointment touched.”

Fire investigators were not able to determine with certainty the cause of the blaze, but they speculated that it might have been sparked by smoldering cigarette butts wrapped in garbage   thrown down the trash chute.

The Marlborough Apartment Hotel, a 45-year-old brick and frame building, had been inspected four years earlier but no violations of the city’s fire code had been noted at that time, according to the Minneapolis Star Journal.

“The building was heated by a steam plant fed by coal, and this was found to be in good working order in the 1936 check,” the paper reported. “No ashes were found in the basement and no loose or exposed electric wires were observed. The boiler room was in clean condition.”

Later investigations confirmed there were no building deficiencies that could have caused the blaze, and that the building’s owner, Henry Janise, who lived at the hotel, was in no way responsible for the disaster. Still, the city’s building inspector,  John Nelson, used the tragic incident to call for stepped-up action against local landlords whose properties were in violation of the city’s building codes. Nelson pointed to four large homes that had been cut up into small apartments illegally. Declaring the owners “flagrant violators of the building code and state housing law,” Nelson said he had asked the city attorney to begin legal action against the owners.

In commenting on the Marlborough tragedy, the Star Journal’s editor said, “the apartment hotel fire costing a score of lives on Wednesday will inevitably bring a tightening of inspections and precautions. In this case, there is apparently no basis for expose or crusade, no reason to believe that what happened was due to anybody’s negligence or misfeasance. Yet whatever redoubling of safeguards comes as a result will be all to the good.”

The 1940 Marlborough Hotel fire: ‘There was nothing that escaped the flames’