Sit back and let me tell you a story about a game-changing open source e-commerce project, an emerging web development firm in Bloomington, and how folks there discovered this project and I, in turn, discovered them.

(Open source is a model that provides access to a product’s underlying technology and any specialized knowledge it took to create it. In the case of open source software, the underlying computer code –called “source code” — is made available under some form of copyright license that adheres to the Open Source Definition.)

What I learned is illustrative of how Internet and web connections are changing everything from value discovery to customer satisfaction — and to how awareness of an emerging company can happen if they’re in-the-game and leveraging new social media tools.

Last year, I was performing some due diligence for a client on e-commerce software. Stunned by how poorly executed most open source e-commerce projects were, I was delighted when happenstance brought me to this blog with a link to an open source e-commerce package called MagentoCommerce. After 30 minutes on the site, scanning posts in the forum and looking at the demos, I realized that the sheer scope of the energy, effort and enthusiasm the community was exhibiting around this open source project was going to raise the bar quite high for any other e-commerce offering … whether commercial or open source.

A local Bloomington firm, August Ash Inc., also found MagentoCommerce in much the same way I had, though they came upon it in early 2007. Turns out they are the only known Minnesota firm to have already launched sites on this new open source package (which shipped the very first version on March 31, 2008) and you also might be surprised to learn why they took the risk on such unproven software, how doing so actually aligns with their focus on quality and customer satisfaction, and how I came to learn about August Ash in the first place through the use of social media.

Over nine years ago and right out of college, Erich Hanson started what would become known as August Ash. A programmer as a teenager, Hanson went on to be educated in physics and astrophysics and began doing web development in 1999 for friends and family, primarily as a hobby.

His primary focus at the time was using his science and technology understanding to perform user interface design for touch screens on medical devices, which turned out to be informative for its current work in web development. These early efforts also informed one key value of the firm Hanson has built: a hyperfocus on outcomes and results from every web-based creation they deliver for clients. 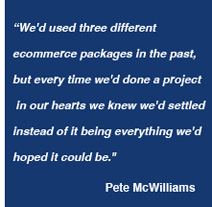 Evolving from that base, moving in to Internet marketing and web design, August Ash has grown in to a 15-person firm (expanding soon, since they’re on the hunt for developers as business accelerates).

Immediately upon seeing that I thought, “Who in Minnesota is using MagentoCommerce?” and went to that Twitter account and saw this, “August Ash Inc. is a Minneapolis web design firm specializing in Internet marketing and custom web development solutions.“

I sent a blind “info@” email to the firm (there are no names on the contact page) and got a nice response back from founder Erich Hanson. He and I grabbed lunch last week and had a subsequent phone interview Friday with him and his head of development, Pete McWilliams. I just had to know how and why a small firm hyperfocused on customer satisfaction, quality and high value would take a flyer on a 1.0 version of an open source e-commerce package.

Though I was quite impressed by the vision, values and mission Hanson and team exude and have clearly translated in to quality work for their client base now numbering 250-plus, I was primarily curious about their decision-making process on following, learning and subsequently launching sites on what would be a 1.0 version of MagentoCommerce.

Their recent couple of years of development activities had been done using the Zend Framework, an open source, object-oriented web application development framework, one whose open-source community goal is toward simplifying web development while promoting best practices in the PHP developer community.

Starting on version .2 of the Zend Framework, August Ash had worked toward taking best practices developed for clients and saving them as reusable code bases (and striving to build their own code library), in an attempt to accelerate their web development speed, save costs for their clients and themselves, and be able to create ever-more robust sites achieving results.

“We’d used three different e-commerce packages in the past, but every time we’d done a project, in our hearts we knew we’d settled, instead of it being everything we’d hoped it could be,” McWilliams stated. Hanson chimed in and explained that whenever any client wanted to add a custom feature, it was a daunting task to ensure it would scale strategically, be flexible now and in the future, and be something they could support for their clients. McWilliams went on, “As we kept tabs on MagentoCommerce’s progress and watched the ecosystem around it grow, we grew more and more excited.” They started experimenting with the beta software and “it did almost everything out of the box,” Hanson made clear to me.

According to Hanson and McWilliams, using pre-release beta software and launching on a version 1.0 product was actually less risk than other approaches they’d done in the past:

• Varien, the company that started and is driving MagentoCommerce, put a ton of work into the user interface. The backend, administration interfaces that clients use with other software packages are horrendous and not terribly usable.

• Though the learning curve for developers is steep, once in place, both the frontend and backend are so easy to use that training and support is significantly less than any other project they’ve done to date.

• Clients have a much easier time of managing and self-supporting their use of a MagentoCommerce deployment.

While both said that it’s clearly a 1.0 release and there is much work to do and features to add, what they have done “is so well done it’s less risk and we’re creating our own code to extended the software and will be contributing back into the community to make MagentoCommerce even better,” Hanson proudly said.

Besides meeting some new folks, learning about a firm that I will undoubtedly refer clients to, and deepening my understanding of the pros and cons of MagentoCommerce, I’m delighted with the connectedness and access social media tools provide. The adoption and use of new open source e-commerce software, discovery of it through blogs and awareness happening with microblogging (i.e., Twitter) are yet more evidence that Minnesota innovation in Internet and web technology is growing everywhere.