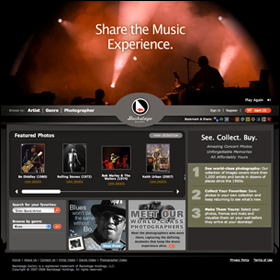 Imagine having access to hundreds of thousands of high-quality photographs of your favorite musical artists. Glimpses of concerts past. Peeks backstage and views of these musicians as they prepare for, or wind down from, their time on stage. Backstage Gallery is a Minnesota-born company that launched last month and is delivering exactly that online.

The idea for it emerged from the mind of the now-retired Best Buy president of U.S. retail stores, Mike Keskey, as he searched for high-quality photographs of his favorite musicians for his new media room in a second home located in the Brainerd Lakes area.

Going online and searching, he found numerous outlets at the low end selling cheap, cheesy posters alongside a handful of high-end galleries that charged in the thousands of dollars for prints of photographs from renowned, published photographers.

After an exhausting search for photos suitable for framing that weren’t pedestrian or a cliche, Keskey thought, “There has to be a better way, and there’s a business here!”

Keskey then connected with his contacts in the entertainment industry where he learned that every concert venue for decades invited in freelance photographers who hoped to snag some candid shots they could sell to local publications or news outlets. As he did his due diligence, Keskey discovered that these freelancers had taken thousands of shots and, fortunately for this idea, they owned the copyrights on all of their photographs. He then set forth to meet several of these photographers and learned that most of them had boxes of these phenomenal photos stored away. Most were gathering dust since these folks simply didn’t have a method for marketing, distributing, being paid for and fulfilling any sort of demand that might exist for these delightful music memories.

As his concept formed, Keskey nailed down all the legal issues, built a digitizing lab in Chaska for high-quality and volume image-scanning, and honed the value proposition for the consumer, the freelancer and the soon-to-be-launched Backstage Gallery.

With film in various states of storage (some of it stored on a closet shelf or in basements), it was pretty compelling to a photographer that this key work could be archived digitally for free while Backstage Gallery would market, sell and pay them a royalty for all photos sold. Keskey invested about 18 months in stealth mode to build a critical mass of photographers (50 of them have been signed to date) with 500,000 photos digitized so far and another 500,000 in the queue. With photos from the 1950s up to today, there are 2,000 artists and bands represented in these photo collections and — while most of them are in the rock genre — blues, reggae, country, R&B and jazz are quickly being added.

Because of the volume of archive images that are a couple of decades or more old, Backstage Gallery’s primary demographic is the baby boomer crowd. While a group of people that’s 76 million strong is nothing to sneeze at and presents a major market opportunity, I do wonder at the future growth of the category unless there are ways to embrace current artists and venues while engaging those of us involved in social networking or media of any kind. 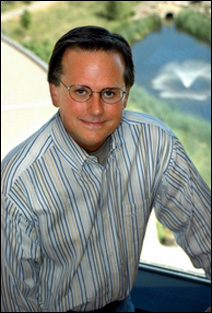 The man I interviewed for this story, Kim Garretson, is on the board and a key player. Garretson addressed my concerns by outlining how they plan to accelerate Backstage Gallery’s adoption in the marketplace.

Go-to-market plan Their go-to-market plan is varied and goes far beyond simply selling one-offs of photos on the website. They’ve already become a wholesaler of images to the home decor industry (via partner Bellacor, which is one of Minnesota’s top five home decorative accessories businesses and is merchandising about 6,000 of Backstage Gallery’s best images). They’re opening up other channels (e.g., custom home theater businesses) as well as commercial outlets such as restaurants, bars and hotels through distribution firms that specialize in this area. In addition, they’re also looking at the mass retail channel since music CDs are downtrending dramatically and augmenting the music category with framed photographs. As Backstage Gallery moves forward, they’re most excited about the digital side. They’re courting big media companies since all of them are striving to offer far more compelling online experiences in order to attract readers and viewers to spend their precious time with them, instead of their competitors or new media offerings.

Garretson also offered up other thoughts on how they are considering extending their revenue opportunities with Backstage Gallery photos. One of the most interesting was what they’ve already begun executing: The company has an initiative under way interviewing photographers on-camera and they’ll soon be delivering “mini-documentaries” as these photogs recount stories from their experiences being at these concerts, hanging out backstage hobnobbing with the musicians, photographing these artists and their entourages in never-before-seen images and bringing forth their memories from those days giving us a peek into these moments in history.

The company is currently “pre-revenue” and expects profitability to be achieved in the near-term with a possible exit strategy being acquisition.

Local Minnesota photographer Gary Smaby is a locally known analyst, venture capitalist, artist and guy that I’m one degree separated from but have never met (though fellow Minnov8 member, Graeme Thickins, has this post from November of 2006 worth a read). As I examined the Backstage Gallery site, Garretson let me know that there were “a couple” of Minnesota photographers represented, and I immediately clicked on Smaby’s gallery.

In the video below, I captured a 33-second opening from the Backstage Gallery home page and with permission of Kim Garretson, I added a select few images from Smaby’s portfolio (and about 1:30) to the video so you can get a feel for some of the photos on the site.

There is much more in this interview (including their technology, scanning systems and more) and you’re encouraged to listen to the podcast (click the “>” play button) or download it to your iPod or music player for offline listening.

Check out Backstage Gallery and explore on your own. You’ll be delighted…of that I’m certain.