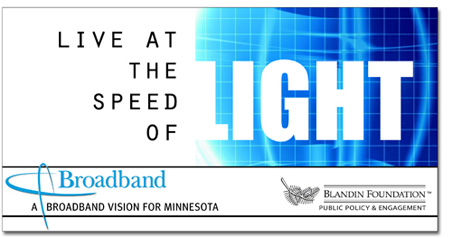 Anyone who understands that the Internet is a platform, social media are fundamentally shifting the way we connect and communicate with one another, and that application and computing functionality is rapidly shifting to the cloud, will instantly appreciate the efforts of a broadband public policy initiative by the nonprofit Blandin Foundation in Grand Rapids, Minn.: Blandin on Broadband.

When I wrote a post comparing what happened to a small Minnesota town bypassed by the railroad in the 1880s to the effect of being bypassed by ultra-high-speed broadband today, (see “The Railroad and Minnesota Broadband“), several people emailed me citing the following passage as the key reason why initiatives like Blandin’s Broadband one are so imperative for Minnesota, and specifically those towns and rural areas that lie outside the metro:

If you buy in to the premise that we’re living in a time of the greatest shift in communication and connection in history driven by the Internet — and that the transport of digital bits is as important (if not more so) than the movement of physical goods over the past 100 years or so — it almost goes without saying that location is not only less important today, in many ways it’s irrelevant unless you don’t have access to the Internet and fast access at that.

In 2003, Blandin crafted a vision (PDF) for Minnesota ultra-high-speed broadband “…designed to catalyze broadband investment and use, raise awareness about the value of broadband and encourage public and private investment in rural broadband capacity. Expanding the use of broadband technology increases the potential to retain jobs in rural areas, grows new markets for business, strengthens health care, enhances educational access and improves the quality of life.” I had a chance to interview Bill Coleman of Community Technology Advisors Corp. about what they’ve achieved and what’s next.

Coleman is a man whose background in community economic development with the state of Minnesota — planning and promoting the successful Star Cities program, for example — along with his subsequent employment by the telecom firm Onvoy, gives him the skills and understanding to take Blandin’s initiative to outstate Minnesota communities. He engages, evangelizes and applies the resources of the Blandin Foundation (e.g., community “Get Broadband” program) to ensure Blandin acts as that catalyst helping communities vault themselves forward toward a world-class broadband footprint.

Speaking to me on behalf of the Blandin team led by Bernadine Joselyn, Blandin’s director of public policy and engagement, with Ann Treacy and Becky LaPlant, Coleman discussed several relevant tangents surrounding the current state of Minnesota broadband deployment. He clearly detailed how this initiative was started, the motivators, the progress to date, and their perception of new involvement in broadband by the state of Minnesota.

ULTRA-HIGH-SPEED BROADBAND: WHY BOTHER? In today’s time of accelerating Internet, web, social media, video, and cloud computing application delivery, there’s absolutely no question that connection speed is of the essence as detailed in this table from Blandin’s “Broadband Vision for Minnesota” report (PDF): 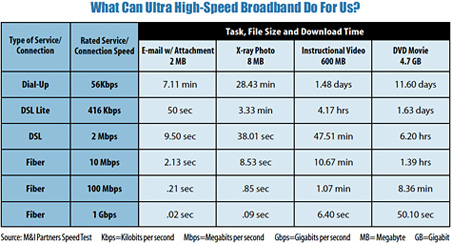 Is Minnesota competitive? Compared with the rest of the country, Minnesota is slightly above average in broadband connectivity. But it’s no longer about comparing ourselves with Wisconsin or Iowa. Our competitors are worldwide, and in this context, the picture isn’t pretty. In 2004, the United States, which led the world 20 years ago in telecommunications infrastructure, slipped from 13th to 16th place worldwide. While our lead is slipping, such countries as Korea and Japan are deploying advanced, robust ultra-high-speed broadband networks.

The broadband networks that crisscross the globe can export jobs as easily as they can information. Many of the countries with which we compete have lower labor costs, natural resource costs and environmental and regulatory costs. We cannot succeed only by working harder — we have to work smarter. And that means embracing ultra-high-speed broadband as critical 21st century infrastructure.

Since its inception, the Blandin Broadband Initiative has

But is Blandin’s effort enough?

BROADBAND: FOR-PROFIT SERVICE OR PUBLIC UTILITY? No question that deploying ultra-high-speed broadband across Minnesota’s extensive geography requires commitment and investment. With the distance, along with sparse populations in some areas — and reluctance by telecommunications providers to make that investment because of lengthy return times — many strategies have been tried.

More and more communities are examining a fundamental question: Is ultra-high-speed broadband a private service, one installed and delivered by for-profit companies (publicly regulated or not), or a public utility akin to water or roads?

This is still an open question. The Telecommunications Act of 1996, which forced local telephone companies to share their lines with competitors at regulated rates, wasn’t terribly effective. New, proposed overhauls of the telecommunications industry (e.g., Telecommunications bill of 2005; COPE 2006) mean that the questions surrounding who implements and delivers ultra-high-speed broadband, the public or private sector, as well as who regulates the industry (the states or the federal government), is still in flux.

Regardless of how well meaning, smart or accomplished an organization like Blandin and its associates are, it’s highly unlikely that the status-quo telecom companies, forces against change, and inability for any organization to singlehandedly shift public perception and accelerate funding for infrastructure, means that engaging government in this effort is critical.

MINNESOTA ULTRA-HIGH-SPEED BROADBAND TASK FORCE In the last Minnesota legislative session, both the House and Senate passed legislation (HF2107/SF1918) to “…create a High-Speed Broadband Task Force to develop a broadband deployment goal for the state and a strategy to achieve it.”

“…the bill is something that will bring Minnesota into the 21st century by asking the governor to appoint the task force to make legislative recommendations regarding the creation of state high speed broadband goal and a plan to implement that goal.”

The governor would appoint 19 members to the task force, in addition to four appointed by the Legislature. A report and recommendations will be due from the task force by Nov. 1, 2009, that

I asked Coleman specifically about this task force and what it meant for Blandin’s Broadband initiative and if it was neutral, positive or negative. “We see the task force as a very positive development and have A LOT of confidence in the chair, Rick King. With regard to Governor Pawlenty, he has been a true supporter of our efforts all along, even ‘attending’ a Blandin conference via webcam from his hotel on his recent trip to Hong Kong, so he could speak directly to those attending and articulate his full support for Blandin’s broadband vision.“

Coleman went on to describe the positives of having both the legislative and executive branches of state government involved in this fundamentally important systemic issue key to the future of Minnesota, primarily because of their ability to mandate public policy and make law. He also mentioned that Blandin’s strategy board is having a retreat in September where its future direction, involvement with the task force and other topics will be discussed and debated.

The only hesitation, or hint of negativity, surrounding this task force that I sensed from Coleman was this aside: “The only thing about the task force I’m reticent about is waiting for one and a half years for the state task force to deliver their report. In ‘Internet time,’ that’s an eternity.“

As an (almost but for three years) lifelong resident of Minnesota, I’m delighted that such an organization as Blandin, an experienced and accomplished guy like Coleman and our elected officials and appointed task force members are analyzing and strategizing over exactly how our state will be vaulted into the Internet age in a competitive and world-class fashion with ultra-high-speed broadband. Without it, we’re certain to observe our competitive advantage slowly erode, our jobs continue to move offshore, and the technical abilities of our labor force never fully materialize, as other states and countries with foresight invest in their Internet future.

(Editor’s note: Full disclosure: MinnPost recently was awarded a three-year Blandin Foundation grant totaling $225,000 for use in substantially increasing our reporting and commentary on rural issues and communities, and in connecting MinnPost with more readers in Greater Minnesota. MinnPost had no role in choosing the topic or the approach of this article, which is one of the weekly posts reprinted from the Minnov8 website.)