Today’s accelerating adoption of open source software (OSS), and the shift from desktop to web applications increasingly built on top of OSS, is being embraced by individuals, the nonprofit sector, and small, midsize, and even enterprise businesses.

As more of us get connected via the Internet and through web applications, seek ways to make our collaboration more powerful and shift our old serial and linear processes to ones that are parallel and associative, OSS is a key building block of Internet and web technologies and applications. OSS is also gaining momentum globally and affecting all industries and institutions, even educational ones.

That said, educational institutions often lag the private sector in adopting new technologies until proven, especially the kindergarten through senior high school levels. K-12 is often seen as risk-averse and needing clarity about the efficacy and pedagogy of using any particular technology. It must be proven, and the benefits to learning and student achievement crystal clear before any technology is implemented, especially OSS.

On the flip side, higher education is a hotbed of OSS use, and many projects have origins in colleges and universities. One could argue that our public institutions taking risks, researching new possibilities, and pushing against the membrane of the future is at least as important as their educational mission and has contributed code and thought leadership in OSS.

Though I’ve been aware of the OSS learning management system called “Moodle” (Modular Object-Oriented Dynamic Learning Environment) for some time, I was both delighted at what I discovered at the University of Minnesota and surprised (stunned might be the better word) by its adoption within Eden Prairie schools, where my son attends high school.

There are lessons in this story for all of us about how two very different educational organizations recognized that collaboration, human connection, and the move to parallel and associative learning is at the core of education going forward, and took calculated risk with the OSS Moodle to meet new needs.

Moodle at the U of M
While performing some research for one of my clients on learning management systems (LMS), I stumbled across a Powerpoint deck titled, “Moodle Implementation at the University of Minnesota” (PPT) by Elena Ivanova, I.T. professional focused on Moodle, and Scott Barnard, emerging technology lead in the Digital Media Center.

In the slide deck, they discussed why they adopted Moodle. One that came as a surprise — and confirms what Minnov8 readers understand about the new collaboration paradigm exploding as the web matures — is that University faculty embraced the Moodle social constructivist philosophy which has, at its core, collaborative learning.

To me, this is a fundamental recognition of the shift occurring with the Internet and web. Books like Wikinomics to Wisdom of the Crowds or Here Comes Everybody discuss mass collaboration, an emerging parallel and associative way of learning and collaborating, instead of what we’ve always done (i.e., linear, serial learning and collaborating). With more and more opportunities to connect with one another online — and a participation culture of always-on and always-connected continues to accelerate — driving learning models forward that map to what’s happening online is key to the University’s future.

I reached out to Ivanova and Dave Sandum, Eden Prairie Schools’ director of operational technology, to discuss the reasons behind the adoption of Moodle (Sandum could not be reached after repeated attempts, and his comments are from this Eden Prairie News article).

On this point about collaboration and the fundamental shift occurring, Ivanova said this, “That would be a question for someone with a PhD in education, but I personally think that (Moodle) does not impose any major obstacles. It still supports and encourages linear structure of a regular academic course.”

You have a site that is broken into the weeks/topics, and every week you add materials to read (PDF, words, lecture notes), and activities to participate in (such as an assignment, quiz or forum). Once you feel comfortable, you may use more collaborative features, such as allowing students to rate one another in the forum, add and comment on glossary entries, and more.” 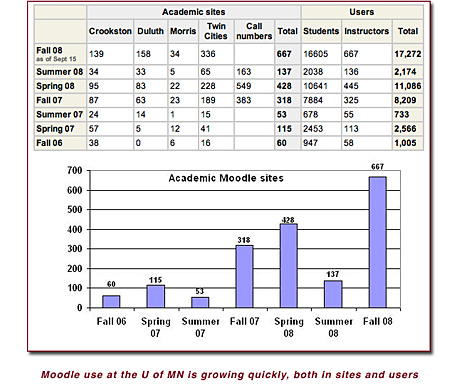 Ivanova also emphasized that Moodle is also easy to use and intuitive, has a rich set of tools, lots of third-party add-ons and good design, and the University team behind Moodle could point to a highly successful implementation of it at U of M-Crookston.

Ivanova made it clear that this major adoption at the U of M didn’t come easily. They still have an active license with WebCT, and it’s used throughout the University. In fact, she’d worked with WebCT and Desire2Learn (another LMS) for several years, and thus could see that Moodle was missing some features (such as releasing courses with certain conditions attached or timed release).

How successful is Moodle adoption at the U of M? The total user base has 44,000 users and more than 2,000 sites in production (667 are in-use and active), which places the U of M in the top 2 percent of Moodle installations by user count. (As a point of comparison, there are about 2,600 active sites on WebCT yet at the U of M). (More statistics here).

Moodle at Eden Prairie Schools
While attending curriculum night at Eden Prairie High school (where parents get an introduction to teachers, curriculum and the overall high school experience) for our ninth-grade son, his American Studies teacher pulled up an orientation slide and talked about access “to our Moodle site.”

Since my son is in an enriched program with a remarkably challenging textbook (it’s even a dense, difficult read for his Mom and me!), having what our son needs online with Moodle means he can access all of his support materials from home whenever he needs it (and like most kids, he forgets stuff at school but can get it online now). 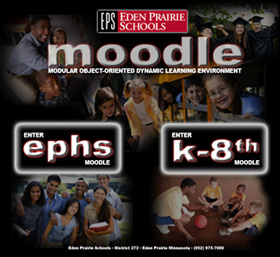 Eden Prairie News reporter Leah Schaffer wrote this article about Eden Prairie’s adoption of Moodle and comments by Dave Sandum where he emphasizes the collaborative and social aspects of the Moodle LMS and where they’re headed directionally:

“A classroom automation system” is how David Sandum would describe it. Sandum, the techonology director for Eden Prairie schools, said Moodle gives teachers the ability to organize and conduct entire lessons in classrooms electronically.

“[It] takes things to the next level where you’re able to basically work in a collaborative form.” It breaks down the traditional four walls of the classroom, to create “anytime, anywhere learning [and it] really puts the social networking elements into learning,” said Sandum.

Sandum said they looked at Moodle as a pilot to see if its adoption went well, as far as student learning. It turns out that they may go beyond Moodle. Sandum said their goal is to basically create and support, internally, an Eden Prairie MySpace for education.

In my discussions with various Eden Prairie teachers over the years — including one who was a favorite of both my kids and a credentialed educational technologist, the now retired Sally Knaeble — I was always taken aback with the almost laughable (and sad) lack of technology in the schools.

Outdated computers, lack of teacher self-publishing tools (K-6 and middle-school websites look like they were done in 1997, and blogs? What’s a blog?), inadequate portals and parental tools (like something as simple as shared calendars among teachers that we could subscribe to, and/or RSS feeds from pages), a $4.6 million annual bond referendum passed in 2004 with $2M each year for technology improvements is now bearing fruit. Ironically, the free Moodle software — with servers, support, training and other costs attached — is a smart use of this funding.

What impresses me more about both the U of M’s direction and Eden Prairie schools embrace of Moodle is this: a deep and profound recognition of the new paradigm of human and machine connection driven by the Internet; the demand for online access to information, materials and each other around learning; and the willingness to adopt OSS and discover how even learning can become more parallel and associative and begin to wean students off of the old ways of serial, linear learning.