As practically every man, woman and child in the Twin Cities must know by now, the Minnesota Interactive Marketing Association (MIMA) held its annual conference Wednesday, themed “Feed“. These folks are marketers — they know how to hype, as they’ve been telling us for what seems weeks now that the event was sold out. Prior to that, they promoted that it would sell out and the positioning was…so click and pay, friends, or you will never be able to live with yourself.

As you can see from Phil Wilson’s Unsummit post, there were those who ignored the hype and chose to do their own (free) concurrent event at a nearby pub, thank you very much. (OK, many of them were too cheap to pay the big MIMA fee.) And the MIMA folks actually cheered them on (even from the stage the day of the two events), since they felt bad they couldn’t have accommodated more people. But the venue — the very nice Depot downtown — could literally take no more. (MIMA has vowed to find a bigger site next year though that won’t be easy — maybe the Convention Center?) This year’s attendance, I believe, was something north of 700. MIMA’s membership is now about 950, but the Summit’s attendees also included some non-members and invited speakers, of course.

So, how did the event go? This was my first year attending (they have not given press passes to us lowly bloggers in the past), so I went courtesy of my employer, to do some serious working of the crowd. My assessment: The hype didn’t quite meet the reality as far as the overall content, as quality conferences go. But this is an association, after all, not a professional conference producer. And don’t we all kinda forgive a certain percentage of marketing build-up most of the time? Nonetheless, the logistics were handled quite well, and my hat’s off to the MIMA officers and their band of volunteers who pulled this thing off. (I’m sure they’ve worked out a lot of bugs over the several years they’ve sponsored this event). 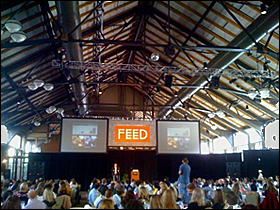 As with any event like this, I attend much more for the people, the networking, the connections, and that part was excellent. The chance to exchange notes and news with your peers, meet new folks in our amazing marketing and advertising community — and meet out-of-town speakers as well — made the event very worthwhile. As they say, it’s what goes on in the hallways that matters, not in the meeting rooms. In the age of Conversational Marketing, this was indeed a blab fest of the highest order.

The highlight of the day for most everyone was surely the lunch speaker, Ze Frank. This guy is a polished, well-coached and practiced speaker to large audiences (including the likes of the TED conference and other high-brow affairs), and he did not disappoint. The man is flat-out funny and entertaining. He’s a bona fide Internet celebrity since launching his first video (him dancing) several years ago, a video that went viral beyond all viral to that date. (He talked about getting a $30,000 bandwidth bill from his ISP after that experience.) See more about the Ze Frank Show at this page of his archived links or visit his blog at www.ZeFrank.com. (By the way, if you want to be cool, you pronounce his first name “zay.”) 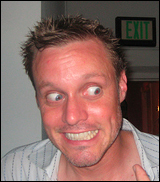 It’s a good thing Ze was so well received, because the earlier keynote, to open the event, was horrid. Note to planners: One hour is too long, and editors may write well, but that doesn’t necessarily mean they know how to speak. (I live-Twittered the event, here’s my archive page, with my screen grabs numbered 1-6, oldest first.)

So, what else did I pick up about the event, what was the overall buzz? Well, there were those who said it wasn’t “interactive enough,” which is an interesting take for a gathering of interactive marketers. But it can be hard to have participatory discussions with such a large group (impossible?), even in the breakout sessions — some of which easily drew 150+ in packed rooms with many standing. Choosing breakout sessions is always a challenge, and I missed some very good ones because, well, I had to make one choice each session. I’m sure many went away feeling the same. There were just too many not-to-miss talks scheduled concurrently (not good planning on the part of MIMA) — six each in two particular sessions! Way too difficult to choose, and jumping from one to another, to catch two concurrent sessions you like, just never really works.

Funny thing was, two other breakout sessions had four choices each and were largely duds — none of the choices had much appeal to me at all. So, I left feeling I missed what could have been some really good content. Example: I just had to attend “Mobile…2009 and Beyond” (which was good), but missed the concurrent session with the Zappos guy talking about “Making the Customer Connection in 140 Characters or Less” (that would be Twitter). But I made up for it by chatting with him at the cocktail reception later.

I was only able to catch two other breakout sessions: one on ad exchanges vs. networks (by Google), which was only mildly interesting to anyone except a media buyer, and another called “Marketing Mix Challenge,” which had four panelists describe how they would spend “only” $500k on a fictitious consumer product launch. I heard criticism later from people on that one who just don’t relate to the large agency world, which thinks $500k is a small budget.

But, all in all, it was as successful an event as each individual made it to be. And I made it a good one — lots of great new connections with whom I look forward to following up.