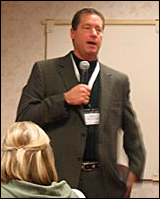 The monthly meeting of the Social Media Breakfast of Minneapolis-St.Paul, held at the PartnerUp Headquarters, also known as Deluxe, was anchored by author/marketer David Meerman Scott last Friday.

The bulk of his presentation centered on the need for companies to adopt social media and interactive methods of marketing for one simple reason: that’s where customers go to find what they’re looking for. He noted that whenever he asks any group, organization or gathering what its members’ habits are, when it comes to finding what they want, the web always affects nearly 100 percent or them, yet marketers still cling to those methods (direct mail, mass media, etc.) that have much less impact.

He calls the activity of using online and social media marketing as “Spreading the message by word of mouse.” There is a clear needfor businesses, individuals and marketers alike to “think like a publisher,” he said, noting, “We are what we publish.” What reason is given most often as to why a company or individual can’t do that? “We’re a [blank]! We can’t do that!” where the blank represents a company’s business practice or product.

He proceeded to highlight his Rules of the Rave as a road map to success in online media. Morsels included:

· Nobody cares about your services or products but you.

· Point the world to your doorstep.

· What do you have to lose?

All in all, the presentation, though “preached to the choir” in a room full of social media types, was very motivating to all present. His use of video examples (The Cadbury Gorilla, Where the Hell is Matt?, and CWS Toilets) throughout served to inspire the room as well as encourage discussion on how to “sell” media to individuals and businesses that are hesitant to get involved.

The following presentation from Partner Up CEO Steve Nielsen started with the “What business do you associate Deluxe with? (Checks and …well…checks!) Steve devoted his time talking about PartnerUp and Deluxe focusing on growing other business opportunities and products.

Overcoming the perception of Deluxe being only a check-printing business will be a daunting task but one that Steve emphasized was a focus that the company is dedicated to, at all levels.

On a side note: Steve mentioned that he felt that Deluxe was a bit “late” joining the social media ranks. I will assert that there is no way you can ever be late. Just as you can never be late to a conversation that you are willing to start.

The final presentation was given by Marty Wetherall and Aki Spicer, who presented Fallon‘s latest Twitter campaign for Eureka. They used what they called a “micro-budget” to launch @_S_A_R_A_H_, the Twitter name of the Self Actuated Residential Automated Habitat house on the popular geek TV show. If you’re not familiar with the show, S.A.R.A.H. is an artificial intelligence that runs the household of the show’s main character, Sheriff Jack Carter. Acting as both surrogate wife and mother, S.A.R.A.H. handles all the daily chores, helps Carter’s daughter Zoe with schoolwork and also provides emotional companionship.

The unique approach used for @_S_A_R_A_H_ on Twitter is that she — or it — personally responds to Twitter posts about the show and her … um … character. Even after much pressing, the boys from Fallon stuck to the story that S.A.R.A.H. actually does the responding and not a writer. This clearly highlights the challenge of being able to tackle the daunting task of giving a voice to a character 24 hours a day. Imagine the playbook for anyone who must serve as S.A.R.A.H. so that continuity is maintained.

Thanks to all associated with the presentation of the Social Media Breakfast, including Rick Mahn, Graeme Thickens, Deluxe, Partner Up and New Horizons Computer Learning Centers for providing many with a free copy of David Meerman Scott’s book, “The New Rules of Marketing & PR.”

It was a morning well spent. Look for the next Social Media Breakfast Nov. 20 at Best Buy featuring Jeff Pulver.