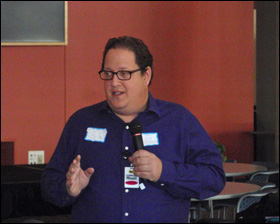 Thursday morning (11/20) saw another gathering of Social Media Breakfast at Best Buy headquarters. This was a “special” event presented by Best Buy, rather than the gathering those who attend the event each month have come to expect.

It was billed as “Breakfast With Jeff Pulver“. Jeff is considered a true VOIP pioneer and a very active enthusiast in social media or what he terms “Social Communications” … a term more fitting to this movement because it focuses on the act of communicating, rather than the medium through which we do it. He hosts breakfasts around the world and, as it appears, he is using them to practice Personal Tagging.

Upon our entry, we were all issued a Personal Social Networking Toolkit. Beyond a name tag, it provided us with the tools to “tag ” those we spoke with at the event. This can probably be best described by Jeff himself in this video — one he encouraged all to view before attending.

This tagging clearly defined Thursday’s gathering as a networking event, rather than a presentation. Jeff himself noted that he doesn’t usually speak at his breakfasts. In fact, his short address to the mostly standing group at Sandy’s Place in the Best Buy Hub was more of a bio, a “Here’s who I am” introduction.

Though I would have like to have heard a bit more insight from Jeff on the topics of social communication and the future of TV, a topic explored on his blog recently, it was a good departure from what we have come to expect from these sessions. The use of stickers to “tag” those that you spoke with gave it a nice spin. Glancing at my person “tag cloud” at the end of the event revealed everything from the obvious (tall) to the more cerebral (over-connected?).

Though it was a new twist on the Social Media breakfasts, it was well received. It also was more fun than the usual card swap that takes place while networking. Thanks to Rick Mahn, Best Buy, and especially Jeff Pulver for bringing us together! The next breakfast is slated for Dec. 19 with an agenda and location yet to be determined.

It should be noted note that Mr. Pulver generously donated his remaining Personal Social Networking Toolkits (Bic pens, stickers, and plastic bags) to the event …The man is clearly a giver.

Update: Mike Keliher shot the following video of Jeff’s remarks for those unable to attend… enjoy.

Jeff Pulver on passion and dumb luck from Mike on Vimeo.