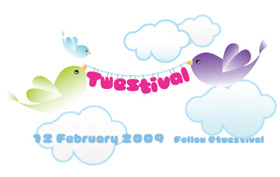 Organized by charity: water, the gathering at Moto-i was part of 200-plus city efforts worldwide. From Hamburg to Hong Kong, Dubai to Dublin and Madrid to Minneapolis, the organization’s goal was to raise $1 million to aid in its mission to bring clean drinking water to the 1.1 billion people (one in six) who don’t have access to it.

As the sake flowed and the sounds of Air Supply (really … Air Supply … no, really) wafted from the speakers, the Twitter faithful who weren’t glued to their screens or phones mingled and got to meet people they had probably only tweeted to on line. There was no shortage of conversation as the 140-character limit used on Twitter had been lifted from the relationships.

As of this writing, the final numbers of money raised at the event were not available. According to Minneapolis Twestival organizer, Andrew Korf (@andrewkorf) nearly $700 in cash was raised at the event, with more to come from online donations. On a more global level, charity: water, faced with the need to collect money from around the world and a Monday bank holiday, hopes to have final numbers by Tuesday or Wednesday. (Look for an update here.) According to charity: water communication and media representative Nicky Yates, “A million-dollar donation would mean clean drinking water for 50,000 people for 20 years.”

Beyond aiding fundraising efforts, Twestival is another example of what social media can do to raise the awareness of a cause or organization. The planning of Twestival, put together over a three-month to three-week period of time (depending on the city) brought new awareness to charity: water on a global scale.

Yates says, “We’re very excited by this entirely volunteer-organized event. There are now more than 50,000 people around the world who are aware of charity: water that weren’t before this event.”