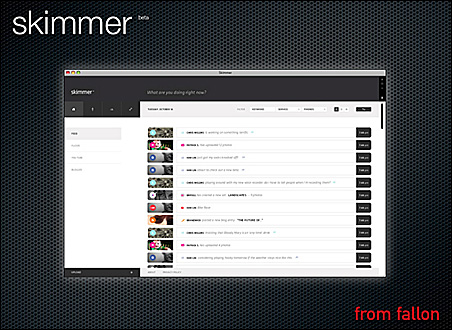 As social media and networking continues their advance and integration into the very fabric of our lives (which is especially the case as more of us become a part of the always-on, always-connected online culture) it continually intrigues us at Minnov8 at the approaches of many organizations.

Some still are taking a wait-and-see attitude toward the whole category while others have quickly become a part of the smart and select few taking calculated risks and subsequent bold actions.

We’ve seen very little in-between, even as the shift in marketing and communications has accelerated. Traditional media have down-trended rapidly while the use of social media and networking has increased dramatically (e.g., Twitter grows to 8M users).

Fallon, a division of Fallon Worldwide (a part of Publicis Groupe S.A., based in Paris), has moved forward with an innovative new lifestreaming application called skimmer. Lifestreaming is the practice of collecting one’s online digital breadcrumbs and presence — on sites like Facebook, Flickr, Twitter, YouTube or Blogger — within applications or services that enable us connected folk to bring all of our friend and acquaintance connections (and everything we’re each doing online in all of these various online venues) together in one central place and with a single, unified application.

What is skimmer exactly? As Fallon describes the value proposition for the app, it says, “Skimmer is an Adobe AIR-based desktop application that serves as a dashboard for a person’s social networks, saving people the time and hassle of manually checking Facebook®, Twitter®, Flickr®, Blogger® and YouTube® by consolidating their feeds into a single stream of real-time, relevant content on the desktop.” Skimmer was developed in conjunction with the firm that seems to be popping up everywhere, Sierra Bravo, and the application has performed flawlessly for the few days I’ve been using it and feels rock-solid.

I had a chance to to talk with Chris Wiggins, creative director at Fallon, about the motivations and strategy behind skimmer and what initially appeared to me to be fuzzy reasons why a creative brand agency would deliver such an application. I also wanted to potentially uncover whether the app it’s delivering is intended as a true value giveaway or just another scheme to surreptitiously give away a platform that would end up as another backdoor carrier of ad or messaging distribution.

We started off talking about the motivations behind why they moved in this application direction within the context of the down trend in traditional media distribution channels and the growing social-web shift to the need for brands to engage with their audiences. Most agencies aren’t moving forward. “In our industry, there are a frustrating number of ad agencies who are looking at the social web in a quizzical way and poking at it and wondering what to do,” Wiggins explained. “Those agencies aren’t spending their time experimenting or getting their hands dirty actually trying to sculpt what it is.“

He was clear that this experiment, “in the grand scheme,” is a small but important step for them to have taken, and illustrative of their drive to get their hands dirty and deliver something that has true value for the social web. As I discovered, the outcome they are moving toward from this effort and giveaway is all-around building of the Fallon brand and, most importantly, walking the talk they give to clients about the brand concept they’ve strategically aligned the agency around: branded generosity.

“Earlier this year, Fallon Minneapolis reached for the crystal ball. We didn’t like what we saw in the mirror. We had become schizophrenic, pitching new business under the banner of everything from ‘platform creativity’ to ‘challenger branding’ to ‘return on imagination’. We made the collective decision to call time-out. We stopped. We took a breath. We quit trying to fit words around an assignment, and stopped trying to read clients’ minds. Instead, we wrote down where the leaders of the agency saw the world going instead of what we thought could help us win the next pitch. We didn’t need another banner; we needed an altar — a movement we could all believe in.

We believe generosity is the recipe for modern branding.”

Those of us primarily in the web space would describe this concept as the “freemium” model (a business model which works by offering basic services for free while charging a premium for advanced or pro features) but it’s much more. Even though a free entry point for a web application is somewhat analogous to Fallon’s approach, the deeper meaning of branded generosity takes this concept to a far higher and broader level, ostensibly touching every single aspect of a brand and therefore can be a guiding principle behind delivering value to one’s prospects, customers, ecosystem or audience with the “return on generosity” being greater acceptance of the brand, more loyalty, deeper trust, perhaps delight, and all the other desired states brand builders struggle to attain.

THE PLATFORM
I was curious about why they chose the Adobe AIR “container” vs. using a dashboard vendor (e.g., NetVibes) or some other method for creating and delivering a lifestreaming social web application. We talked about the relative merits of each approach, and Wiggins was clear about why they chose AIR: “It’s a pretty safe bet. Especially at this point in AIR’s existence when they’re gaining such incredible momentum. I don’t remember the statistic exactly, but it was mind-blowing. Something like 10 million installs of Adobe AIR have occurred. (UPDATE: Adobe’s PR agency saw this article and sent a correction. AIR’s install base is not 10 million, but rather 100 million.) Add to that it works on all three platforms (Mac, Windows, Linux) and it was the clear choice.“

Though Fallon sets expectations in its FAQs that it won’t be able to provide support like an app developer would (it’s free, after all) it also points out elsewhere that it has a feature roadmap. And it says it will continue adding functionality to the app over time (including the possibility that it will deliver a “premium version” as well as a mobile version of skimmer). Fallon also has been receiving many feature requests and feedback so there is no question that it will continue to drive forward. Any further development will, of course, be dependent upon the level of acceptance of skimmer.

Though there are other Adobe AIR apps and web applications which deliver lifestreaming-like capabilities (e.g., TweetDeck or FriendFeed), the former is Twitter-centric and the latter is delivered as a webpage requiring a manual refresh. Skimmer is targeted at people who are engaged with multiple offerings on the social web (and whose friends are as well) and is meant to make engaging with all of these services and your friends in a more efficient and delightful way.

After our platform discussion, Wiggins wanted to step back for a moment and add something to the motivation questions I’d asked earlier. “Our overarching philosophy at Fallon is that for ad agencies to continue in the same direction — interrupting people with what they’re engaged in to deliver a message — isn’t effective now and is becoming less so all the time, especially with today’s socially connected people online. Interruptions work if the message is entertaining enough (which also hints at deeper meaning with the brand), but it’s just not enough and is far too limiting.“

He said it is their belief in the imperative that all brands must deliver deeper intrinsic value to people today that engages them far longer than those sorts of fleeting messages ever would. Obviously this is the key to them expending the effort and resources to deliver skimmer and why they harnessed their creativity, and that spirit of generosity, to give something to the social web community that would add value to our lives.

FREE VALUE…FROM AN AD AGENCY?
As soon as I downloaded and began to use skimmer, I instantly noticed the gray header area with significant open space. Same thing along the left sidebar column with a lot of open white space. Both of these areas were ones that I assumed would be space within the application in which Fallon (or clients who’d deliver ads or even brand this app to give away to their own customers) would target for ad delivery once a critical mass of skimmer users had downloaded, launched and were keeping the app open all day long.

My skepticism continued, since I’m acutely aware of the capability and momentum of other “containers” to deliver value (e.g., iWidgets; Sproutbuilder; BrightCove) and how most of these viral deliverables have, as a key part of their value proposition, the ability to track and quantify use (and where they’re embedded). I was thus fairly certain that there had to be some form of analytics behind the delivery of skimmer and the possibility to measure and identify location and presence by users.

As it turns out, these were faulty assumptions on my part.

Doing any of those would run counter to the entire meaning of their branded generosity philosophy and, as Wiggins so diplomatically pointed out, was “too obvious” and would be an unwelcome intrusion shunned by users and therefore be totally against their belief in that philosophy.

Upon reflection, I’ve realized that the folks at Fallon have completely immersed themselves in the zeitgeist of today’s social web and are making their strategic moves in an extraordinarily enlightened way and exhibiting true thought leadership in the ad agency space.

As we ended our discussion, I tried to probe a bit on what’s next with their strategy of branded generosity and what Wiggins thought was particularly exciting and cool at this moment. “Ahh … I’d rather not get into that at this time,” he said with a chuckle.

I suspect we’ll be delighted.