I’ve written before about my involvement with the Conclave, an organization that seeks to educate radio broadcasters. I had the pleasure of heading up the planning of the Tech/Interactive Track at this year’s Learning Conference (#clave09), held July 16-18 in Minneapolis. I’m thrilled that I was able to include many of Minnesota’s tech, interactive and social media “stars” as part of the agenda. 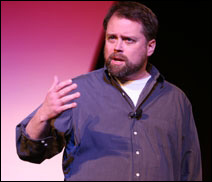 One of those “stars” is Gary Koelling, Best Buy’s social media guru and founder of Blueshirt Nation, Giftag and IdeaX. I asked Gary to talk with my broadcast brethren about increasing radio’s “signal strength,” a phrase Gary coined during a conversation we had some time back that refers to reaching customers through social media.

I met with Gary about an hour before his presentation because he wanted to show me what he came up with. I trust Gary implicitly to put together a great presentation on this topic … and he did. No surprise! I had expected to politely preview his slides, say “Cool!” and move on.

What I experienced, and what the attendees saw was a deeply personal story reflecting Gary’s passion for this medium and what it has meant to him over the years. He told me that every time he sat down to build his presentation, he found himself “yelling” at radio for what it has become. He told me, “That’s not helpful to anyone.”

So what he did was take everyone through the emotional relationship he has, and I bet all of have had, with radio.

“Other stations can steal your listeners,
they can’t steal your friends.”

What Gary did at the Conclave Learning Conference was remind broadcasters about the personal connection that they must maintain with their listeners to survive. A connection, or as Gary noted, a “friendship” that has become less important in a world where making their quarterly numbers is a priority.

Gary, thank you for taking an hour of your day to empower broadcasters by sharing your knowledge in such a personal and emotional way. They’re still talking about it … the next step is to act.

Here is Gary’s opening “story”. See the slide deck (though I think the picture you see in your mind will be better) on Gary’s blog.

I remember as a kid growing up in the ’70s in the middle of a corn field in Iowa feeling radio was the one thing that reliably connected me to the broader world. Locally as in the world, “in town” but also the world beyond. Listening during the long summer breaks to KWAY and the daily “Swap and Shop” and lives coming together, lives falling apart. Revealed to me in the items that people needed or needed to get rid of. The stories of lives beginning and lives ending and unexpected twists and detours in otherwise normal, boring lives were told in elaborate and veiled detail from 11 to 1 every day.

I stepped up and said, “Could you play ‘Refugee’ for Christie.”

“What song you want played?”

And my chest felt full of hot blood and breath and my face was hot red and I got on my 10-speed and pedaled hard up the road with a radio hanging over the ram horn handlebar of my bike. I prayed I could get to Christie before the DJ played the song.

I wanted to see her face. Take credit. Get laid. But Christie wasn’t home. I hung out under the tree across from her driveway, heart beating frantically, hoping that the song wouldn’t come on. Then her mom’s car crawled up the road and slowed as it passed me and pulled into the driveway. I played it cool as her mom squinted over the wheel at me, the radio playing as it hung from my handlebars.

I practiced in my mind how I would tell her that I requested the song for her. Her favorite. That I thought I was falling in love with her. And we’d kiss.

That afternoon, we talked for hours and hours feeling half-drunk from the smell of sun and pool water and sweat and faint cigarette smoke that only a 15-year-old girl can twirl together into the sweetest perfume a 15-year-Old boy would ever smell.

Then, as the fireflies came out and the sun got low, she had to go in for dinner. I rode home slow. And the song came on. And that heavy, hot blood and breath came back into my chest. And then I was a teenager. A teenager as free and angry and in deep and desperate as any had ever been and protected only by a transistor FM radio.