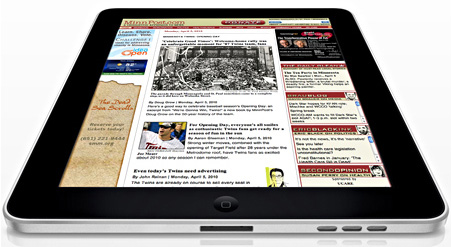 The Apple iPad was released on Saturday morning and if you pay any attention to the news, are part of the online social media world or have a gadget lover in your family or friends network, you couldn’t help but be bombarded with the buzz about this new device, one that Apple CEO Steve Jobs termed “magical” when he unveiled it just a couple of months ago.

Within an hour of its unveiling, Apple had updated its website so that every geek, Apple fan and interested competitor could see precisely what sorts of technologies it had or was missing. Cries ranged from “There is no webcam in it!” to “What? No USB?” to the biggest issue people have, “Huh? It won’t play Flash, even though most videos online are in Flash!?!” There also was a refrain that became all too familiar in the weeks leading up to its release, “It’s no big deal since it’s just a big iPod Touch.“

The tech pundits also were quick to point out why this tablet was going to fail and we saw many articles on technology news sites and blogs with opinions proliferating like crazy (either for or against the success of the iPad) even though none of these people had actually touched one.

All that changed on Saturday.

The Minnov8 Gang (me, Tim Elliott, Graeme Thickins and Phil Wilson) met at the Apple Store in Southdale on Saturday at 9 a.m., a time we usually recorded our weekly podcast anyway, in order to record it right there in line (see “Minnov8 Gang 73: Minnov8 Meets the iPad“). Graeme had reserved an iPad for himself, and we other three wanted to touch, feel and discover whether or not all the hyperbole about the iPad true either way.

Suffice it to say, we were all very impressed. Besides using all the applications Apple had pre-loaded on the demonstration iPads in the store, I viewed Minnov8, MinnPost, Google Reader and many other sites that I view daily on either my laptop or primary machine (a MacPro with 24-inch display). How did they look and function? Gorgeous and highly functional. I was a bit concerned that dropdown menus and such wouldn’t work well as I tapped the screen with my big fingers, but it worked flawlessly.

Of course, only those videos served by YouTube worked (YouTube automatically substitutes the iPad friendly H.264 video version instead of the Flash version) but the Flash ones did not. Most of the items I wanted to view and read were perfect.

The machine was incredibly fast and responsive. You can get a sense of what we experienced in this video by Minnov8’s Phil Wilson:

For much of the rest of the day, I periodically viewed Techmeme (an aggregator of technology news) and read dozens and dozens of top technology writers’ perspectives, opinions from developers of applications for the iPhone and iPod Touch, and many others who’d purchased one and had a few hours with it under their belts.

There was much talk about “the new paradigm” that this iPad represents, one that is far less complex to use (even novices find that the touch interface on the iPhone and iPod Touch is simple enough for a 3-year-old to use) as well as a lot of discussion about science fiction writer/technologist Cory Doctorow’s missive about the closed nature of the iPad (and iPhone/iPod Touch) from last week titled, “Why I won’t buy an iPad (and think you shouldn’t, either)“.

All of this buzz on both sides says one thing to me and many others with whom I’ve spoken about the possibility of the iPad succeeding or failing: The iPad is a revolutionary and paradigm-shifting device. While computers of all kinds have continued to grow in complexity, require ongoing maintenance of the operating system and tasks like “defragging” the hard drive to maintain optimal performance, these touch devices simply work and are more along the lines of a computing tool everyone had hoped the personal computer would become.

Apple has announced that it “…sold more than 300,000 iPads in the United States as of midnight Saturday. These sales included deliveries of pre-ordered iPads to customers, deliveries to channel partners and sales at Apple Retail Stores. Apple also announced that iPad users downloaded over 1 million apps from Apple’s App Store and more than 250,000 ebooks from its iBookstore during the first day.”

So does that mean the iPad will be successful or not?

Let’s compare those first weekend sales to the touch-screen iPhone, a less expensive device that Morgan Stanley’s analyst Mary Meeker calls the “fastest ramp-up in sales of any technology ever sold” and one that some say proved the possibilities for touch devices and paved the way for the iPad.

When released in June of 2007, it took Apple 74 days to sell 1 million iPhones. One year later, they introduced a faster, more fully featured iPhone which sold 1million devices in the first weekend. Since only the Wi-Fi models were available on opening weekend (and, for example, both Tim Elliott and I are waiting for the arrival of the three models that have built-in chips to run on the 3G cellular network) it’s highly likely that if all models had been available, sales would’ve been substantially higher, but I also need to point out that Apple sold 300,000 iPads in one day, not counting Sunday sales.

The only way you’ll be able to make up your own mind is to go in to an Apple (or Best Buy) store and use one. Try out the applications, look at favorite websites and give it a whirl. I’m going to bet you’ll either buy one or figure out when you can … it’s that phenomenal.