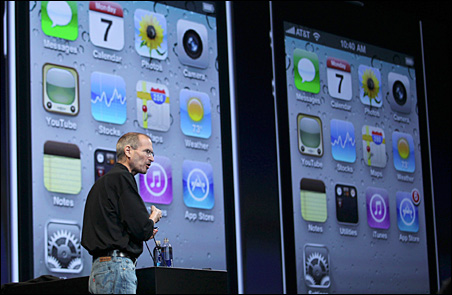 As Minnesotans continue to embrace the always-on and always-connected online world, there is no question that our ability to richly communicate with one another, be more productive, work when and where we want to, and have the world’s knowledge at our fingertips (provided our mobile carrier connection is operational!) took a big leap forward Monday with Apple’s introduction of iPhone 4.

Taking the stage at Apple’s Worldwide Developers Conference (WWDC) Monday, CEO Steve Jobs unveiled the new iPhone, a product we unfortunately had already seen in some detail because of April’s leak at tech site Gizmodo. Even so, it still has been eagerly anticipated.

Priced at $199 for 16GB and $299 for 32GB (same as the previous generation 3GS now priced at $99) iPhone 4’s features are impressive: a 5-megapixel camera (which Jobs said was technically far superior to other smartphone manufacturers with even more megapixels); a camera in the front for videoconferencing and one in the back for photos; the rear camera lit with an LED flash; and recording software for HD video capture; and a 960 x 420 display that’s roughly twice the resolution as the 3GS model, now rendered permanently inferior to this new model with its cutting-edge features.

The operating system driving this new phone, dubbed “iOS4” instead of “iPhone OS 4” since it will also be available to run the iPad come fall, adds multitasking, clustering apps in “folders” and more. These features are key to keeping up with competitors — like that of Google’s Android operating system running devices such as the recently shipped HTC Evo 4 — but many pundits and bloggers are dissecting Jobs’ keynote, and some are wondering if this new hardware and software will be enough to stave off competitors (like Google) and keep the iPhone sales momentum going?

According to analyst firm Nielsen in its “iPhone vs. Android” report, “As of Q1 ’10, Nielsen data shows that 23% of mobile consumers now have a smartphone, up from just 16% in Q2 ’09. Between Q4 ’09 and Q1 ’10, Android and iPhone’s share of the smartphone market grew by 2% each. At the same time, smartphone leader Blackberry lost 2% share to fall to 35% of all smartphones while Microsoft’s Windows Mobile OS also lost 2% to fall to 19%.“

These data certainly indicate that Google is accelerating and iPhone sales continue to grow — though this data was compiled before Monday’s iPhone 4 release, as well as Friday’s introduction at Sprint of the HTC Evo 4.

About the Sprint HTC Evo 4 release — a smartphone that runs Google’s Android operating system, Fortune magazine wrote Monday that “Friday sales of HTC EVO 4G marked the largest quantity of a single phone sold in one day ever for Sprint — the record was previously held by both Samsung Instinct and Palm Pre. In addition, the total number of HTC EVO 4G devices sold on launch day was three times the number of Samsung Instinct and Palm Pre devices sold over their first three days on the market combined.

So, take the two previous record holders, tally up both of their sales for their first three days. The EVO sold three times that total in just one day. Estimates were for 50,000 to 100,000 Pres at launch so that would put EVO somewhere between 300,000 and 600,000 units.“

Pretty impressive numbers, and it shows that the iPhone — the now “old” 3GS or this new iPhone 4 shipping June 24 — has good competition from Google and the handset manufacturers who’ve opted to leverage the Android operating system. Although Google’s debut in the smartphone OS space is intriguing, counting out Microsoft, RIM (Blackberry), Nokia (and what HP might do with its recent acquisition of Palm) would be a mistake since each has strengths that will likely see each of them growing market share in the mobile arena.

That’s an open-ended question without a specific answer, but suffice to say that the dozens of heavy-use iPhone customers I know are all going to upgrade to iPhone 4 (as am I). Using the HTC Evo 4 last evening at a Best Buy store, I found it clear that the operating system is nowhere near as elegant and responsive as the iPhones, though I’ll admit it had a better display and camera and was faster than the iPhone 3GS I had in my pocket.

Comparing the brand-new HTC Evo 4 (currently state of the art in Android phones) with my “old” 3GS version isn’t a fair comparison. A better one would be comparing the HTC Evo 4 with this new iPhone 4. Doing so will demonstrate that Apple just made another quantum leap forward in a smartphone experience, which is likely to continue to accelerate Apple’s sales of iPhones within the globally growing mobile category.