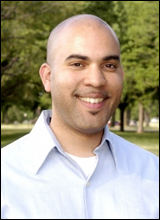 Last week, Minneapolis School Board Member Chris Stewart announced he would not seek a second term in office next fall. While Stewart’s tenure garnered more than its share of controversial headlines, ultimately his decision came down to his desire to help lift children and families out of poverty.

Stewart, 42, is a self-described evangelical social conservative and the father of four. A native of New Orleans, he has a background in workforce development. That includes a stint at a private employment agency and with the state Department of Employment and Economic Development, where he described his avocation as “helping people find pathways out of poverty.” He currently works as a consultant.

MinnPost: You were elected to the Minneapolis School Board as a conservative reformer in 2006. At that time, you were a firm believer in competition among schools as a mechanism to promote change. Is that still true?

Chris Stewart: Early on I would have said that there was a government monopoly in education and that the best way to create change for kids was to inspire a lot of competition and treat education like a market. I no longer think that competition is appropriate for many reasons. The most compelling one is that education is not necessarily a market. A business must concentrate on its most profitable customers. Public education has to serve everybody, even more so those kids who have less of a chance of being successful.

We have choice, and we have a substantial achievement gap still. You have to ask yourself: If something’s not working, is your strategy to do it more?

MP: But school choice was conceived precisely as an “out” from failing schools.

CS: I believe deeply parents should have different options for their kids. One size does not fit all when it comes to children. So I still fight for that. The thing that gives me a lot of problems intellectually is that the more we try to reform schools, the more we do these half-hearted measures instead of fixing the real thing that’s broken.

We haven’t rethought public education since the Industrial Age. We have not really rethought what school should look like to produce kids who are ready for life, not ready to do well on tests. So we come up with these half-hearted reforms.

MP: You are referring here to the controversial $4.3 billion in education incentive grants the Obama Administration has offered to states that can show they are making progress on reforms tied to accountability. Are you concerned that the districts best positioned to receive Race to the Top money are those that need it the least?

CS: Exactly. I’ve said it before, it’s the intellectual equivalent of a bum fight: desperate, hungry people fighting for what we should have given them in the first place.

MP: Was there a “light-bulb moment” in this change of heart?

MP: What one concrete policy change would you advocate?

CS: The number of teachers makes a difference. You hear parents talk about class size. Class size doesn’t matter until you get it down substantially lower than our average right now. The only way that I can think of doing that is by doubling the number of teachers. Give them free education if they agree we can say where they teach. Give them more support and ongoing training. Create a nationally developed, universally agreed upon evaluation that can be used to help improve teaching.

When [Bill] Clinton came into office in the early ’90s, he put 100,000 new cops on the streets. If he’d put the same number of new teachers in urban school districts, it would have gone a lot further.