Roy Magnuson, 55, is a longtime Como High School social studies teacher and coach. He started working for St. Paul schools in 1980 as an educational assistant, began teaching 1992 and has coached football, wrestling and track most of those years. He’s also worked with the Wilder Foundation helping at-risk kids. “At heart, I’m a teacher and a coach,” he says, but quickly adds, “and my political stuff is what I believe.”

We talked about how this teacher-coach got involved in politics and how it influences his work in the classroom.

MinnPost: You have a reputation for being pretty involved in the DFL and progressive causes. You worked on all of Paul Wellstone’s campaigns.

Roy Magnuson: I was engaged mostly in ’96 and ’02. I did volunteer in 1990. Where I come from is neighborhood activist to party activist to labor union activist with the St. Paul Federation of Teachers Local 28 and then into Progressive Minnesota. What ends up happening for me is I become many people’s favorite old guy. I get calls. I’m meeting with Dan Powers’ campaign [running for Congress in the 2nd District] and I’m going to meet with Dr. [Maureen] Hackett’s campaign in the 3rd District. Two years ago I got extremely involved with Ashwin Madia’s endorsement race [in the 3rd District].

MP: That started off with you giving advice? 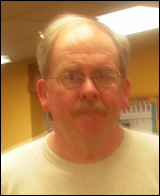 RM: I was able to give him some advice about the importance of getting people to come out to caucus. Ashwin got people to come out because of him, and that ended up being a difference in his race. Sen. Terri Bonoff, DFL-Plymouth, was figuring it’d be more of the same usual suspects and she knew most of them. Ashwin figured more people are coming. That’s how he won [the DFL nomination]. Ashwin had almost 75 percent of the delegates that are elected by people who came to caucus.

MP:  What was the first campaign you were involved with?

RM: My older brother running for state representative in 1976 when I was just a kid.

MP:  Where was that?

RM: In St. Anthony Park [in St. Paul]. He lost and I dropped out of doing stuff like that and came back in 1990 with Wellstone.

MP:  What explains the 12-year drought in your involvement with campaigns between your older brother and Paul Wellstone?

RM: My brother ran as a Republican, so I had to do my penance in the wilderness. And he had thought he might run again. His blood is pretty thick. It wasn’t until ’82 when I said, “I can’t work with you, you run as a Republican. Sorry.” 1984 was one of those cycles. The Democrats were still dominated by the remnants of the Mondale old DFL. Nothing moved me. But in ’90 it was the “three W’s.” Gene Waldorf was a good Democratic senator but was pro-life. The Webster decision was set up as one of the first chippings off of Roe v. Wade. The most crucial “W” was Wellstone.

MP:  Were you working on Wellstone’s campaign before or after his DFL nomination?

RM: My wife and I went to caucus for him. I ended up having one of those great deals where I was sitting front row and Paul came to talk. His son wrestled in Northfield. His son’s practice partner wrestled one of our kids at the state tournament. We talked about Mark [Wellstone] and he remembered our kid. Ironically, the next year, when Mark went to Apple Valley and won the state championship, the closest he came to losing was wrestling one of our kids, who tied with 5-5, with 30 seconds left in the match and both on their feet. Mark ended up scoring the takedown to win.

MP:  There are sometimes rumors around Como that you were one of Wellstone’s speechwriters.

RM: When he shows up at your own wrestling matches, people pay attention. I would always laugh and sort of roll my eyes when I heard things like that.

MP:  How would you describe yourself ideologically?

RM: I’m a social and economic justice Democrat. My dad took me to see Dr. King when he spoke at the University of Minnesota campus in ’67. One of my dad’s best friends was a Freedom Rider on one of the buses after John Lewis‘ was set on fire. A part of my upbringing led me to that.

MP:  Do you bring your involvement to the classroom?

RM: I don’t feel like I have to hide my political beliefs as some teachers do. Students know what I do because there are activists at Como. I live two blocks from [Como High], so it’s not like I’m a secret. We always have a handful of kids that are proud Republicans. In the last 10 years the most prominent of those have always been kids that invite me to their graduation parties and stay in touch. I don’t believe my job is to turn out a cadre of activist youth, but I don’t turn down the opportunity when they ask.