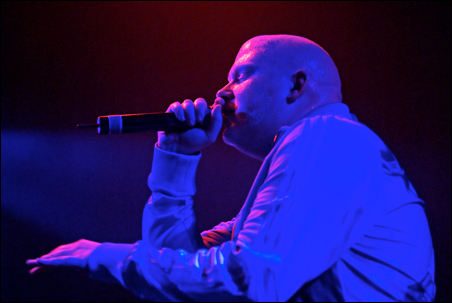 Photo by Daniel Corrigan
Brother Ali: “I really wish I had finished up [high school]. … A lot of people are like me — they have a need to worry about their here and now more than the future.”

At 33, Brother Ali has put out six lauded hip-hop albums, played to SRO crowds on several continents and made repeat appearances on national television. Legally blind and albino, he has two kids, a jillion Twitter followers and is active in a North Minneapolis mosque.

In his spare time, he’s studying for his high school diploma. Celebrity notwithstanding, he wants young Minneapolitans who’ve drifted away from school to know how much he regrets not getting it the first time around.

At the request of Minneapolis Public Schools and Mayor R.T. Rybak, today Ali is filming a public service announcement for “We Want You Back,” a campaign by the school disrict and the city’s Youth Coordinating Board to lure recent dropouts back to school. (A colleague of Ali’s, rapper Slug of Atmosphere recently taped his own spot with Minneapolis Superintendent Bernadeia Johnson.)

Over the next two months, the program hopes to recruit 600 community volunteers to bang on doors, text, tweet and call — or rap — to 2,000 Minneapolis youth who aren’t currently enrolled in school. The goal this year: Re-enroll 200.

By even the most optimistic calculations, only two-thirds of Minneapolis Public Schools students graduate. The majority of them are poor and minority; for most, the lack of a diploma poses much bigger lifelong hurdles than it has for Ali. (Full disclosure: Ali works with my brother.)

In an interview with MinnPost, Ali opined that trouble landing a decent job is only the most obvious problem facing those who don’t graduate. He’s worried about Minnesota’s achievement gap between minorities and whites — one of the worst in the nation — but he’s also concerned about democracy, creativity and tolerance.

Here’s a condensed transcript of our conversation:

MinnPost: When you were asked to get involved in “We Want You Back,” what made you say yes?

Brother Ali: When people ask me to do stuff and it’s for a good cause, I almost never say no. But this one spoke to me particularly. I got married when I was still in high school, and at the time, I thought it was more important for me to get an apartment and work two jobs and stuff like that than finish high school.

They actually tried — the school [Robbinsdale’s Cooper High School] reached out to me during that time and gave me the option to go to summer school and finish my degree. They let me walk in the graduation. My mom had a party for me and everything.

I still had two classes to make up in summer school. I finished one. The other one was a required class, and I made it all the way to the end. The last thing was a report and I wrote the report. That was always my strength in school, writing reports. I turned it in and it never came back, and I assumed that I was good. And I wasn’t.

Maybe seven or eight years after being out of school I tried to get a copy of my diploma, and they informed me I didn’t get it. I didn’t really think too much of it. I had already been touring and I was doing fine.

But I recently read the memoir of my favorite current scholar, Dr. Cornel West [a Princeton professor and author most recently of “Brother West: Living and Loving Out Loud”]. He was talking so much about this really deep education … an education that stirs something inside you and makes you want to be a better person and just really increases your base of knowledge and awareness.

It was a combination of reading his memoir and hearing what his education has done for him in terms of enriching his life and feeding his calling that he believes he has in life, which is to encourage people to learn and question.

That really inspired me, and I’m like, “Man, I’m gonna go to college.” So I have been preparing to take my GED test.

I really wish I had finished up. I think a lot of people get really close, and just for whatever reason … A lot of people are like me — they have a need to worry about their here and now more than the future.

MP: You’ve tweeted a lot about the controversy surrounding a proposal to build a mosque near the former site of the World Trade Center in Manhattan.

Like the “Ground Zero mosque” issue. I say that with quotations because it’s not a Ground Zero mosque, and calling it that actually was done very intentionally to make an issue where there shouldn’t be one. It’s four or five blocks from the site. You can’t see Ground Zero from the mosque, or won’t be able to see it.

After it became an issue a group of Muslims said, “OK, well if you’re going to make it this issue, this proximity to Ground Zero, let’s really make this a community moment. Let’s make this a teaching moment. Let’s show you what it really means to be Muslim and to participate and contribute to this society we live in. Let’s use this terrible tragedy to create a dialogue that should have been happening all along, so you can see that we are humble people who love God.

Since it’s Ramadan, I’ve been re-reading the Quran cover to cover, which is a custom every year. In Ramadan, you have a month, so you divide the Quran up into 30ths and you read a 30th every day. It’s the only book where God specifically says there are believers in other religions and you should respect them as believers.

It specifically mentions Christians and Jews but really says that anyone who believes in … being accountable for the way that you live your life we should value equally with ourselves. Muslims really do believe this and live our lives like this, especially in pluralistic societies like this.

MP: Where do you want to go to college?

BA: I haven’t decided yet. Cornel West teaches at Princeton, so that seems like a good place. With a GED, I would be surprised if they took me. But I have a certain gravitas that makes me want to apply there.

It seems like a hopeless thing, but so was being an albino rapper from Minnesota — and that’s kind of working.

Brother Ali: Don’t let all ‘the stuff of life’ get in the way of an education