She cites the capital city’s new $500,000 Promise Neighborhood grant from the Obama administration and continuing work on Central Corridor light rail as two high-priority projects sure to keep her and the mayor’s staff busy in coming months.

Dady grew up in St. Paul’s Highland Park neighborhood and graduated from Visitation High School before getting a political science degree from Northwestern University.

She took a semester off to work as a field organizer for Sen. Paul Wellstone in 1996, and her first job out of school was in Washington working for Congresswoman Jan Schakowsky, a Democrat from Illinois. 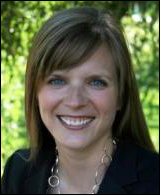 She’s also worked for the Democratic Congressional Campaign Committee in the 2000 election cycle, helping in 50 targeted races around the country. One of those races was Congresswoman Betty McCollum — who went on to win her first election. Dady then went to work with McCollum, first as an education aide, then as political director.

She served as Chris Coleman’s finance director in his run for mayor in 2006, and then was appointed city marketing director in February of that year.

Although flooding on the Mississippi River has demanded much of her attention in these first weeks on the job, Dady was very upbeat in answering some questions about her jobs — new and old — and issues facing the city. Here is an edited, condensed version:

MinnPost: What are the mayor’s top priorities for the next year — the things you’ll be spending much of your time on?

Erin Dady: St. Paul [recently] received a $500,000 Promise Neighborhood grant from the Obama administration. The Coleman administration has put education at the forefront of our agenda, working to build a city that surrounds our children with the tools they need to be successful in life, and this grant recognizes the great partnerships we’ve built towards that goal. We’ve become a national leader in the field for building a new model of collaboration to provide kids in St. Paul a quality education, both in and out of school.

We will also continue shepherding the largest public works project in state history, working toward completion of the Central Corridor light rail line in 2014. During construction, it is crucial to support our businesses on the corridor and ensure they thrive after the project is completed.

MP: As marketing director, what were your big successes?

ED: Our highest-profile success was securing the bid to host the 2008 Republican National Convention (a little-known fact is that we were on the verge of landing the Democratic National Convention that year as well). By working together as a region, we proved we could compete — and win — against cities like New York for high-profile events.

Other big successes were landing the movie premiere of “A Prairie Home Companion” in downtown St. Paul and, more recently, the Red Bull Flugtag on Harriet Island. We planned for 40,000 people, and 90,000 showed up. I will never forget seeing all those people packed onto Harriet Island and on boats on the Mississippi River, cheering as a world-record flight took place — it was a great day for St. Paul.

MP: How have the tough economic times affected big projects, like the Penfield development and others?

ED: Mayor Coleman recently launched Rebuild St. Paul, which will allow us to move forward with 15 economic development projects, including the Penfield and a downtown Lund’s grocery story, and stimulate growth in every corner of the city. It is time to put our residents back to work and by utilizing every tool we have, we will position St. Paul to lead the nation out of the recession. Rebuild St. Paul utilizes an array of economic development tools, getting projects off the drawing board and cranes into the air.

MP: What about the smaller initiatives, things that didn’t make the news?

ED: Everywhere you look … from the variety of programs being offered everyday in our rec centers and libraries, to news this week that we received a $150,000 grant for solar panels at the new Como pool.

MP: What roadblocks did you encounter while trying to market St. Paul? Is it tough competing with Minneapolis? Are people afraid it’s too cold here?

ED: Mayor Coleman and Minneapolis Mayor R.T. Rybak have set the example nationally that regions are stronger when cities work together. For example, our region was recently selected to host the 2015 Senior Olympic Games, an event that will draw over 35,000 people to our region. St. Paul, Minneapolis and Bloomington worked together on the bid for the event, illustrating that when our region works together, we can not only compete with other major metro areas, we can win.

And as for people being afraid of Saint Paul being too cold — we are in the State of Hockey, home to the Minnesota Wild and the Winter Carnival — we embrace the cold.

MP: What was learned from the RNC experience?

ED: We learned that this community has incredible capacity … to work together on a complex project … serve one another and … shine on an international stage.

MP: What other political issues are you involved with?

ED: Some of the political work I’m most proud of didn’t happen at work. I’m on the board of WomenWinning, [a political action group that supports pro-choice women running for office at the local, state and national level]. We’ve raised millions of dollars for hundreds of candidates, and we’re changing the face of government in Minnesota.

MP: Was there a transforming moment or event in your life that led you into politics?

ED: I always dreamt of becoming an engineer and grew up as math student until I spent summer after my junior year in high school on the floor of the U.S. Senate as a page. … It was the summer of 1994, when they were debating the the Clinton Health Care bill.

Sen. Dave Durenberger sponsored me as a page — Sen. Wellstone didn’t have the seniority to have a page at that time. Years later, I sent Sen. Durenberger a note, thanking him and mentioning that the experience changed my life and that I was now working in politics. He replied, asking: Sometimes, don’t you wish you were an engineer?