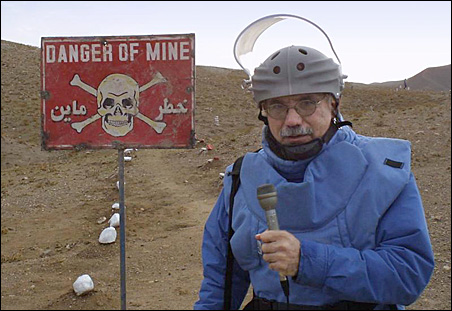 Courtesy of Reese Erlich
Reese Erlich in Afghanistan, doing a story on de-mining.

Is everyone who flies a plane into a building a terrorist? Not necessarily in the eyes of the law. Some who have tried it are nut cases. Others are, indeed, terrorists by commonly accepted American definitions.

Reese Erlich challenges you to examine those definitions and think about the differences. Since 2001, the definitions have been shaped in ways that square with the government’s priorities. But too often, Erlich argues, they have led to logical and legal inconsistencies — not only in conflicts around the world but here at home too, even in Minnesota cases.

When a book tour brought Erlich through the Twin Cities this week, he talked with MinnPost.

MinnPost: Please help me explain the substance of your book.

Reese Erlich: “Conversations with Terrorists” profiles six Middle Eastern leaders, some of whom are accused of being terrorists. I profoundly disagree with some of them in some cases. But they really are not terrorists. It explains why the label terrorism doesn’t fit.

MP: So it challenges the use of that label?

MP: Let’s talk about cases in Minnesota. For example, the FBI recently raided homes of several peace activists, and the activists were called to appear before a grand jury in Chicago. The suspicion, as I understand it, is that they gave material support to terrorist organizations. What do you think about that?

MP: What do you mean by that?

RE: Donating money to a Palestinian orphanage that might have some connection with Hamas, for example, has been defined as material support for terrorism. … It’s completely outrageous.

MP: Here’s another close-to-home example. When the Republican National Convention was held in St. Paul, eight self-described anarchists were arrested and initially charged with activities related to terrorism under a Minnesota version of the Patriot Act. Many months later, that charge was dropped.

RE: For the RNC and the Democratic convention as well, there was a total manipulation of the laws to engage in preventative detention … bringing up these phony charges and then dropping them later. If North Korea were to arrest protesters, the United States would be outraged — I say, outraged — at this violation of civil liberties. But when the United States does the same thing we say, ‘Well that’s OK because we stopped anarchists.’ … By the way, I disagree with anarchists, but calling them terrorists was a very conscious manipulation of people’s emotions in this country.

MP: The term also is applied to radical groups like the Animal Liberation Front. Do you see that as appropriate?

RE: No. If people engage in illegal activities, they should be prosecuted, and it should be proven in a court of law that they did something illegal. I don’t agree with people who plant firebombs in the offices of scientists who are doing experiments with animals. I don’t agree with the animal experimentation either, but there are ways to deal with that besides blowing them up. If, in fact, somebody did that, the person should be charged and the evidence should be presented. … We all learned in high school that what separates the United States from totalitarian regimes around the world is that we have a fair judiciary.

MP: What you are saying is that these activities should be treated as crimes and that the specific behavior should be prosecuted — that the terrorist label adds nothing meaningful. 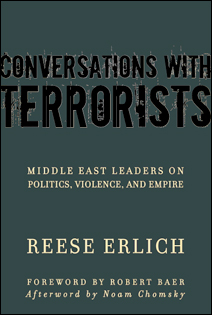 RE: Yes. Prosecutors know full well that if they charge somebody with terrorism it is going to bring in a lot more headlines and maybe they will be able to prejudice the jury with images of the wider war on terrorism. To me it indicates that they have a weak case on the underlying charges.

MP: In one more local example, Somali men in Minneapolis were recruited by the Islamist militant group al Shabaab. Would you say that the cases of people who helped recruit them and finance their trips to Somalia are legitimate prosecutions of support for terrorism?

RE: It’s obviously a trickier case because al Shabaab is a fairly reactionary, violent movement. But I’m reminded of the fact that plenty of Nicaraguans and Salvadorans were recruited and trained by the United States to go fight against the legitimately elected governments of their countries in the 1980s. No charges of terrorism were brought against them. The United States has to be consistent. If it is going to charge Muslim activists of being terrorists for these kinds of activities, then it should be charging Cubans in Miami who are organizing attacks on Cuba in the same way.

MP: Where do you draw the line?

RE: Let’s take a controversial example from my book. I interviewed Khaled Meshal, the leader of Hamas who is living in Damascus. Hamas is a religious-based, conservative organization. If I were a Palestinian I would not vote for them nor support them because they are not going to build the kind of society that I would want Palestinians to have. And they have engaged in terrorist tactics in the past.

Hamas, however, won the 2006 Palestinian Authority elections, fair and square, and they have a significant popular base. So labeling them as terrorists does absolutely no good except to try to demonize them. They are a political force that has to be dealt with. And ultimately the Palestinians themselves have to decide which political party they want to rule them.

The question of the tactics they use is secondary.

MP: So your personal line is?

RE: It’s the distinction between — say, Hamas and al-Qaida, which is a tiny handful of people that has almost no support in the Muslim world, and whose goals are totally out of whack with reality. Therefore, al-Qaida’s violent tactics become their defining ethos, if you will. They intentionally kill civilians as part of this out-of-reality view of the world.

More information about Erlich’s latest book and his dispatches from around the world is available here.

Sharon Schmickle covers international affairs, science, economics and other topics for MinnPost. She can be reached at sschmickle [at] minnpost [dot] com.

Who should — and should not — be defined as a terrorist?