Minnesota Opera gained more than a new president and general manager last week. Besides being an accomplished arts administrator, 38-year-old Allan Naplan has been a professional opera singer and an award-winning composer whose “American Anthem” was picked to be the inaugural wake-up song for NASA astronauts on Space Shuttle Columbia. He was chosen out of about 90 applicants, according to a member of the search committee.

Naplan, a Massachusetts native who will replace Kevin Smith here in March, has served the past six years as general director of Madison (Wis.) Opera. During his tenure there the 50-year-old company went from two to three productions per season, achieved record box-office sales and instituted numerous outreach programs including an educational series titled “Opera Up Close.”

We spoke recently with Naplan at his office in Madison, where his company had just finished a production of The Marriage of Figaro” and was preparing “Three-Penny Opera.”

MinnPost: Did you have to think long and hard about taking this position?

Allan Naplan: I didn’t. This is a company I’ve respected and watched for a long time. The idea that I would be tapped is such an honor and opportunity. And the community played a part in the decision, too. I’m a family man with two small kids. Everything we know about the Twin Cities is so attractive to us.

MP: You trained as both a singer and composer, which is rare. And a third element, even more rare, is arts administration. Did the yen for management start early or did that come later?

AN: It was pretty early. When I was in college, thinking I was going to be an opera singer, I worked on my winter breaks as an intern for the Boston Lyric Opera. My intention was to become a smarter singer. I learned a lot, and so I was easily turned on to the other side of the curtain. I felt I was a good baritone — perhaps not a great one. So the impact I thought I could make on a community was greater as an administrator than if I were singing a bunch of arias on a given night.

MP: Do you still compose? 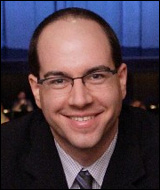 AN: Yes, I’ve been very fortunate in my composing career in that it’s truly secondary and yet it has been more active and successful than I ever dreamed it would be. My pieces, especially the ones for children’s choir, have been done many times in the Twin Cities and elsewhere by numerous professional ensembles and by school groups as well — in 36 countries in all.

MP: What do you think of as the highlight of your singing career?

AN: It was a balance of doing smaller roles with bigger companies and big roles with smaller companies. I liked having that balance. Even doing small roles, I always learned something from my colleagues, and I enjoyed being the big fish, too. I was a pretty standard lyric baritone. I loved doing Papageno (“The Magic Flute”), which I did numerous times, and I did the baritone roles in “Carmen.” I loved being onstage, but I didn’t care for packing my bags every month and moving on.

MP: The Metropolitan Opera’s HD-TV broadcasts to movie theaters have been a surprising success. They’re shown in several theaters in the Twin Cities. Is there a future in that medium for middle-size companies like Minnesota Opera?

AN: It’s still in its infancy, but it’s been a big hit, at least for the Met. In some communities, it’s actually been a detractor for the local companies. And I don’t think it’s providing new audiences for opera; instead, it’s providing more opera to the enthusiasts. Reports from Opera America are that the average age of this audience is even older than the audience for live opera. Even so, I embrace it because it demands a higher level of theatricality, because now you get the close-up. The acting has to be of movie quality or else people will get turned off. It really has changed the game for opera. But we don’t know yet whether companies like Minnesota Opera are going to do it.

MP: A lot of companies are reducing and canceling productions, whereas Minnesota Opera has actually expanded its offerings in recent years. I assume you’d like to continue in this direction.

AN: Absolutely. This is one of the reasons I took the job. The fact that Minnesota Opera has made this bold initiative into new works — risky but wildly innovative — is so important, and it’s being embraced by audiences and in the financial backing it’s received. The Twin Cities is such a theatrically advanced community. People want to see something new and innovative. This is why Minnesota Opera is getting so much respect around the country.

MP: It seems to me, finally, that Minnesota Opera now has something else that’s unique. It’s the only company where, should a baritone take ill at the last minute, the company president could leave his office, run backstage, put on his tights and sing the role to an amazed audience.

AN: That’s right. I’m a little out of shape, but if necessary … well, you never know.

In its new leader, Minnesota Opera has administrator, composer — and Papageno