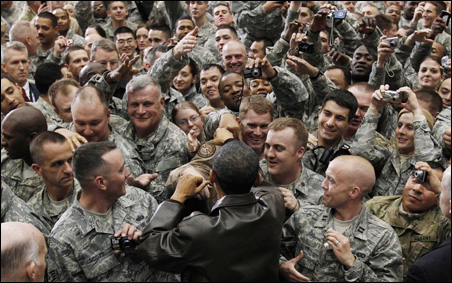 REUTERS/Jim Young
President Obama met with troops at Bagram Air Base in Afghanistan on Dec. 3.

Washington’s debate over repealing the ban on gays serving openly in the military pivots on a recent Pentagon survey. It showed that more than two-thirds of the troops would not object to gays and lesbians serving openly in uniform. But it also revealed key pockets of resistance — from Marines and soldiers in combat units and also from top generals in those forces.

University of Minnesota Professor Ronald Krebs has explored how and when the military’s participation policies shape minorities’ struggle for citizenship rights. He recently published the book “Fighting for Rights: Military Service and the Politics of Citizenship.”

MinnPost: Can some of the differences in the don’t-ask-don’t-tell debate be explained by a generational divide?

Ronald Krebs: It’s not exclusively a generational divide. I think part of it is generational and that’s why you see such a deep division between the views of the service chiefs and the average enlisted member.

RK: Correct….But the service chiefs are people at the end of their military careers who have spent their entire adult lives in the Armed Forces. Generally, we are talking about people who are in their 50s, which means that they came of age on issues of sexual orientation 40 years ago.

MP: How does age and experience help shape the attitudes of those older chiefs?

RK: It means that they entered the military sometime around the Vietnam War era, precisely a time when the U.S. soldier was not held in such high esteem. Those who chose to make the military their career at the time tended to be from the more conservative elements of society. And specifically they tended to oppose any of the countercultural trends that were common at the time. So these are folks, really, whose attitudes towards homosexuality were deeply shaped by those experiences.

MP: Can you contrast that with the relevant experience of the average enlisted member?

RK: The average enlisted member in the regular Army — as opposed to those in the reserves — is going to be relatively young. For them, even Ellen DeGeneres’ coming out is something that is before their time. This is certainly the “Will & Grace” generation [referring to a TV sitcom featuring gay characters]. Not only that, but for them the kinds of stereotypes of gays that were common even for someone like me — and I’m now 36 — when I was growing up, those kinds of stereotypes are not really their image of a gay member of society. So the concerns they have are just very different.

MP: How does this generational explanation square with findings in the recent Pentagon survey that 58 percent of the Marines in combat units thought repealing the law would have a negative impact on the abilities of their units to work together?

RK: That’s why I say it is not exclusively generational. We do see that in the surveys conducted among the Marines and certain combat units in the Army. They are not in the same place as the rest of the military.

MP: How do you explain that?

RK: Self selection. People who go into the Marines and go into the Army’s combat units…obviously have to be admitted. But these are people who self consciously want to be part of a more macho environment. And so, it’s not accidental that their views on gays in the military would look quite different from the rest of the Armed Forces.

MP: I spent two months embedded with Marines serving combat units in Iraq. These young people have to be among the most disciplined on earth, willing to risk anything in order to carry out a commanding officer’s order. Doesn’t this circle back? If the commanding officers were to say, “This is the way it’s going to be!” wouldn’t many of these highly disciplined Marines say, “OK. That’s the way it is!”?

RK: That’s absolutely right. And that is why having the commanding officers on board is crucial….As we saw with the racial integration of the Armed Forces half a century ago, there needs to be buy in up and down the chain of command. And unless the chain of command has bought in, you will not have effective implementation. After [President] Truman ordered racial integration of the Armed Forces, the forces as a whole fight tooth and nail…What changed matters with regard to racial integration wasn’t orders coming from the civilians…What changed matters was the pressure of the Korean War.

RK: When white soldiers in combat arms were killed on the Korean battle field there weren’t enough other whites in combat arms to replace them. Now at that time blacks could serve in segregated support units. So, white commanding officers…went where they had the manpower. That is, they took black support soldiers and dragged them into combat alongside whites and stuck them into foxholes with whites. It was a tremendous success, but it was only possible because of the combination of the elimination of racial quotas, which could be done by civilians directly, and then the pressures of the Korean War. We don’t have those pressures today.

MP: We certainly have a military that is under pressure today, given the lengths of the wars in Afghanistan and Iraq. We have soldiers and Marines rotated again and again into long tours of duty in combat zones. So if the military were to lose gay members, that would hurt. But maintaining the ban doesn’t necessarily lead to a loss of gay members as long as they keep quiet about their orientation. Correct?

RK: Exactly. That’s basically the status quo… .One thing we do know, though, is that for whatever reason a surprising number of the military’s language specialists who know Arabic and Pashto — which are key languages for the places where the U.S. forces are currently deployed — happen to be gay. These are very rare sets of skills. Anybody who has the physical and mental qualifications for the military and speaks these languages should be attractive to the military. To eliminate them summarily from service because they are openly gay would really seem to be harming the effectiveness of the Armed Forces.

MP: Generational concerns aside, isn’t this debate explained at least in part by politics, by certain politicians catering to the views of conservative voters?

RK: Absolutely. My answer to your question about the generational divide didn’t talk about the broader political spectrum.….Obviously, by the way, the officers in the military tend to be disproportionately politically conservative, disproportionately identifying with the Republican Party.

MP: What’s your best guess on the prospects? Are we going to see the ban rolled back and see gays and lesbians allowed to serve openly?