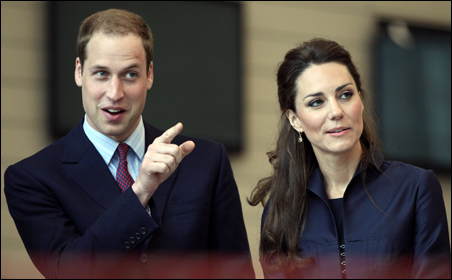 The American Revolution notwithstanding, fascination with British royalty abounds on this side of the Atlantic — especially this week with the upcoming wedding of Kate Middleton and Prince William.

Some three in 10 Americans have been wrapped up in pre-wedding news, according to a CBS News/New York Times poll.

And the American media is gaga over the festivities. U.S. media outlets have out-published the Brits on this story, says the Nielsen Company, which analyzed the buzz on social and traditional media in the United States, the United Kingdom and Australia. The United States had the highest share of news coverage by traditional news sources, such as the online versions of newspapers and magazines.

All of this in a country where school kids are taught that our founding achievement was knocking over the rule of the crown!

I asked University of Minnesota Professor John Watkins to help explain our hate-love relationship with the British monarchy. One of his specialties is the history of sovereignty and queenship.

MinnPost: Can this fascination be explained by a love of fairy tales?

John Watkins: That’s a huge part of it.

MP: Marriages often don’t last. In the case of the British royals we have the stunning example of Prince Charles and the late Diana, princess of Wales. We know all of that, but still we love the wedding story.

JW: And it starts very, very early. It is amazing how many progressive, feminist Minnesota women … end up with daughters who are going through the princess stage. All they want to wear is lace and pink. And their mothers are in shock…. It’s irresistible. It is built into the way that our society produces gender. Little girls are given the fantasy of what they can do to become a princess: You marry the prince. And if they don’t get it directly from their parents — even if, in fact, their parents are opposed to it — they will get it from the culture at large.

MP: At the same time, we celebrate the story of winning freedom from the rule of the crown.

MP: And we claim to reject the trappings of class and aristocracy.

JW: We love to define ourselves vis-à-vis the British as, “Well, the English have a rigid class system. We don’t!” We don’t? Drive to north Minneapolis. Then drive to Minnetonka. We do not have a titled aristocracy, a hereditary aristocracy. Fine. But we certainly have a class system, a class system which is inflected by race and insanely complicated in disturbing ways. And our class system is part and parcel of everything that happens in terms of our politics.

MP: Think of how politically damning it is in the United States to say that a candidate is elite.

JW: No kidding. And that paralyzes our political culture…. We don’t like elites because we don’t like aristocracy. It’s not American. And I think it creates a horrible problem for American political society.

MP: How about Sen. John Kerry, for example. As a presidential candidate, he went windsurfing. Who goes windsurfing? Americans are supposed to go hunting and camping.

JW: Exactly. Think of George W. Bush…. In one of the political debates, he said, “Well my English isn’t very good. Laura always tells me I need to watch my grammar.” You win points by looking déclassé.

MP: Has that always been the case?

JW: This has a long history in America. But think to the aura that surrounded the Kennedys… All of the royalist language came in to play: Camelot and the Kennedys as an aristocratic American family. Think again to what the family would have been two generations back… We take Irish immigration history, which is anything but high pedigree, and then we transform that into the ultimate aristocratic family.

MP: Yes, Kennedy was the descendant of a tavern owner and liquor importer.

JW: That’s it. And it allows us to have our cake and eat it too. It’s the American dream. They came. They worked hard. They did well. And then it becomes OK that his wife speaks French and Spanish.

MP: So that tells us how we can satisfy our princess yearnings while also holding true to an anti-aristocratic heritage. Even so, we seem to have reached a present-day demand for tipping the balance in favor of a level of crudeness in our leaders?

JW: Yes, for the overt grossness of a George W. Bush or a Bill Clinton. You know Clinton masterfully disguised his claims to pedigree — meaning his education and his brilliance — so that he could mask himself as a good old boy eating at McDonald’s.

And now, I think what’s happening to the British royal family is that, in their own way, they are going to have to start eating at McDonald’s. And they know that. Marrying Kate Middleton is a step in the direction of eating at McDonald’s — not to put her down in any way. But he is marrying a commoner. There haven’t been many of those.

MP: Back to the notion of royal wedding as fairy tale, what are the prominent weddings in British literature?

JW: All comedies have to end in a marriage. It’s part of the genre. One of the differences between the British novel and the French novel is that all English novels will be about marriage and the coming together of couples to form a marriage. All French novels, on some level, will be about adultery. Think of the contrast between a Madame Bovary and — say, Jane Austen.

For me the great marriage work in all of English literature is a ‘Midsummer Night’s Dream.’… It’s a perfect wedding story. It is a story about young love, but it also is a story about marriage in transition. It becomes a critique of the very arranged-marriage culture that aristocratic families depended on.

JW:  In England in the Elizabethan period on to much later, the only people who had the luxury to marry for love were the poor. If you didn’t have property to transmit, no one cared who you married or at least they didn’t care in the same way. What’s fun there is that Shakespeare’s plays represent aristocrats, they are produced under aristocratic and ultimately royal patronage, but it’s a hybrid existence. … People coming to see the plays are Londoners of the middling sort, apprentices, shopkeepers, the people that constituted an urban population.

MP: Does that explain the problems between Prince Charles and Princess Diana?

JW: That is one argument because there still is an arranged marriage culture for that level of aristocratic life. That’s of course one of the things that’s interesting about this moment. Given the position of the crown, given the embarrassments suffered at the hands of Queen Elizabeth’s children, everyone knows they need to give a better face to the English public.

That is what makes marriage to a commoner an incredibly savvy political act. The best thing William has going for him is the legacy of Mom — Mom, who of course, was no commoner, but someone who presented herself as a champion of the people and played that role very well but played it to the expense of the crown.

It’s a fascinating moment. This marriage had better work.

Is there a future for the Vikings in Minnesota?

What the buzz over upcoming royal wedding reveals about us