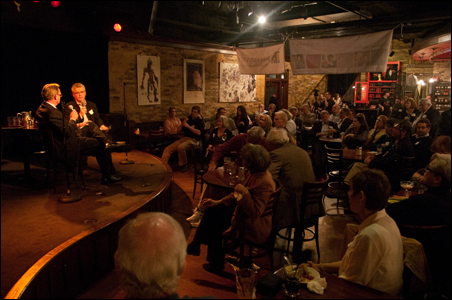 MinnPost photo by Kaeti Hinck
Ted Mondale predicted a Minneapolis deal is unlikely to happen before the end of the session.

Ted Mondale, the new head of the Metropolitan Sports Facilities Commission, made his case Monday for the regional value of a new Vikings stadium, saying that professional sports, particularly football, are crucial to the area’s job growth and in attracting and retaining employees.

He also argued that previous stadium investments have generated good financial returns for the state.

Appearing at a MinnPost Asks interview session attended by more than 100, Gov. Mark Dayton’s point man on the stadium — noting that the issue was changing by the hour — said he was told “not to make news tonight.” But Fox9 News, MPR and the Star Tribune all sent reporters, hoping for a good sound bite.

As for whether state money would be better spent on helping the poor and disabled, Mondale said: “There will never be enough to take care of those who are disadvantaged, if the economy is not growing.” And government investment is the key to economic growth, he said.

Mondale said he was neutral on the site for the stadium — whether it be Arden Hills, the Dome or the recently dropped Minneapolis Farmers Market location. Even so, he seemed to say that transportation costs and delays for an environmental impact statement could doom the Ramsey County project. If that happens and the Vikings go back to the drawing board, the Farmer’s Market site appears to make the most sense from a regional infrastructure standpoint, he indicated.

He thinks the stadium deal should get done soon: “We may not have the opportunity in the future.” But a Minneapolis deal is unlikely to happen before the end of the session, and unless the costs come down, neither is an Arden Hills deal, he said.

And in the course of a free-wheeling question-and-answer session, the son of Walter Mondale noted his career path as a former state legislator who served as the appointed head of the Metropolitan Council and was appointed by the governor to head stadium commission. He got a big laugh with this line:

“Mondales are not good at getting elected. We get appointed.”

When Mondale showed up for the forum, he was greeted by a small group of anti-stadium protesters on the sidewalk outside Hell’s Kitchen in downtown Minneapolis.

The protesters — carrying signs that said “Welcome Taxin’ Ted,” and “Stop Stadium Taxes” — said Mondale walked right by them, a cell phone to his ear. So they went on waving their signs and engaging passers-by.

Said protester Chris David of Minneapolis: “Regardless of where it is, funding a stadium is not the function of government, especially in this time of deficit.”

Later, in his talk with MinnPost’s Jay Weiner, Mondale mentioned seeing the protesters outside: “They called me an idiot.”