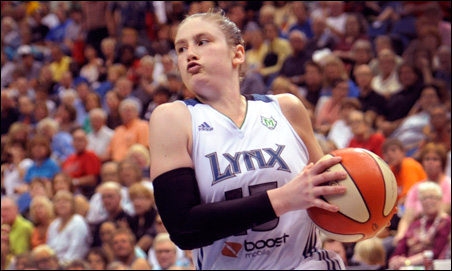 MinnPost photo by Craig Lassig
Whalen and the Lynx host the Atlanta Dream on Sunday to start the five-game championship series.

Local basketball legend Lindsay Whalen is once again leading her home team on a run at a championship: This time, it’s the WNBA finals.

Little girls (and boys) are again wearing her jersey, and the arena is filled with excitement.

Whalen hopes those marks could be surpassed at Target Center Sunday, when the Lynx host the Atlanta Dream to start the five-game championship series.

During the regular season, Whalen averaged 13.6 points, 3.5 rebounds and a league-best 5.9 assists in leading the Lynx to a 27-7 record, the best in the WNBA. The only Minnesota native on the team, Whalen is aware that the Lynx are winning while the rest of the local sports landscape is floundering.

In this edited transcript, Whalen talked with MinnPost about her career, the Lynx and “coming home.”

MinnPost: Does this take you back to 2004, when you were leading the Gophers to the Final Four?

Lindsay Whalen: It has that similar feel. There were fans waiting for us when we flew home [from Phoenix, where the Lynx won the Western conference championship], so there’s that sense of good accomplishment and excitement.

It’s a little different because we’re older than we were in college, and we’ve been professionals and adults for a bunch of years. We’ve been all over the world; we’ve played overseas. But the team chemistry is great, and it’s just been a fun year.

MP: That 2004 run filled Williams Arena with fans of a woman’s sport for the first time. Do you think the Lynx’s run is having a similar effect?

LW: Yeah, we’ve had great attendance in the playoffs, and even before, the atmosphere has been great at all the games. There’s definitely a lot more people than at last year’s games. We worked hard for [home court advantage] all year, so we just want to keep winning at home. We know how important that is.

MP: When you were growing up in Hutchinson, who were your heroes? Did you ever dream about playing professionally … in Minnesota? 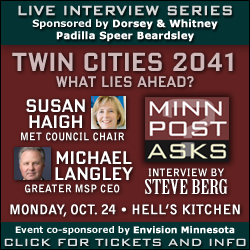 LW: The WNBA started when I was in ninth grade. We went to quite a few Lynx games, but I didn’t start thinking I could play college basketball in college until I was a junior or senior in high school, and I never really thought about playing a pro sport until college.

[Teammate] Maya Moore’s class is the first who started kindergarten with the WNBA [in existence]. So in fifth, sixth, seventh grades, she went to games. Younger girls now have the WNBA to look up to; it’s a realistic thing.

MP: You started your WNBA career in Connecticut — much to the dismay of many in the local sports scene. But did leaving Minnesota help you, in a way?

LW: Yeah, I think it was definitely good. I got to experience a different part of the country, and I grew up a lot, being away from home for the first time. There wasn’t the pressure there that there might have been here.

MP: Where are you playing this winter?

LW: In Prague. I’ve played there for five years. It gets to be a little much to be away that much and play all year long, but the team there has always been great to us.

MP: Do you get recognized on the street?

LW:Yeah, sometimes. But I can kind of blend in pretty good.

MP: The Lynx appear to be the lone bright spot for sports in Minnesota. Does the team think about that?

LW: People ask about it, but I’m the only one from around here. Other people aren’t as into it as me.

My favorite team is the Vikings, but I follow the Twins, and I was a big North Stars fan, and I love the Wild.

But we’re so focused on us [that] no one’s really talking about it. It just comes with success and how to handle it.

Sheila Mulrooney Eldred, a Twin Cities freelancer who writes about health, fitness, parenting and green issues, covered sports, including the WNBA, for the Star Tribune and other newspapers.

‘We worked hard all year, so we just want to keep winning at home’