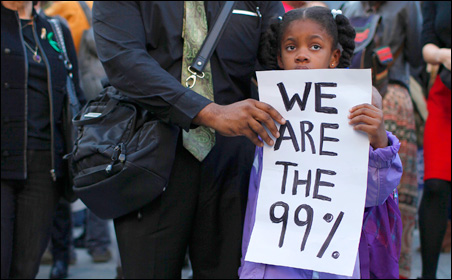 Early news stories about the two-week-old movement calling itself Occupy Wall Street had an undertone. “Aren’t these folks a throwback,” they seemed to wink as they described the sundry citizenry encamped in lower Manhattan.

The occupiers are angry with financial corruption and its effect on “the other 99 percent” and inspired by the Spanish Indignants and the Cairo protests that touched off the Egyptian Revolution.

Their demands? Well, they’re not there yet, being more interested in creating something democratic and inclusive. Indeed, with its ’60s-esque fixation on process and community rulemaking via consensus, New York’s Zuccotti Park could be Burning Man or a Rainbow Gathering.

But none of this takes into account the fact that the occupation has inspired a groundswell, and the groundswell has acquired any number of un-dreadlocked, powerful supporters, including organized labor. The snark, in short, is dwindling.

It has also inspired occupations in communities around the country. At 5 p.m. today, in Minneapolis’ Stevens Square Park, OccupyMN will hold a general assembly — a particular type of organizing meeting all of the occupations rely on.

Logistics will be discussed, and Friday at 9 a.m. the open space between Minneapolis City Hall and the Hennepin County Government Center will become the People’s Plaza. How long it will stay occupied is anyone’s guess.

Organizer LaDonna Redmond talked to MinnPost about the impending occupation. An edited version of that conversation follows.

MinnPost: There‘s been so little ink spilled here in the Twin Cities over the occupation. Tell us what you‘re after and what your strategies are.

LaDonna Redmond: Occupy Minnesota is in solidarity with Occupy Wall Street, which started in mid-September. Occupy Wall Street is basically saying that there should be people over profits. The message is very simple.

When you begin to unpack it, you begin to see how many different ways people feel that our political and economic systems have placed profits over people. So, what they call for basically is the elimination of policies, projects and programs that put people at the end of the line.

MP: You‘re trying to pick up on some energy from overseas. How was [Cairo] galvanizing?

LR: It was galvanizing in many different ways. One would be social media being able to broadcast to people around the world on how people are handling the frustration that they feel in their political systems. Like getting out and demonstrating, and being as peaceful as possible in some of those demonstrations.

There are many, many, many issues. People have made the criticism of our movement or our action that there just aren’t [specific] demands. I think that’s something that will evolve over the days and weeks to come.

But what we really want, one, is to get people to come out to stand in solidarity with us. That in their frustration, or in their looking for solutions, or their looking for community or like-minded people, they find Occupy Minnesota a place to come and begin that dialogue on how we need to take back control of our country.

MP: Tonight you‘re having a general assembly. Can you tell us what that is?

LR: The general assembly is the heart and soul, if you will, of Occupy Minnesota. It’s all the volunteers and all the people who are interested in moving the agenda forward around Occupy Minnesota. We’re working on everything that has to do with the logistics and infrastructure to make Occupy Minnesota a safe place, a place where that dialogue can happen.

It’s also where the trainings will begin around the process that the general assembly uses to make decisions and [reach] consensus. It’s a place to be heard if you don’t see what you want to see at Occupy Minnesota.

MP: And to follow up on that, what will happen Friday?

LR: The actual gathering. We’ll be in the public square and we’ll be organizing ourselves. There will be a welcome table for people to come in and get orientated to Occupy Minnesota, and then folks will begin to find their way around the public square. As a general assembly we will decide what the next steps are.

MP: The occupation on Wall Street is ongoing.  Do you expect that to be the case here?

LR: Yes we do. We expect to stand in solidarity with the folks on Wall Street and around the country. We don’t have end date in sight.

There are hundreds of people who are volunteering online and contacting us every day to find out how they can get involved. So we expect a pretty large crowd — and we’re having some awesome weather, too.

MP: You mentioned earlier that the movement as been subject to some criticism for what I will characterize as a lack of specificity in its goals. It seems you have tapped into a specific vein of frustration and also a very vivid kind of galvanizing political activity elsewhere. How do you turn those two poles of energy into specifics?

LR: I believe at some point we will ask for policy changes, but right now Occupy Minnesota hasn’t gotten that far. What’s so important about this process is that this is a people’s process. This is about inclusion. We’re not trying to go anywhere that the majority of people don’t want to go.

Getting all those voices together and putting them in a cohesive fashion is sort of like making gumbo, [and] really looking at why so many people feel so many different ways about so many different issues. Because of the pressure that our economic and political system has put upon us, different people have had just many, many different outcomes.

To try to horse trade between one set of concerns and another set of concerns is probably to do a disservice to someone. So we want to be sure we’re able to hear everybody very clearly.

We’re not at a loss to list out the issues or the solutions, but we have been at a loss for a mass movement that has galvanized people to take action.

MP: In other parts of the country, the recent occupations have gotten the support of organized labor. Is that the case here?

LR: We anticipate that we will get support of organized labor here. I don’t want to get out in front of them on that.

MP: Last weekend, your general assembly decided not to occupy the plaza in front of the Federal Reserve Bank, but to occupy the open space next to the Hennepin County Government Center. Can you talk a little bit about that decision?

LR: The main concern is that we want to make that all of the people who come down to join us are in as safe a place as possible. We want people to be able to stay as long as they can. It’s our understanding that the Federal Reserve is on private land, and we did not want to be on land that we would be immediately evicted from because we don’t have the right to be there.

We feel that the Government Plaza, or People’s Plaza, is a place of gathering for citizens of Minnesota and the United States, and that we have a right to be there. Our tax dollars pay for us to be there.

MP: I have read that your decisions are made by a crowd of people via consensus. How do you do consensus with a large mass of strangers?

LR: You take your time and you breathe very deeply. It’s a matter of having people’s voices heard. So even if we didn’t go where you thought we ought to go, you were heard and your proposal was heard and people debated it and spent time with it. Contrary to the way our political system has run lately, I think it may have even been refreshing for many people who participated in the process.

MP: And why is process important here?

LR: Voice is important. Voice is the key to democracy. Being able to have your say and not have your say necessarily outweigh someone else’s say because you have money or they have less money, or because they are African-American or Latino or they don’t speak English is very important. Being able to have your say no matter who you are, no matter where you come from, is at the core of democracy and that’s really what we want, a democratic society where we all have our say.

Occupy Wall Street inspires a groundswell (and OccupyMN) — at its core, ‘a need to be heard’