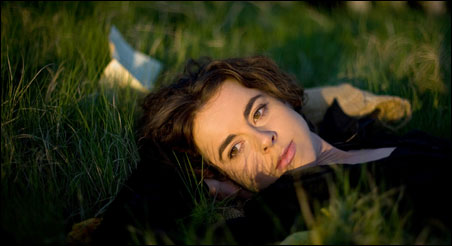 Particularly in the realm of feelings, there are some experiences that are really, really difficult to describe. Which is, of course, why a painting, poem or song can spark tears, elation or a sense of meaning. Momentarily, we’re connected to someone else living that same experience.

On Monday, students at South High School in Minneapolis who are part of something called the Silver Ribbon Campaign are expecting a visit from Boston songwriter Meg Hutchinson. The 9-year-old group, which has well over 100 members, is a student-led effort to support young people whose lives are affected by mental health issues, their own or those of someone they love.

A folk singer whose influences include Shawn Colvin and David Gray, Hutchinson has struggled with depression since she was a teenager, and was diagnosed with bipolar disorder five years ago. Her experience, and the emotional power of her music, has made her a sought-after speaker on mental health issues as well as a popular performer.

Much in the way a writer’s description of a work of art never truly does it justice, a description doesn’t tell you much about what it’s like to hear Hutchinson sing and talk about her inner landscape. Better you just show up at one of her upcoming Twin Cities appearances, all made in connection with the Mental Health Education Project’s (MHEP) annual conference this weekend, and allow her words to reach you.

Hutchinson’s visit to South High isn’t public and will be standing room only anyway, but anyone interested in her work has other opportunities. She’ll perform Saturday at 8 p.m. at the Cedar Cultural Center in Minneapolis.

On Sunday, Hutchinson will deliver the keynote address, “See Us Now Creating Harmony in Our Lives,” at MHEP’s 11th conference. The event is free, open to the public and takes place at 12:50 p.m. at Temple Israel, 2324 Emerson Ave. S., Minneapolis.

Hutchinson took time off from preparing for her trip to answer MinnPost’s questions about her interest in reaching out to students, who are at an age where many will first experience the onset of a mental illness. An edited version of that conversation follows.

MinnPost: We‘ve had some serious mental-health crises involving our young people in Minnesota in recent years, including the declaration of our largest school district as a suicide contagion area. Tell us about your interest in speaking to teenagers.

Meg Hutchinson: There’s no way I can rewind and go back to my 19-year-old self, when I first started wrestling with mental-health issues. I can’t go back to that girl and tell her, “It’s OK.” But I’ve now been given opportunities to talk to people, especially in that age group.

The late teens is usually the onset [of some mental illnesses] and I think it’s a particularly difficult time. Our sense of ourselves is still very undefined at that age, and there are a lot of pressures on us from family and from school and you know, being a teenager. It’s very hard to get your bearings and to know when you’re just going through a rite of passage and when something is more severe.

I was too proud and too private to ask for help when I needed it early on. I really, really hope to be able to tell young people especially that it’s OK. It’s not a failure and the sooner we can have that conversation in our lives, the more we can avoid it getting to a real breaking point.

MP:  As a songwriter you draw on something potentially very dark to create something beautiful.

MH: It’s interesting that songwriting began to play a really huge role in my life right around the same time that I was having my first depression. Songwriting became the only way I knew how to express and explore what I was experiencing and the only allowed way for me to say what I was wrestling with. The music was a way for me to express it to myself before I understood what I was going through.

It’s also a way to access people who aren’t yet consciously accepting what they’re up against. Especially with young people, the songs are an incredible channel into speaking with them about stuff that they’re not yet ready to turn to a professional about. There’s a way in which I can go in, in disguise and say, “Here are some songs.”

MP: You‘ve talked a little bit about isolation. Do you hear from people that they feel a little bit less isolated with their own struggles because of your work?

MH: The thing about music especially, even more than poetry, is it can strike people on such an emotional level that it passes through all the filters pretty quickly. We resonate with a song, we resonate with music – it’s a universal language of emotion.

People understand what a certain chord feels like to them. And people have definitely said that a certain song has started to kind of guide them through a moment in their lives. And other people have said, “I was in a position as a teacher where I couldn’t actually tell my own story to my students but I could hand them your CD and it could open a conversation with them that was really useful.”

When I hear that, I feel so rewarded. It’s one of my greatest aspirations that my songs are going to be useful in the world – not just entertainment, not just a way for me to understand the world, but also to somehow open the dialogue and be of some use.

One of the things that’s the most dangerous about mental illness is that we isolate and we feel a sense of being completely alone in that struggle, a sense that no one else could possibly feel the kind of anguish and pain and dullness of depression.

Somehow, even though we can read about it and we can see the list of symptoms it’s incredibly hard to believe that anyone else could be experiencing that same level of pain. One of our greatest tools in fighting suicide is to really let people know they’re not alone.

MP: The high-school students that you are going to speak to have been very resourceful in creating a support network for themselves and their peers. Their adviser told me they have more than 100 members. Unfortunately there are tens of thousands of students in other districts who I think have very, very few resources, and I wonder what your suggestion to them would be?

MH: It’d be really interesting to put more of these high schools in touch with the organization Active Minds. Active Minds is focused now on college campuses – and starting these peer-run chapters on campuses all over the country – because their belief is that students will turn to each other before they’re ready to turn to a psychiatrist or a professional because they’re really afraid of failing.

And then these Active Minds chapters can actually connect them with more resources. They’re the first step for a lot of college kids, and I think they’re creating a model that would be able to translate to a high-school environment.

But this idea that when it comes from the students themselves, there is incredible power in reaching each other that I think is not quite as effective when it’s coming from the adults and from the teachers and from the professionals.

The main thing is how do we cut through the silence around this? How do we reach people at that age? I just think it’s a pivotal age and to figure out how to get more of these peer-run organizations within the high-school environment and college setting.  People need to know they’re not alone, and they need to understand that if they can just get through that one moment when they think they can’t live with it, they’ll often be OK.

That’s what my song “Gatekeeper” is about. It’s about the Golden Gate Bridge and a man who patrols the bridge and keeps people from jumping. He does it by asking the questions, “How are you feeling?”  and, “What are your plans for tomorrow?”

He’s saved hundreds of lives and he says there’s a 95 percent chance that once you get those people through that one moment, they’re going to be fine. They’re going to get the help they need and probably never get back to such a low again. I feel like by talking about it we kind of cast this safety net with our words and our stories.

Healing is a life-long endeavor. I used to say, “I’m bipolar,” and now I say, “I’m living with it.” And it’s an awkward house guest but we have to get along, but I’m no longer afraid of it.

It’s not going to define my life. It’s just going to be an incentive to grow and to try to be useful in a way that I may not have been without that experience.