The debate over whether to amend Minnesota’s constitution to prohibit same-sex marriage is often framed as a battle between the deeply religious and gays and lesbians. Indeed, most Minnesotans who have begun to think about the issue are probably aware that Minnesotans for Marriage, the main organization campaigning for the ban, is made up of the top leaders of the state’s Roman Catholic Church and local and national religious right groups.

It may surprise many, then, to learn that one fourth of the members of the coalition working to defeat the ban, Minnesotans United for All Families, are faith-based organizations. Some have been in existence for a long time; some, like a growing group of dissident Catholics, are being galvanized by the issue.

A week ago, Grant Stevensen started a new job as the head of Minnesotans United’s brand-new faith department. A Lutheran pastor for 20 years, he currently serves Saint Matthew’s and the Spirit of Truth Faith Community in St. Paul. In addition, he has been active in the social justice organizing efforts, Isaiah: Building Just Communities.

Because it’s unusual to hear from religious leaders on both sides of an issue most of us likely think of first as political — and because one of our aims in coming months is to spend time with faith communities of differing stances — MinnPost wanted to learn more about Stevensen’s work.

An edited version of that conversation follows:

MinnPost: What drew you to this position?

And then in the fall, the Legislature decided to do a U-turn on the trend and put on the ballot an initiative to bring the [definition of ] marriage and who qualifies for it into the constitution of Minnesota. I’ve got to tell you, on so many levels I find that so objectionable and so offensive. That we would move that direction as Minnesota and that we would use something like the constitution of this state to do it.

MinnPost: Why a faith department?

GS: Marriage is both a public and private institution. Many of us get married in churches and synagogues. It’s where that happens. It’s an issue that cuts close to the life we live as people of faith. So Minnesotans United creating a faith department first of all is acknowledging that, and second wanting to be a facilitator for faith communities and provide tools and help faith communities who are engaging in this conversation about the marriage amendment.

MinnPost: Can you talk a little bit more about your role as a facilitator?

MinnPost: And churches are one of the main places where this is being discussed in Greater Minnesota.

GS: In Greater Minnesota communities, churches are one of the places where just about anything is discussed. I think it’s true that rural people have a very high level of faith-community affiliation and attendance.

MinnPost: Are any of the communities that you’re engaging with conflicted or divided?

One thing I would say is [this is] a conversation that’s been put on us that we didn’t choose. The Legislature last year chose to draw a line in the sand and say, ‘We’re going to vote in November that forever more gay marriage will not be a possibility in Minnesota.’ 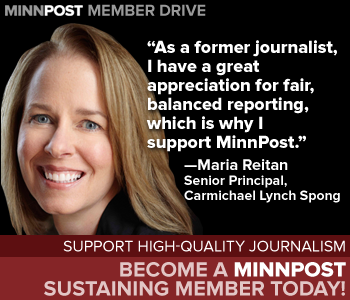 I think there are many people for whom that was a real wakeup call: One, why are we voting on this now? Two, why are we using the constitution to exclude whole groups of people? And three, we just need to get up to speed and have a conversation like we were talking about before. There’s lot of folks who are eager to have just sort of an opening conversation about this and I think the Legislature is forcing that.

There is a pervasive myth, and I think it is one of the things that we need to address over the next weeks and months. It’s a myth that hurts me pretty personally as a pastor. And that is that if you are a religious person, particularly if you’re a Christian religious person, that automatically means that you are anti-gay.

And that is the deepest baddest myth. It’s just not true of the religious community in this state. When the news went out that I took this position with Minnesotans United, I got nothing but phone calls and e-mails from friends of mine, all of whom are professionals in the church saying, “I am so happy that you’re taking this position.”