Jesse Saperstein is a 30-year-old New Yorker with a wicked sense of humor. He also has Asperger’s syndrome, a mild form of autism characterized by poor social skills, an inability to pick up on body language and resistance to change. In observance of Autism Awareness Month, Saperstein will speak at 7 p.m. today at the Mall of America’s Great Room on the fourth floor.

MinnPost: Children with all forms of autism have the best chance of positive results  if  therapy begins early. Why weren’t you diagnosed until age 14?

Jesse Saperstein: In the mid-1990s, it was not really a common diagnosis. The mildest kinds of autism were rarely diagnosed. In 1996 Asperger’s had only been on the books for two years.”

MP: Did the diagnosis help you to cope? Did you feel better knowing there was a name for what you had and that you were not alone?

JS: Absolutely. Before, all I knew was that I was different. I was affected by bullying, and I thought of myself  as a freak, a psychopath. Knowing it was Asperger’s started me on a path to finding answers.

MP: What do you think is the answer to bullying that affects so many teenagers today? 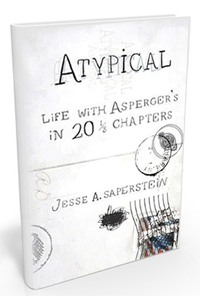 JS: One of my goals is to introduce the first anti-bullying component to school curricula in the country. I don’t mean just a unit in health classes, but a separate class, teaching lessons in compassion, allowing to live and let live. It would teach understanding of misunderstood disabilities. People usually fear what they don’t understand. Asperger’s is often seen as a character flaw.  [The class] would also address other groups vulnerable to bullying, such as gay teenagers. It would redefine myths on bullying and hopefully change attitudes on suicide. Being bullied has been viewed as character-building,  when in fact, due to bullying, some people can get to such a level of pain that there seems to be no other way out but suicide.

MP:  Other than writing your book and giving motivational speeches, have you held any other jobs?

JS:  (Chuckling) Oh, yes. I like to be that square peg that grinds itself  into a round hole. I wanted to take jobs that challenged my Asperger’s. I’ve worked at a group home for people with developmental disabilities, at a mortuary and as a substitute teacher. I was fired from every school that hired me. They were not understanding of my Asperger’s. At the mortuary, in talking with families at the worst time in their lives, I started to excel where I should have failed. People with Asperger’s are not known for saying the right things. But I learned about generalization. The approach that works with one family might not work with another.

MP: Most of us agree that men and women often do not understand each other; there have even been books written about the Mars and Venus effect. What happens when Asperger’s is added to the mix?

JS: It’s very hard. I think it’s one of those things that will get better with time. I find it hard to understand the hidden cues. If someone chose to ignore me to send a message, I would not get it. Usually, I explain that I have Asperger’s and I need to be told directly.

‘Life With Asperger’s’ author to speak at MOA