Sarah Agnew, currently starring in “Time Stands Still” at the Guthrie Theater, has been Nora in Rebecca Gilman’s “Dollhouse,” Nina in “The Seagull,” Natasha in “Three Sisters,” Ophelia in “Hamlet,” the title character in “Major Barbara,” and has performed numerous other juicy, demanding roles. (Naming her “Best Actress” in 2008, City Pages described her as “the very definition of ‘range.’ ”)

A regular at the Guthrie, she has appeared at the Jungle, Open Eye, and Children’s Theatre, and was a Jeune Lune company member from 1995-2001. She has acted in numerous theaters across the country.

Through May 20, you can see Agnew as Sarah Goodwin in “Time Stands Still.” Written by Pulitzer Prize-winner Donald Margulies, it’s a play about friendship, love, pain, healing, growing up, making choices, and moving on.

Goodwin and her partner, James (Bill McCallum), are journalists just back from covering the war in Iraq. He has had a breakdown; she was badly injured and nearly killed by a roadside bomb. Their close friend and editor Richard (Mark Benninghofen) is in a new relationship with a much younger woman, Mandy (Valeri Mudek). As the play unfolds, we reflect on our own lives, and we carry that with us when we leave the theater.

We spoke with Agnew by phone last week.

MinnPost: “Time Stands Still” is a quiet play, but powerful. When you first read the script, could you tell that it’s also very funny?

Sarah Agnew: Yes. I didn’t know how funny, but as early as the first scene, where Mandy arrives with her balloons [big mylar “Get Well!” balloons for Sarah] and then has that misunderstanding about “Brazil” [she confuses Terry Gilliam’s film with the country], people laugh. I knew there was a lot of comedy to be mined with these characters colliding. The two polar opposites of Sarah and Mandy — how beautifully constructed that is. Sarah and James are holier than thou, they truly believe in what they do, and then this very naïve character comes in and asks mundane questions they aren’t used to answering in their circles, and this opens up the whole dialogue.

Every scene is a conversation that starts in one place and ends up in a place you never imagine. How quickly it arrives at those places. Donald [Margulies] has created four very authentic characters.

MP: Did you know Margulies’ work when you took this part? Is there anyone you would compare him to?

SA: I had just seen “Shipwrecked” in Tucson. It’s wildly imaginative, theatrical, and very different. That’s the only other Margulies play I’ve seen. I might compare him to Chekhov. There’s something really Chekhovian about how on the surface the text reads as one thing, but there are so many layers underneath. The subtext is so rich.

MP: How would you describe Sarah Goodwin, your character in the play?

SA: I would use the words flinty, extremely intelligent, very brave, very vulnerable. I don’t know if I would say broken, but she’s scathed by doing the work she does. James has a very palpable prognosis of PTSD, and Sarah certainly suffers from degrees of it, as do many journalists.

MP: How did you prepare to portray someone who had been badly injured and nearly died? 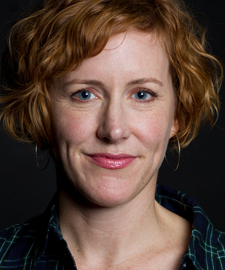 SA: She’s a victim of a roadside bomb. We decided that it affected her just on one side. We know from the text that she’s scarred from shrapnel and has a damaged leg. Once we made the choice to have an arm in a sling, and a leg brace, it helped that my sister had a radical knee surgery and a four-month recovery in incredible pain. It’s such a slow slog to get to where you can put the most miniscule amount of weight on your foot.

Most useful was a physical therapist from the veterans’ hospital I connected with. I met him and his partner for coffee — she also works at the hospital — and we had a two-hour conversation about his experience coming back from Iraq. He had seen this injury. He could tell me about precise exercises, how I would walk, how I would get up and down from a seated position, and what the impact of a fall would be. He knew the psychology of these people and how they approach rehabilitation. I learned what bravery is from the personal stories he shared with me. They really put things in perspective.

MP: What was the most difficult part of this role for you?

SA: I’m deepening as I continue to go along, but probably it’s her self-doubt. How her self-doubt is born, how a fissure opens up and gets exposed, how she pulls back and gets even stronger about her commitment. The fact that she calls herself a fraud — where the seeds of that began, why it’s allowed to come out when it does, her recovery from that. Tracking that psychologically was a challenge.

MP: All of the characters are decent people, but Mandy is the biggest surprise. What makes her character so effective?

SA: Because she’s guileless, she asks the most profound questions that are also the most simple. In the sophisticated circles James and Sarah and Richard roll in, people don’t even talk that way. She basically asks questions about Journalism 101. As the play progresses, she continues her argument, again in a very simple way. She therefore becomes the voice of the audience. The audience sees themselves through her. Donald says that Mandy is one of his favorite characters he’s ever created.

You have to give credit to Val [Mudek] for being a wonderful actor. Early in the process, we Skyped with Donald, and Val asked him about pitfalls he had seen in other productions that we could avoid. He said, “Make sure that Mandy doesn’t come across as a blonde bimbo, because she’s not.”

MP: The play unfolds slowly. All of the real action — the war, the bomb, the event that led to James’ breakdown — has already taken place offstage. There are no villains among the characters. Where does the tension lie for you?

SA: Without giving too much away, it’s the infidelity that occurred in a nine-year relationship. It’s also the act of Jamie leaving Sarah behind in Iraq. I imagine they’ve been in hugely dramatic situations together. The fact that he hit a cracking point and had to go home — I think she’s mad at him. There’s unfinished business between them. That, for me, is the dramatic tension.

MP: Has this play changed you in any way, or made you view your own life differently?

SA: It has changed how I look at news and images in the news. It has also led to a personal decision to support veterans and their families. I’m feeling very strongly about this. I would like to reach out and be supportive to the families. Having a loved one who returns from serving can be more difficult than the time away. I’m in the early stages of an awareness I didn’t have before. I feel more obliged to thank them and acknowledge them.

MP: What do you think Margulies is trying to say with his title “Time Stands Still”? Because it doesn’t — not even when Sarah, your character, is looking through the little rectangle on her camera.

SA: Margulies never spoke to us about the title, but I think it’s that moment for the artist when you arrive at a place where time is slower, and you’re seeing and hearing more acutely. That fantastic moment of feeling inside something. Time doesn’t stand still for me, but it’s so lovely when everything slows down and softens and you can really experience it. Everything outside that rectangle doesn’t exist.

MP: What’s next for you, after “Time Stands Still”?

SA: This summer, I’m slated to do this really wonderful project with Luverne Seifert and Darcey Engen. They have written an adaptation of “The Cherry Orchard” that will be performed in five rural towns in Minnesota in historic homes. It’s very interactive with the audience, and actors from each community we’re in will be in the show. That will happen this summer. Next fall, I’ll be at the Jungle in Sarah Ruhl’s “In the Next Room.” My next big show? I’m getting married May 26.

Sarah Agnew reflects on her role in ‘Time Stands Still’