The eyes of the world may suddenly be focused on Ukraine, but over the course of his 39 years, Minneapolis-born Ukranian-American Stefan Iwaskewycz’s eyes have never left his homeland.

Iwaskewycz is a member of Maidan Minnesota, the local support group for the victims of violence and pro-democracy efforts in Ukraine, which raised $35,000 over the weekend at a benefit concert featuring Peter Ostroushko, who delivered this eloquent and emotional testimonial on his Ukrainian heritage.

A web and graphic designer, photographer, and videographer by trade, Iwaskewycz was born in Minneapolis, has been active in the Ukrainian American community his entire life, and drums with the local Ukrainian folk and polka band The Ukrainian Village Band. He lived in Ukraine and in Latvia (his wife, Zinta Pone, is Latvian-American), and he comes correct when he says, “I have extensive first-hand experience with life in the post-Soviet world.”

“I have degrees in cultural studies and history from the University of Minnesota with a focus on Eastern European studies,” the father of three said Wednesday afternoon. “I lived in Ukraine during the Orange Revolution 10 years ago, wrote a blog about all things Ukrainian for several years, and have given talks and led discussions about Ukraine in a variety of settings.”

With Russian troops invading Ukraine and the region now seemingly on the brink of war, Iwaskewycz gave MinnPost a crash-course on the history of Ukraine, from Eastern Europe to Northeast Minneapolis, where such landmarks as Kramarczuk’s Sausage (founded in the late ’40s by Wasyl and Anna Kramarczuk when they emigrated from Ukraine) and Saint Constantine Ukrainian Catholic Church help keep Ukrainian traditions and hopes alive, even in times of turmoil.

MinnPost: What is the immigration story of Ukraine-Americans to the Twin Cities?

Stefan Iwaskewycz: There were three major waves of immigration of Ukrainians to the Twin Cities: After World War I, after World War II, and ongoing since 1991.

World War I was small, World War II was quite large, and then since 1991, I don’t think we know how many have come, and they’re still coming. Current census statistics have it at 14,000 Ukraine-Americans in the Twin Cities, but my hunch is a lot more because especially since 1991, many people have probably marked themselves as “Russian.” Because they have that in their heads – that Americans have no idea what Ukraine is. It’s been classic brain drain. In 1991, people just got their visas and got out. In 1991 [the] population was at 52 million, now it’s 42 or 44 million.

MP: Why has it been important to you to remain rooted to Ukraine and what’s going on there?

SI: My background, and my family’s background, is the typical immigration [experience]. Typically when people come to the United States they do so for economic reasons and they typically tend to integrate and don’t really care where they came from. Those who have left because of acts of war and left under compulsion tend to come to this country and try to hold on to their cultures and traditions as much as they can.

So the World War II immigrants from Ukraine were very much that type of people. They never would have left Ukraine were it not for war. They came here and created institutions where they could recreate as best they could their Ukrainian life. And that was my family, and my upbringing.

My grandfather was one of the founders of the Ukrainian-American community center, and he and his cohorts got heavily involved in the church, and funded it, and they spawned all the various organizations and youth groups that I and my friends were all raised in. When I lived in Ukraine, I met family members of all ages, and cousins. And beyond the Ukraine identity, I just grew up with people who were politically engaged. I’ve been a political activist in the past, for environmental and ecological issues, and I have a social conscience about it. 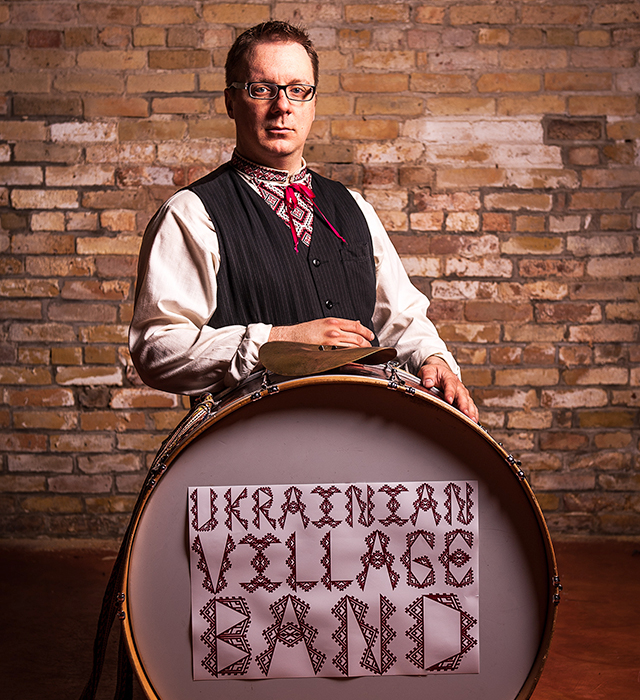 MP: What do you want people to know about what’s going on in Ukraine that might not be getting through?

SI: The first thing I want people to know is that there is a very active and effective misinformation campaign being run by the Kremlin. They have PR firms, including American PR firms, including one run by [former Minnesota congressman] Vin Weber, working for the government. Weber’s firm used to work for [Viktor] Yanukovych, the now no-longer Ukraine president who’s responsible for having shot 100 people and wounded about 3,000, right?

In Russia, they’re not called PR people, they’re called “political technologists.” They have paid staffs of people who comment on Facebook, on social media. Our own Facebook page has been spammed by the Kremlin. We don’t have any proof verifying that it’s the Kremlin, but it’s pretty clear when something shows up from a page that’s only been created two weeks ago and all it has is anti-Ukrainian material.

So what I would like people to know is that what’s been happening in the Ukraine is not a right wing-dominated coup that is endangering the livelihoods and rights of ethnic Russian and Russian-speakers in Ukraine. First and foremost. That’s the justification the Putin government is using for its intervention. There is a lot of pro-Russia sentiment in Ukraine, no doubt, just as much as there is a lot of secessionist sentiment in Texas.

The people I know from Ukraine will say, “Well, yes, we feel this fraternal thing, this good feeling, with Russia, but by no means do we want to be subsumed by Russia in any way.” Part of it is because Ukraine has a much more vibrant and alive and independent civil society. There is a much more independent media in Ukraine, even though they’ve been severely attacked and repressed over the years.

The music of Ukraine is as diverse as its people, when it comes to folk music. It changes across the country. The pop industry is vey active and fantastic, exactly the same range of styles as anywhere else in the world – rock, punk, metal, pop, house, dance, techno, electronica, hip hop and folk versions and all that. Ukrainian artists are quite popular in neighboring countries, especially Poland and Russia.

There is the problem of some artists performing in Ukrainian and switch to Russian as they become more popular – or if they stand to become popular in Russia, because Russia is a bigger market and so more money. But many also refuse to make the switch and stay in Ukrainian, even when promised greater profits by switching to Russian.

There are a number of contemporary Ukrainian authors that are well-known in Europe, especially Germany – Yuri Andrukhovych and Oksana Zabushko are two contemporary, hip writers. There is a great tradition of parody and satire in Ukrainian letters. There is an active film industry that occasionally produces interesting films, but is underfunded and really needs state support.

Ukranians are, as they always say about Eastern Europeans everywhere, extremely generous and hospitable towards visitors. They don’t have a lot – Ukraine is very poor – but in most places they do have plenty to eat, and they will bring out the entire kitchen when you visit, and will take the shirt off their back, so to speak, to help a visitor in need.

The beauty of Ukraine for me is the way in which it has not fully modernized, not like the U.S. It preserves certain things that we have lost in our hyper-modern world. Things do take their time much more so in Ukraine than here; people spend far more time with days off and visiting friends and family, and people actually sit at the table and spend lots of time visiting together.

Everyone sings. Even very many of the most modern of Ukrainians have been raised with folk songs in the background. Imagine for example if all Americans were raised in the context of a giant Nashville and everyone knew both the modern versions and the traditional versions of countless classics of American folk music. Imagine being at a bar in downtown Minneapolis that’s been playing loud house music or some Eurotechno and all of a sudden, a bunch of people in the room start singing this one folk song, and somehow most of the people in the room are singing it, too. There’s something about collective identity and slowness that we’ve lost here completely – or that we never quite had.

MP: What is your sense about the Ukraine-Crimea situation at the moment, and about what will happen, and does what Putin’s doing have you feeling far away or helpless, because of the protests and all?

SI: That’s a very good question. I think this is really new territory. I’m loath to… I really don’t know what’s going to happen. I have no idea what to expect from the Putin government. I don’t feel helpless, really, because of what I’ve been able to do here. I would feel it if I were not engaged with the support efforts I’m doing here. More people are getting interested in what we’re doing. We’re talking about our next move. We’re going to continue to be active. And I would like far more strident measures taken: assets frozen of top Russian officials, maybe sanctions against the Russian government for what they’re doing. Strange for a peacenik like me to even suggest that, but …

His song speaks to Ukrainian history and the diaspora