It’s easy to dismiss Thornton Wilder’s Pulitzer Prize-winning play “Our Town” as simple, sentimental and bland. Set in the fictional small town of Grover’s Corners, N.H., at the start of the 20th century, it has a minimal set and no scenery. The story is uncomplicated – the three acts are titled Daily Life, Love and Marriage, and Death – and the language plain-spoken, if by now a bit old-fashioned (the play was first performed in 1938). No wonder that on any given weekend during the school year, it’s being performed at a thousand high schools.

Peter Rothstein, founding director of Theater Latté Da, once sneered at this American chestnut. He wrote his final college paper on Wilder’s “Our Town” and “The Skin of Our Teeth,” skewering both. The same day he turned in his paper, he went to a performance of “Our Town” at a theater in Spring Green, Wis., and wept. He remembers that night as “one of the most thrilling and moving experiences I have ever had in the theater.”

Fresh from the success of his recent “Cabaret” at the Pantages, Rothstein brings his re-imagined “Our Town” to the Lab Theater starting Saturday for what he calls “my apology to Thornton Wilder 20 years later, to honor his great play with humility and an open heart.” He has assembled a diverse cast of actor musicians, added live music, made the marvelous Wendy Lehr the stage manager (the play’s narrator, sometime character and omniscient MC), and stripped down the set even further than Wilder did, which was radical for his time. We spoke with Rothstein last week.

MinnPost: Why “Our Town,” and why now?

Peter Rothstein: It’s the 75th anniversary of the play, so that was the first thing that made me say, “Maybe now is the time to do it. And maybe there’s a way to infuse it with music.” Latté Da doesn’t always do musicals, but music has to be instrumental to the storytelling.

It is America’s most popular play, our most produced play. There’s a production of “Our Town” happening somewhere around the planet every day of the year. I thought – if our town today created “Our Town,” what would that look like? How could I make this play reflect Minneapolis to the best of my ability? What if I took this play and paired it with American popular song? That would be a way to diversify the voices. By adding music, I can now have African-American writers, Jewish-American writers, immigrant writers. We now have Scott Joplin and Irving Berlin and Stephen Foster and Charles Ives. And we have Latino actors and African-American actors and Asian-American actors. We have actors with disabilities.

PR: Very homogeneous. But right away, at the beginning of the play, [Wilder] puts the idea of diversity on the table. He tells us that the Methodists are over there, the Baptists are down by the river, and across the tracks are the Polish families and other foreigners, Canucks, who came to work in the mills. Even though we wouldn’t define that as diversity today, certainly in 1901 that would have been how we talked about diversity. I wanted the town to look like our town today.

We’re not doing New England accents, and we’re not doing period clothing. We’re doing contemporary dress with period accessories. So our little newspaper boy will put on the period newsboy cap, or the mother may don a tiered apron. I want the audience to see the then and the now at the same time. The actors are in contemporary dress, but they’re each donning one character signature piece.

MP: What about the set?

PR: We’re doing chairs and no tables, no trellis. I actually started out by saying I wasn’t going to do ladders. What happened with “Our Town” was the stripped-down set became its own kind of vocabulary, its own twee aesthetic. Our furniture is silver metal Windsor chairs. The ladders are 14-foot wooden ladders that have been brushed with a metallic pewter paint. The pieces themselves are period, but with a very contemporary finish. Again, this notion of the then and the now.

The other thing we’re doing is there’s a permanent bank of seats in the Lab Theatre, and we’ve built a parallel bank of seats opposite that. I’m staging the play stadium-style, like a football field, where the audience is on two sides. So the backdrop of the play for everyone seeing it is people in our town today. The actors enter and exit from the audience. They become part of the audience when they’re not part of the action.

MP: What else is new about this staging?

PR: There are 18 actors, and most are playing instruments. For me, in the design process, I’m always saying that when you put something in you have to take something away. Theater thrives in negative space. I’m adding music, but I’m taking away costumes. There’s very little scenery, but there’s banjo and guitar, mandolin and upright bass, flutes and pennywhistle, harmonica and chimes and piano, and an old pump organ. Tons of instruments. 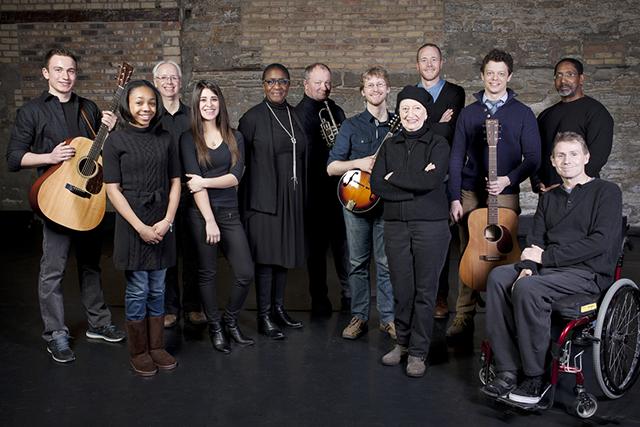 I’ve been thinking a lot lately about theater being this communal experience. It clearly is one, but in some ways it’s becoming less of one because people are rushing into the theater with their cellphone on down to the last possible second, and intermission comes up and the cellphone is back on, and the play ends and you beeline out of there to be the first one out of the parking ramp. For a play that is about community, I thought – how do I wake up that communal experience?

About 15 minutes before the show, actors meander on stage and begin performing songs. We’ve done our own arrangements with a more contemporary sensibility – the then and the now. And we actually roll right through the intermissions. After each act, the lights slowly come up and the action keeps rolling with music. We’ve picked a lot of music that has a great sense of joy, and this community making music together has a palpable energy.

MP: What do you think “Our Town” is about?

PR: I think it’s about how we live our lives, and how we’ll look back upon the life we’ve led. Do human beings ever really realize how wonderful the world is while they’re here? Ultimately, I think that’s what the play is about: how to live in the moment and embrace the power and the wonder and the beauty of your life for the relatively small fraction of time you get to live here.

[In Act III, the character] Emily says to her mother, “Can we just take a moment and look at each other – really look at each other in this moment? We’re all here. We’re all together. Can we just look at each other?” I think that message has become all the more important and vital in contemporary society. There’s so much that’s wonderful about the information age, and we have so many more tools to connect with one another, but I’m not sure it puts us more in the moment.

MP: Take us behind the scenes. Tell us about something that happened in rehearsals or during the planning – something especially memorable.

PR: We have an early Irving Berlin tune called “Play a Simple Melody.” Wendy and I had spent a day rehearsing on our own while the rest of the cast was off playing with music. They were running this number, and Wendy and I were sitting and watching, and it’s so silly in so many ways, and totally delightful – xylophone and accordion and piano and an amazing fiddle player. As the number keeps building, they keep adding more and more instruments, and then pretty soon five of them come out with bottles filled with water, including Isabell Monk, and they’re all making music out of blowing into bottles. Izzy has had this amazing career, and she’s there playing a bottle.

The number finishes, and I look over at Wendy, and tears are streaming down her cheeks, and she says, “It is so beautiful to see this collection of people making music together, so much joy and sense of play, and that’s what it’s all about.” She was so moved by something that seemed so silly, such a bauble. And that was pretty great.

Peter Rothstein Q&A: On his new ‘then and now’ staging of ‘Our Town’