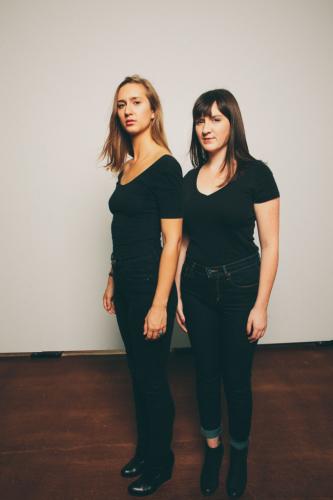 In March of 2013, Joanna Demkiewicz and Kaylen Ralph were sitting in a classroom at the University of Missouri School of Journalism in Columbia, listening to a panel discussion, when they got a strong sense of déjà vu. The panel was for a new book being published called “Next Wave,” which featured “America’s New Generation of Great Literary Journalists.” There were 19 stories in all, but only three were by women. On stage in front of them were five writers, all men. Finally someone asked, “Why are there only three women in your anthology?” The publisher, Mike Sager said they had their criteria — the writers had to be born between certain dates, and that it had proved really hard to find women who fit for the collection.

Demkiewicz and Ralph both thought back to the previous year, when not a single woman was nominated for a National Magazine Award in writing. They immediately started texting each other and later that day launched The Riveter online, which they imagined as a female version of Esquire: A magazine full of smart, compelling stories by women that appealed to all readers. The first print issue came out last summer. The second — bigger and better yet — was just released.

We talked to Demkiewicz about why she didn’t move to New York City, the state of women in journalism and about her high hopes for The Riveter.

MinnPost: Why did you move The Riveter to Minneapolis?

Joanna Demkiewicz: It was 2013 and we were graduating in May. While all of our friends and fellow students were figuring out what jobs they wanted out of college, we were creating this, and thinking where we could move it that would make sense? Everyone thought we would go to New York City, but Minneapolis has a great, underrated literary community, and there are a lot of startups here— a lot of people thinking they can just make something happen. So we wanted to come here for that reason. Nothing against New York, but we wanted to be in a new place.

JD: It’s not a walk in the park. That’s for sure. Kaylen and I each have day jobs and do this on the side. But we have grown significantly. We’ve hired a staff. We can’t pay them yet, but we got a response of over 100 applicants who loved what we were doing and wanted to be on the team. So we have seven people and we’re still searching for certain team members who will work well with us.

MP: How did The Riveter get its start?

JD: We both grew up thinking the same thing — that we wanted to be writers. And we both studied magazine journalism, and it was required at the University of Missouri that you work for the newspaper and that you work for a city magazine. So our assignments were literally crunching out stories on deadline.

But we were doing a lot of reading, too, and we noticed that a lot of what we were reading, in terms of great examples of great writing that we should aspire to, was mostly by men, which was totally fine. But then in 2012, we were sitting in our editing class when the ASME [American Society of Magazine Editors] awards were announced. And not a single female writer was nominated in any major writing category. For us that was super disheartening, especially when we looked around our classroom, and 70% of us were women. We just wondered, “What happens to us after we graduate? Where do we go?” Afterward, she and I went to a little bar and drafted our first idea. Then we spent a little time away from that idea. She went to Ireland. I went to Rwanda. And when we came back we kind of forgot about it. But in 2013, after the “Next Wave” panel, I think we all felt a little let down, simply because we wanted to know that women’s stories were universal, and that we don’t just rely on men’s storytelling to tell us everything we need to know about the world around us. Just more representation is a simple way to put it. At the panel Kaylen and I literally texted each other and we each had the same feeling like, “How could this happen? Where are we going after we graduate? These women, my colleagues doing this awesome work, what are they going to do?” 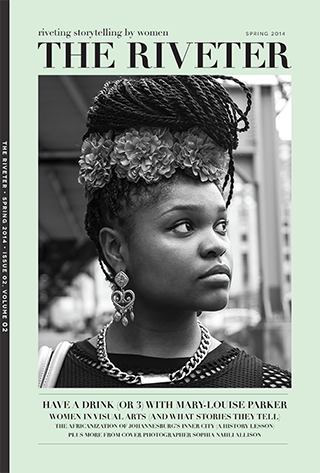 Issue 2, Volume 2 of The Riveter

MP: You think those stories were there, but they just weren’t picking them.

JD: Yeah, I think they were there, but they’re not as widely recognized. But another question is: Are women’s magazines like Glamour and Elle producing good, quality work? And that was another part of our argument for starting The Riveter. We do argue, that yes, often they are, but the stories aren’t as often recognized as award-worthy. We’ve got Esquire, which is a men’s magazine. And they are constantly winning awards for best feature writing. Where’s the equivalent women’s magazine? Our whole idea with this was that we wanted to create a space to publish women — and this is where it get’s a little tricky — but that’s not a women’s magazine. In the beginning, when we had our first drink and our first concept of what this would mean, we thought, let’s create the female version of Esquire, where we could have great writing but also the lifestyle elements as well, and not make it so nichey, where people feel like they’re not involved or not welcome. But the problem as a whole — shown by the fact that women haven’t won as many awards or been as recognized — was that we came to the conclusion that women’s voices aren’t as universal.

JD: Yeah, going all the way back to the “Women’s Page,” or in some bookstores, there are some shelves that say “Business” and then “Women’s Business.” Women mostly are writing about motherhood, sex, beauty, home, family, which are all really important things. But [as a society] we corner them and say, these are women’s issues and women’s voices. The idea of having ‘universality’ in voices is that we should trust women’s storytelling — no matter what the subject — on par with men’s. I have a craving for more balance.

MP: And you want The Riveter to help correct that?

MP: Do you guys have any business model for how you might pay for long form nonfiction, which can cost tens of thousands of dollars?

JD: We have a business plan and a financial plan for the future. But we’re at capacity right now, still using our crowd-funding money and our sales money to pay our long-form writers as much as we can. And we’re very apologetic, because it does take tens of thousands of dollars to create really great content, and we can’t match that right now. We’re not afraid to say we need help in that area.  But we have a model and a plan ready.

MP: And you’re waiting for investors.

JD: Yes. We considered going the nonprofit way, but we’re not considering that any more.

MP: Any interest, or offers?

JD: No! [Laughs.] But we haven’t approached anyone yet.

MP: Some of the research into entrepreneurship — where there’s also a gender gap — suggests that women score lower on risk tolerance and competitiveness than men. Do you think that’s part of why there are less women out there writing long-form nonfiction?

JD: There was an interesting article in the Atlantic not long ago that was an excerpt from “The Confidence Code,” by Katty Kay and Claire Shipman. They went back to research on young boys and girls participating in sports and how participating in sports teaches you how to handle a loss. That was the main thing. And their argument was that young girls are brought up to be perfectionist A-students, whereas boys are being rowdy and pulled out into the hallway. According to them, since we’ve grown up that way, we’re conditioned so that we can’t handle rejection or loss or when we’re not right, so maybe we don’t even try.

JD: I think that’s a really difficult question to answer, but I do think it’s social and structural. Right now Kaylen and I are working as researchers with Mike Sager on three anthologies of longform by women that are coming out. Part of the research is interviewing each woman that’s featured so we’ll have transcriptions of the interview in the final book, to give a little break between stories. I’ve interviewed five or six of them so far, and I’ve asked them, what do you think happens to these majority of women who are female students. A couple I spoke to did have families. One would literally take her kids with her when she was reporting. Or she would have to miss dropping her kid off for his first date because there was a bank robbery, and she just decided that’s a choice she’d made. Another woman I spoke to said, “I didn’t have kids, because I wouldn’t have been able to go to Antarctica and travel to other places if I made that choice.” I don’t know if it’s that simple. One woman said she thinks that women self-select into careers that are a little easier — whatever that means to you — or more stable. So I think we do choose that life.

MP: What’s your best hope for The Riveter?

JD: My first hope is that it’s understood. The whole idea that it’s writing by women but that it’s not a women’s magazine is pretty radical for some people. My second hope is we don’t come across as highbrow, or that only certain people can read it. We want it to be all-inclusive, in that people who maybe don’t think they’re interested in “longform”, realize that it’s just a story. We want this magazine to sit on your bed stand a little bit longer than usually my Esquire or Marie Claire does. We’re kind of hoping people sit with this for a while longer.

Order print or digital copies of The Riveter at therivetermagazine.com/shop/.

The Riveter: Women, words and the future of magazines