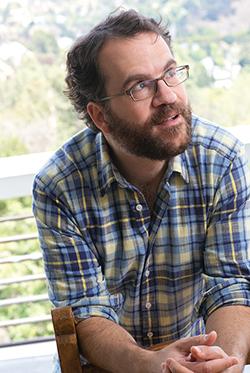 For five years, writer Tom Bissell worked on a novel about the Apostle John, before he resigned himself to the fact that his “half historical, half contemporary” account was not going to work.

He set it aside, but one fact stuck in his mind: John’s tomb was located in Turkey and was supposedly empty — the only remains of the Twelve Apostles unaccounted for. Later while he was serving in the Peace Corps in Uzbekistan he heard rumors that Matthew’s remains were in nearby Kyrgyzstan. Where were the others?

From this question grew the idea for a travel book on the Apostolic tombs, and for the next few years Bissell traveled through Jerusalem, Greece, Italy, Turkey, France, Spain India, Turkey and Kyrgyzstan as a sort of doubting pilgrim who wanted to “explore the legendary encrustation upon twelve lives about which little else is known and even less can be historically verified.”

A decade later, after Bissell plowed through some 200 books and racked up 1,800 pages of notes, “Apostle: Travels Among the Tombs of the Twelve” is being published by Pantheon. Bissell writes for Harper’s and The New Yorker, and his last book, “The Disaster Artist,” is being made into a film by James Franco to be released later this year.

On Wednesday, March 23, there will be a discussion with Bissell at 6 p.m. at the Uptown Church, for which registration is requested, followed by a 7 p.m. reading at Magers & Quinn Booksellers.

MinnPost asked Bissell about separating truth from fact, about the idea of Jesus, and about seeing the Apostles as a kind of fan fiction.

MinnPost: You’ve been working on this book for a long time. What was most time-consuming part? The travel? The research? The writing?

Tom Bissell: The writing. Definitely the writing. What didn’t help was that I kept writing other books in the middle of writing this one. There were three occasions in the last nine years were I didn’t even look at Apostle for over a year. That meant, basically, having to re-research so much of it when I finally got back to work on it, because the material wasn’t fresh in my mind anymore. There are certain books I probably read three times while researching this book, to revivify my hold on the material. The travel was the easiest — and best — part of the process. The research wasn’t terrible either, since I really enjoy reading about Christianity. So yeah. The writing. The writing was really hard. The final thing to note was that for seven of the nine years I worked on it, I had zero understanding of what I was trying to say. I was amassing pages, but they didn’t have a thesis or a focus. When I finally figured out my book was about storytelling, I was able to cut whole swaths of it away. The first draft was more than twice as long as the published book. I cut a book from the book.

MP: Was there a relationship between your own loss of faith and the desire to find out who these men really were?

TB: Not really. Once I came to accept, in my own mind, that the literal historical truth of Christianity is irrecoverable and unknowable, I abandoned any hope of finding out who the apostles really were. They are names used by Christians to various ends, and embedded in stories with multiple agendas. We can’t know who they were. All we can do is think about is how they were used. Which isn’t to say I’m implying some ancient Christian conspiracy here. A lot of early Christian storytellers used the Apostles as a kind of fan fiction — one of the first instances of fan fiction, as I say in the book, that we know of. People wanted to build on the enchanting stories of the Gospels and Acts, and the Apostles become the vessels of that continuation.

MP: I’m interested in your research for this book. Giving the difficulty of sorting fact and fiction and myth from the lives of the Twelve Apostles, where do you even begin to get objective historical accounts?

TB: There isn’t any objective historical account of virtually any of the events recorded in the New Testament, with the possible exception of Josephus, the first-century Jewish historian, but even there we have problems, because the earliest copy we have of Josephus’ work dates from the 11th century and was likely altered and changed by medieval Christian scribes. There’s a handful of secular references to Jesus, but nothing about the Twelve. All you can do is read the primary texts (the books of the New Testament) and their apocryphal outgrowths, along with the work scholars have done to explain the actual historical context lurking behind these works, much of which is educated guesswork. You’re looking, essentially, at a bunch of stories, most of them written anonymously. So I can only look at the stories of the New Testament as a kind of fiction, not in the sense that it’s all made up, but rather that it’s been ordered and arranged to have a certain kind of effect on the reader. And that, for me, is enough.

MP: You mention that in Paul, Jesus is an idea, while in the Gospels Jesus is a character. Can you explain that a little?

TB: Paul talks about Jesus a lot, and obviously knew a bit about some of the traditions the Gospel writers later elaborated on: That he was betrayed, that he was crucified, that he was resurrected, etc. But Paul wasn’t a storyteller, so you don’t get any tactile details from Jesus’ ministry or any of the wonderful language and aphorisms the later Gospel writers portray Jesus as saying. Paul’s Jesus was this thing that dropped down upon us and changed everything. He was a force, not a character Paul had any interest in depicting. Jesus is a force in the Gospels, too, but the Gospel writers also work very hard to arrange his acts and sayings and miracles into a compelling matrix of narrative. For instance, Paul’s Jesus never begs God to take this cup from him. Paul’s Jesus never has a wry exchange with the Samaritan woman by the well. Those are characterological narrative moments — they define who Jesus is. Paul defines Jesus by what Paul believed Jesus was, not what he did. 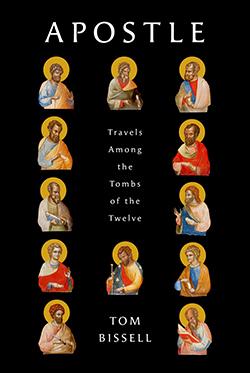 MP: Now that you’ve completed this project, do you have any different feeling about the men buried beneath the stories?

TB: Disappointingly, no, I don’t. But the other day I saw a book on early Christianity that seemed interesting and I bought it instantly. When I finished my book about Central Asia, I didn’t keep reading books about the subject. When I finished my book on the Vietnamese War, I didn’t keep reading books on the subject. But I’m still interested in early Christianity. Maybe even more so.

MP: Have your thoughts changed on the usefulness of trying to sort historical fact from fiction?

TB: I’m not a historian, so my feelings on this issue are more writerly and intuitive than not. In short, you really can’t separate the two, not when you’re discussing events that happened thousands of years ago. As I’ve said many times before, the mere act of creating a narrative out of real events is to fictionalize those events — and that goes for the authors of the Gospels, me when I’m writing my travel books, and presidents when they write their memoirs. Now, there is soft fictionalization and hard fictionalization — obviously, there are gradations here — but the goal, for me, becomes trying to divorce the little-T truth of an account from its big-T Truth. All you can really hope to figure out — about ancient work especially — is roughly why something was written.

MP: What do you think the enduring appeal of the Apostles says about our need for them?

TB: Do we need the Apostles? For more than a thousand years the Catholic Church fought hard to prove its descent from Peter. So many Christians literally killed one another over the issue of apostolic descent — who had it, and who didn’t. No one fights over these issues today, and even many believing Catholic scholars accept the historical weakness of the belief that Peter founded the Roman church. So who are the Apostles for most Christians? As I learned while working on this book, for most Christians they’re apparitions: half-forgotten and half-real.

MP: If you could start a new church dedicated to one of the Apostles, who would it be and why?

TB: The day I am contemplating dedicating a church to someone who lived thousands of years ago is the day, I hope, when my family and friends call the guys with the butterfly nets to take me away.

MP: OK, but do you have a favorite Apostle, or a favorite apostolic story?

TB: My favorite Apostle is probably John, followed closely and narcissistically by Thomas. As for apostolic stories, my favorite canonical one would have to be the story of Doubting Thomas, which really is beautiful and complicated, with a moral whose genuine ambiguity I try to elucidate in the book. My favorite noncanonical apostolic story would have to be the one that involves Bartholomew lecturing a priest who didn’t do enough, Bartholomew says, to prevent Saracens from destroying his tomb. When the priest asks how will he ever find Bartholomew’s bones amid the wreckage, Bartholomew tells the priest to search at night, and the bones “that shine like fire” will be his. In fact, for the longest time, that was the working title of the book: Bones That Shine Like Fire.

Wandering the desert: Author Tom Bissell on separating fact from fiction in the lives of the Apostles