WASHINGTON — This is the end result of Tim Pawlenty’s income tax plan, as visualized by the Center on Budget and Policy Priorities. 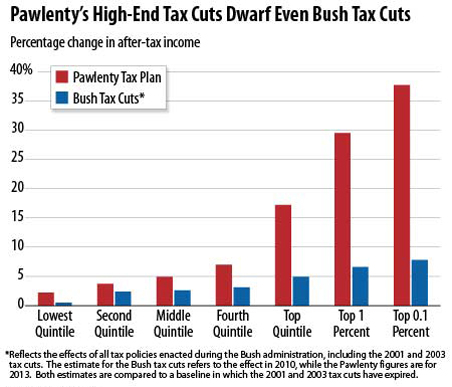 The center describes itself as “a nonprofit, nonpartisan policy organization working at the federal and state levels on fiscal policy and public programs that affect low- and moderate-income families and individuals.”

Pawlenty’s plan creates two income tax rates: the first $50,000 of an individual’s income (or the first $100,000 for married couples) is taxed at 10 percent, and everything above that is taxed at 25 percent. Each section of the tax bracket would end up keeping more of its paycheck than they would under an extension of the Bush-era tax cuts, but that effect is especially multiplied on the top end.

According to the Center: “Specifically, in 2013 the Pawlenty plan would give people in the top one-tenth of 1 percent on the income scale (i.e., people with incomes above $2.7 million) an average annual tax cut of $1.8 million — which is more than four times what they got last year from the Bush tax cuts.”

Pawlenty’s campaign did not immediately return requests for comment.