It didn’t take long for Bluewater Productions to find their next comic book character: Michele Bachmann.

She and fellow GOP presidential candidate Mitt Romney, as well as the Tea Party, will be getting the comic book treatment later this year, the company announced. 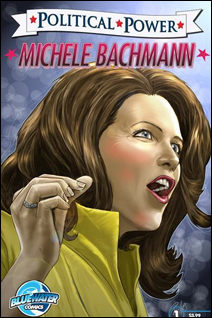 And they say Texas Gov. Rick Perry likely will be next, in January.

It is no secret that the United States’ 2012 Presidential Campaign is under way and already Minn. Rep. Michele Bachmann, former Mass. Governor Mitt Romney and, of course, the Tea Party Movement are making headlines. Bluewater Comics is returning to their political roots with bio comics on each of them as part of their “Political Power” line.

“Our goal with these comics is not to pick a side, but to spark the interest of our readers and let them study both the lives of Rep. Bachmann and Gov. Romney closer. And when you consider historical significance of what the Tea Party has brought to the table, you find it is not just a nod to the American Revolution, but it has forced a conversation in modern politics.”