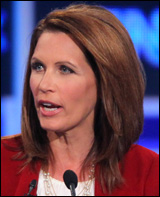 WASHINGTON — Monday was a big day for press releases.

The failure of the congressional “supercommittee” to hatch a plan reducing future federal deficits by $1.2 trillion led to a response from nearly everyone with a stake in national politics, including Minnesota congresswoman and presidential candidate Michele Bachmann.

MinnPost asked Bachmann’s congressional office for a statement and received one. Monday evening, the presidential campaign released one of its own — and the differences between the two reflect the ways in which Bachmann’s tone changes depending on her role as either congresswoman or presidential candidate.

The statement from Rep. Bachmann was understated and placed the blame at the feet of the committee members and, more generally, the very idea of a “supercommittee.”

“I firmly believe that the solutions to our fiscal mess will not be solved in secret by 12 members of Congress. I opposed the creation of the super committee from the beginning. Though I will continue to support eliminating wasteful government spending of any kind, I am concerned about automatic cuts to defense.”

“Mr. President, your super committee has failed the American people. You were elected president to lead, not to ignore the problems of our country and our economy. While millions of Americans are out of work and government spending and debt are spiraling out of control, the president and the super committee could not reach an agreement on how to put our country back on a path to prosperity. The committee itself is a metaphor for the overall lack of political courage that has led us to this place of crisis. Meanwhile, our nation is swiftly approaching the precipice of economic collapse and the president’s leadership was nowhere to be found.

“The super committee could not meet their statutory charge of reducing Congress’s planned increase in spending by a relatively paltry $1.2 trillion over 10 years and now have placed this country’s national security at risk through the consequences of triggering severe cuts to military funding, which Defense Secretary Leon Panetta recently warned will be ‘devastating for the Department,’ and ‘these changes would break the faith with those who maintain our military and seriously damage readiness.’

“The people we serve want the president and Congress to announce a bold bipartisan deal to cut spending and do so without raising new taxes on American families or businesses. Cutting spending will necessitate hard choices, but throughout American history we have united behind a common purpose when the best interests of our children and nation were at stake. It’s time to lead.”

Campaign staff and congressional offices are barred from coordinating their communications, so the two statements show just how differently political press teams craft their responses depending on which hat their boss is wearing at the time.

Both statements accurately reflect Bachmann’s opinions on the matter, but the presidential campaign is all but required, by virtue of what it is, to hit Obama hard, whenever it can. The congressional office was more diplomatic and, while other lawmakers got political with their statements, it wasn’t much different than what Bachmann’s congressional colleagues presented.

It’s not just communication staffs either: Bachmann herself has sought to differentiate between candidate and congresswoman depending on the circumstances. Since July, Bachmann has twice held Capitol Hill press conferences and flatly refused to answer questions about her presidential campaign — she was there, she said, as a congresswoman representing Minnesota’s 6th Congressional District and meant to keep the focus exclusively on her congressional duties.

In Congress, Bachmann wielded as much influence over the supercommittee as any other rank-and-file member of the House of Representatives — that is to say, none at all. Her statement’s tone reflects that.

On the campaign trail, though, Bachmann has to fashion herself as a strong leader who can replace Obama in the Oval Office. Understated and diplomatic might work well for a third-term back-bencher from suburban Minneapolis, but for someone looking to go to the White House, critical and overtly political is the way to go.

For Bachmann and the supercommittee, a tale of two statements