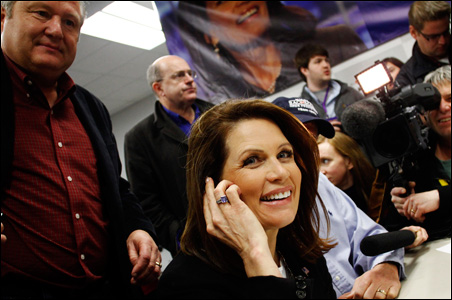 REUTERS/Joshua Lott
Bachmann making a campaign call from her headquarters in Urbandale.

DES MOINES, Iowa — The week after Christmas was supposed to be the most triumphant time of Michele Bachmann’s Republican presidential campaign — she planned to finish her 99-county tour of Iowa and ride a wave of positive publicity and goodwill to a solid finish in Tuesday’s Iowa caucuses.

Instead, the week was dogged with staff defections and poor polling results and an overall negative trajectory heading into Tuesday’s must-win contest.

On Wednesday, Bachmann’s Iowa chairman, state Sen. Kent Sorenson, left the campaign to endorse Ron Paul. Sorenson was one of Bachmann’s first Iowa backers and a high-profile member of her leadership team, often moderating conference calls between Bachmann and her supporters.

Bachmann accused the Paul campaign of paying Sorenson off, which elicited a rebuttal, distributed by the Paul campaign, from her Iowa political director, Wes Enos. By Thursday, he was off the campaign. The staff turnover caused a news cycle vacuum, completely eclipsing the final day of her whirlwind Iowa tour.

Saturday brought more bad news: Bachmann came in sixth among the seven GOP presidential candidates in the last Des Moines Register poll before the caucuses. Only 7 percent of likely caucus-goers say Bachmann is their first choice, and the guts of the poll don’t look much better for her:

• She’s viewed as the least knowledgeable in the race (26 percent say so);

• She’s tied with Newt Gingrich as the least able to bring about real change (21 percent);

• And outside of Ron Paul (29 percent), she’s viewed as the least electable in the general election (28 percent say so).

In the background of all of this is Rick Santorum, the former Pennsylvania senator who is the only other candidate to traverse the entire state this cycle. Santorum is the latest (and in Iowa, it appears the last) Republican to see a surge in support as conservative voters look to find an alternative to the more moderate Mitt Romney. Santorum’s surge has hurt many of the other candidates, but perhaps none more than Bachmann.

He and Bachmann have pursued the same voters — the evangelical Christian conservative base that is so pivotal to the Iowa electorate — and he received the endorsement of this state’s prominent social leader Bob Vander Plaats. At the time, Vander Plaats reportedly asked Bachmann or Santorum to back out and support the other candidate to consolidate support, a call that was repeated last week by a pair of conservative religious leaders here. 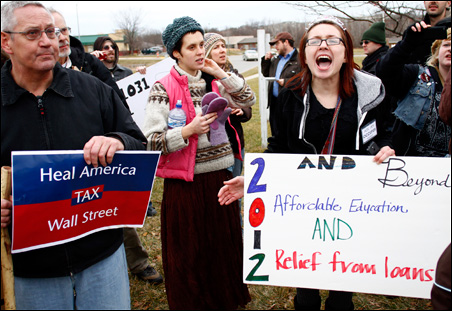 Polling suggests that message may have gotten through to voters. Santorum’s supporters like Bachmann — among those who plan on caucusing for Santorum on Tuesday, Bachmann is the second choice of nearly half of them, per a poll of Iowans released Sunday night. As Santorum rises, he’s leeching votes away from Bachmann at a very high rate.

Bachmann has remained positive throughout, predicting an acceptable finish in the caucuses this week and vowing to head to South Carolina afterwards.

“What we’ve been doing is exactly what we needed to do,” she said on the CBS Early Show on Monday morning. “We have literally seen thousands of people flip on the ground.”

She said her campaign has “bought our tickets to South Carolina,” which holds its primary on Jan. 21, and she plans on going there no matter the results Tuesday. Twice last fall, Bachmann’s campaign said its path to victory depended on a victory in Iowa to boost its standing in that state.

Bachmann’s diminishing support has lead pundits to write her off in the Iowa campaign’s final days. The Iowa Republican predicts a sixth-place finish. The Washington Post’s Chris Cillizza gives her 50-1 odds of winning the caucuses. The New York Times’ FiveThirtyEight blog predicts she’ll receive only about 9 percent of the vote here on Tuesday, and gives her a 0 percent chance of winning.

Combine it all — an embarrassing staff defection, the ho-humming of the 99-county tour and polling that suggests eroding support as social conservatives coalesce around someone else — and you have a very bad final week for presidential candidate Michele Bachmann.