Arts & Culture
MNopedia
This content is shared with MinnPost by MNopedia, the digital encyclopedia created by the Minnesota Historical Society and supported by the Legacy Amendment’s Arts and Cultural Heritage Fund.
Oct. 16, 2012

In the 1890s, after bicycles became more comfortable and affordable, bicycling swept the nation, Minnesota included. Minnesotans who embraced bicycling at this time helped lay the groundwork for a number of lasting changes in American society, from shorter skirts to better roads.

Early versions of what we now call the bicycle were invented and used in Europe from the seventeenth century. However, the modern bicycle, first known as the “safety,” was not created until the 1880s. The safety bicycle got its name because it was safer to ride than its immediate predecessor, a high-wheeled bicycle called the “ordinary.” Ordinary bicycles were usually very heavy, since they were made of wood with solid rubber wheels. Their design, with one large front wheel and one small back one, caused them to be fairly unstable, and they sent many riders flying forward over the handlebars at even the slightest bump or hole in the road.

By contrast, the safety bicycle had two wheels of equal size, and it tended to be more stable and easier to brake. Its frame also was much lighter, as it was made of hollow steel tubing. Its wheels were lighter, too; they had pneumatic tires—hollow rubber tires with an inflated tube inside. These tires made for a much more comfortable ride, protecting the rider from the rough roads common at the time.

The new design of the bicycle made it increasingly popular. So did a drop in price. In the 1880s, the selling price of ordinary bicycles averaged $100 to $150, about six months’ pay at the time. Safety bicycles started at a similar price, but their price dropped through the 1890s, until bicycle sellers in Minneapolis in 1898 could advertise basic models for sale at thirty dollars.

The popularity of bicycles led to changes in society. Men and women were more mobile because of bicycles; they could get out into the countryside or travel from one town to another more easily. Bicycles also provided exercise, and both casual riding and bicycle racing became common. Communities across the state, such as Moorhead and Fergus Falls, built tracks for bicyclists to race on, and the races were well attended during the mid-1890s.

Safety bicycles provided particular freedom to women. Before bicycles, women could go few places without a chaperone, but with bicycles, they could get around on their own, under their own power. In addition, bicycle clothing, with its more functional and relaxed design, caused a dress revolution for women, many of whom could leave their long skirts at home for the first time.

As their numbers grew, bicyclists became a political force. In Minnesota and elsewhere, one of their primary concerns was improving roads. Most roads in the state were dirt tracks, with ruts worn in them by horses and carts. City roads often were no better than rural ones. Bicyclists could only ride in the ruts, which caused conflicts with others using the road. Up on the sidewalks, bicyclists got in the way of pedestrians. 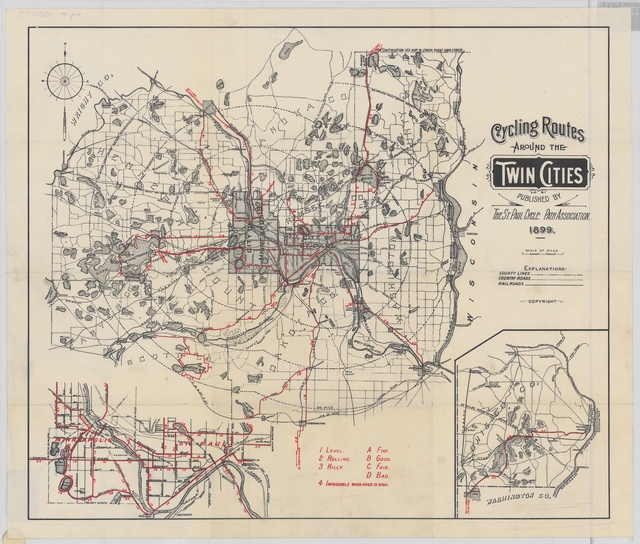 Courtesy of the Minnesota Historical SocietyA map showing cycling routes in the Twin Cities area, circa 1899. Click the map to explore a larger version.

So bicyclists began campaigning for better roads for everyone and dedicated bicycle paths. They hoped these would lessen conflicts and enable more enjoyable riding. Bicyclists also made some of the first road maps, to guide riders along the best routes. The good roads movement and further development of road maps both were taken up by automobile enthusiasts in the twentieth century, but they started with bicyclists in the nineteenth century.

The automobile ended the mass popularity of the bicycle in Minnesota and the rest of the country. Cars became publicly available in the 1890s, first appealing to a niche market, as early bicycles had, and then to the general public after 1900, with further refinements and drops in purchase price. Bicycles remained popular but in lesser numbers and without the same impact as they had during the 1890s.