Arts & Culture
MNopedia
This content is shared with MinnPost by MNopedia, the digital encyclopedia created by the Minnesota Historical Society and supported by the Legacy Amendment’s Arts and Cultural Heritage Fund.
Jan. 22, 2013 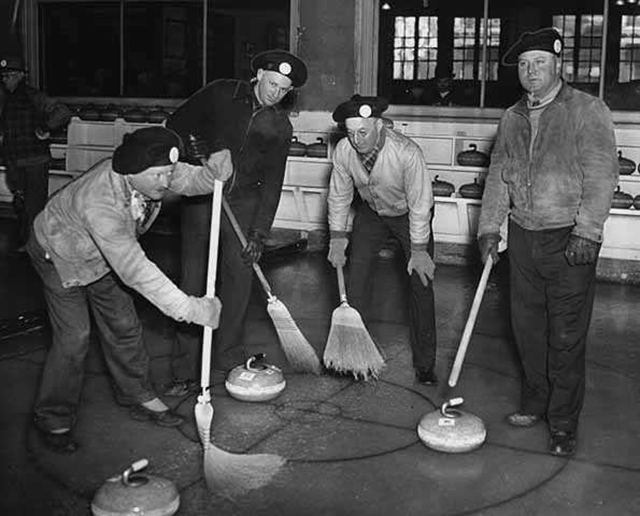 Courtesy of the Minnesota Historical Society
A curling team at the St. Paul Curling Club, c.1935.

At its centennial in 2012, the St. Paul Curling Club was the largest curling club in the United States, with over 1200 members. Club members have competed in national and international competitions, including the Olympics. Despite ebb and flow in its popularity over the years, the club has long been a place to play and promote the sport of curling in the Twin Cities.

Curling is a winter sport imported to North America from Scotland. In it, two teams of four slide eight forty-two pound stones down a sheet of ice toward a target painted below the ice’s surface. They score points by getting their stone closest the center mark. Each team attempts to place their stones near the mark while keeping their opponents stones away from it. By placing spin on the stone, the player allows the stone to “curl” or turn as it slides down the ice, which gives the sport its name. Players use brooms to sweep in front of their sliding stone to keep it moving straight or sliding longer. Whichever team has the most points at the end of a match wins.

The first curling match in Minnesota occurred during the 1850s when Scottish immigrants in Mapleton improvised a game with wooden blocks. At some point in the years after this initial match, the sport came to St. Paul. In 1885, the first incarnation of the St. Paul Curling Club (SPCC) was founded. This club was one of many sporting clubs in the region, and another St. Paul group, the Nushka Curling Club was also formed that same year. Initially playing on the frozen Mississippi, the SPCC built a clubhouse on Raspberry Island in 1891. Two years later, the club hosted the first Northwestern Curling Association Tournament. Courtesy of the Minnesota Historical Society
Curling on the Mississippi River, c. 1891.

Unfortunately, the original St. Paul Curling Club could not keep building on these successes. It folded in 1904 due to a declining membership and a clubhouse badly in need of repairs. The next year, former members of the SPCC formed the Capital City Curling Club. In 1912, again due to declining numbers, the Nushka and Capital City clubs combined to form a new St. Paul Curling Club. At this time, they also constructed a new facility on Selby Avenue to replace Nushka’s aging clubhouse further down the street. In the decades after the merger, the club hosted national and international tournaments and newspapers regularly carried news of the results of bonspiels and other competitions.

As popular as the sport was in the early twentieth century, it was still dependent on the Minnesota winter. Before the advent of ice making equipment, curlers relied on the weather to form the ice on the playing surface. Unfortunately, the weather did not always cooperate, and the winters from 1930 to 1932 were unseasonably warm. Because of this unpredictability, the club decided to invest in artificial ice making equipment in 1932. Over the next six years, members raised the necessary funds, and the club installed the first two sheets of artificial ice in 1939. They added four more in 1944, but the club did not transition completely to artificial ice until 1962.

In the later decades of the twentieth century the St. Paul Curling Club continued to field teams in international competitions. However, the movement of members to the suburbs and a national decline in the sport nearly marked the end of the organization. By the late-1970s, membership numbers were falling, the neighborhood around the clubhouse was declining, and the clubhouse was badly in need of renovation. Club members debated moving the club to the suburbs, but they ultimately decided to keep it where it was. They donated time and money to rebuilding parts of the clubhouse. They also improved the ice making machines. Their work paid off, and in 1988, the club hosted the United States Curling Association Championships for the first time. Since then, the club has hosted many large tournaments, and SPCC members have represented the United States in the Winter Olympics and other international competitions.

Over 100 years of winter fun with the St. Paul Curling Club