Arts & Culture
MNopedia
This content is shared with MinnPost by MNopedia, the digital encyclopedia created by the Minnesota Historical Society and supported by the Legacy Amendment’s Arts and Cultural Heritage Fund.
March 18, 2014

From 1898 to the early 1930s, St. Paul was the center of a national home furnishings industry based on wire grass, a plant that grew wild in the peat bogs of Minnesota and Wisconsin.

For centuries, the wild marsh plant called wire grass (carex stricta) had no practical use. It has none today. But between 1895 and 1930 it made up the raw material for an industry—based in St. Paul—that gave work to thousands of people.

It all began in Oshkosh, Wisconsin and it started with twine. Wire grass grew abundantly near the city and Midwest farmers had an endless need for binder twine. Some businessmen and mechanics in Oshkosh figured out that wire grass could be spun into a passable twine. In 1898 Northwestern Grass Twine Company moved to St. Paul, bought a farm implement company, and took over two factories. The next year the name was changed to the American Grass Twine Company (AGT).

It soon turned out, though, that wire grass made bad twine, and by 1903 AGT had given up on it. By then the company’s managers had learned that it made much better rugs and wicker. 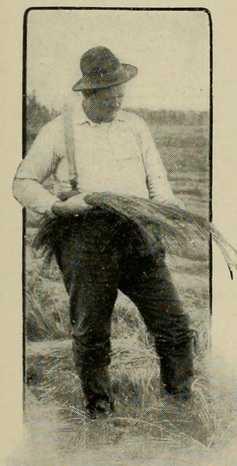 The company set up a network of harvest camps in the marshes of Minnesota and Wisconsin. These operated from late summer, when the peat bogs began to dry, into the late fall. The workers, a mix of transients and locals, labored seven days a week, ten hours a day. They had four main jobs. Those who cut the grass used horse-drawn mowers; when the marshes were soft the horses wore “bog shoes,” a wide wooden boot tied to their hooves, to keep them from sinking. Next came the men who turned the grass in the fields for drying, called “rubberbacks” for their stoop labor. The tyers, many of them women, used a special knot to gather the dried grass into sheaves. Finally the balers tossed the sheaves into a portable frame that compressed the sheaves and tied them into enormous bales. The bales then traveled by rail to the Como Avenue factory to be spun it into bundles and skeins.

Some was shipped to New York to be turned into wicker furniture—everything from baby carriages to umbrella stands to picture frames and desks (eventually four hundred items in all). These took their places in houses, offices, and hotels around the country.

St. Paul workers wove the rest of the processed wire grass into rugs. Rugs proved to be American Grass Twine’s most successful product. They were light, had a pleasant, natural smell, and could be painted in any color and pattern. Department stores everywhere sold them, and AGT made money. By 1903 it employed almost nine hundred workers in St. Paul (more than any other manufacturing business in the city) and hundreds more in the harvest camps. 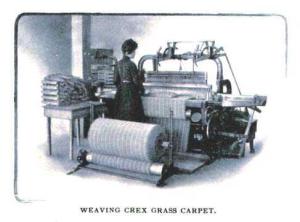 Then AGT stumbled. The officers and directors falsified the value of the company and looted its cash by paying themselves enormous dividends. A shareholder lawsuit exposed the fraud. In 1905, the disgraced officers agreed to resign pay back $640,000 (by a conservative estimate, $13 million in 2014). Under more honest leadership the company forged ahead.

In 1908 AGT became Crex Carpet Company and was listed on the New York Stock Exchange. Soon it phased out wicker and concentrated on rugs, all made in St. Paul. Between 1907 and 1925 the company averaged over $140,000 in profits yearly (about $3 million in 2014) with a peak of $447,000 in 1920. The factory employed about three hundred people, many of them operating mechanized looms. Most of these workers were women.

Crex’s success did not last much longer. Grass rugs from Japan, inferior in quality but much cheaper, hit the market. The company’s losses began in 1926 and reached $396,000 in 1929; then came the Depression.

The last wire grass harvest took place in 1931; the factory closed soon after. When Crex Carpet Company filed for bankruptcy in 1935, it had $24.90 in the bank. The factory building stood well into the 1970s. Crossroads Elementary School was built on the site in 1999.

Weaving a fortune out of Minnesota marsh grass