Arts & Culture
MNopedia
This content is shared with MinnPost by MNopedia, the digital encyclopedia created by the Minnesota Historical Society and supported by the Legacy Amendment's Arts and Cultural Heritage Fund.
April 30, 2014 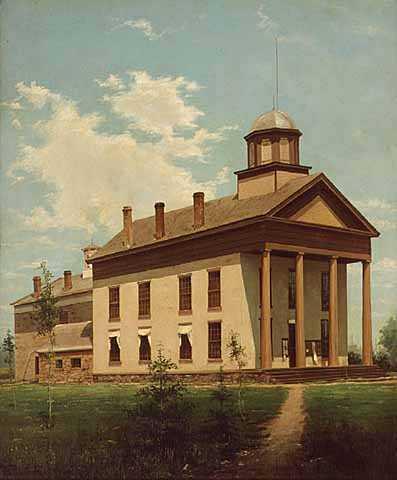 Courtesy of the Minnesota Historical Society
Oil on canvas painting (1888) by Alexis Jean Fournier of the Ramsey
County courthouse in St. Paul as it appeared at the time of Ann Bilansky’s
trial in 1859.

Ann Bilansky was the only woman executed by the action of Minnesota courts. She died in 1860, but doubts about her guilt remain alive.

From soon after statehood in 1858 until 1906, Minnesota law authorized the death penalty for murder. In that time twenty-seven convicts were hanged by order of state courts. The most controversial execution remains that of Ann Bilansky, the only woman ever hanged in Minnesota.

Stanislaus Bilansky, a Pole, arrived in St. Paul from Wisconsin in 1842 at age thirty-five. He worked as a tailor, then a storekeeper-barkeeper on what became East Seventh Street. He was a melancholy man, angry, a drinker, and often ill. His second wife, Ellen, abandoned him and their four children in 1856.

Mary Ann Evards Wright (known as Ann), a widow originally from North Carolina, moved to St. Paul in April 1858 at the request of her nephew, John Walker. In September she married Stanislaus Bilansky and took over the care of the Bilansky children. John Walker took up residence in the two room shanty behind their home.

In late February 1859 Stanislaus Bilansky began showing symptoms of stomach illness, including fever and vomiting. He died on March 11.

A coroner’s jury, hastily assembled the next day, ruled the death natural. Bilansky was buried March 12. But that evening one of the witnesses at the inquest, Lucinda Kilpatrick, reported to police that she now remembered having been with Ann Bilansky on February 28. She recalled that on that date, Ann Bilansky bought ten cents’ worth of powdered arsenic and made some odd comments about her husband “drop[ping] away sudden.” On March 13 the coroner exhumed the body; medical examiners found a trace that resembled arsenic. Ann Bilansky was arrested later that day and on March 15 a new coroner’s jury ruled the death a homicide.

The trial began May 23 with Isaac Heard prosecuting and John Brisbin for the defense. The heart of Heard’s case was that Ann Bilansky had bought arsenic on February 28; twelve days later her husband died of arsenic poisoning. The proposed motive was a liaison, or desired liaison, with John Walker.

Brisbin put up a skilled and vigorous defense. The medical evidence was inexpert and ambiguous, and his own expert witness gave a contrary opinion. The evidence of any love affair was slender and speculative. Ann Bilansky had sound reason for buying arsenic: rats infested the house and store. But a jury may choose which witnesses to believe. It convicted Ann Bilansky on June 3.

The case went to the state supreme court, though on narrow and technical grounds. The court denied the defense’s appeal on July 23. Within hours of learning her appeal had been denied, Ann Bilansky escaped from jail by squeezing through window bars. Authorities caught her a week later just a few miles away.

On March 5 the legislature passed a bill commuting Bilansky’s sentence to life in prison. Governor Ramsey, whose brother Justus had served on the jury, vetoed the bill.

Willis Gorman now turned to clemency. The state constitution gave the governor sole and unlimited power to pardon Bilansky or commute her sentence to any length of imprisonment he wished. Pardon petitions came from citizens deploring the death penalty. Gorman submitted a strong argument for Bilansky’s innocence that lamented many irregularities in the trial.

Minnesota Supreme Court chief justice Charles Flandrau wrote that he opposed the execution of a woman. Ann Bilansky wrote Governor Ramsey a four-page letter asserting her innocence. The most powerful plea came from a surprising source, prosecutor Isaac Heard, who wrote of his “grave and serious doubts as to whether the defendant has had a fair trial.”

Their efforts were to no avail. On March 23, before about a hundred people at the corner of Fifth Street and Cedar Street, Ann Bilansky mounted a temporary platform and was executed. Before she died, she promised that she would find justice in heaven.

She is buried in an unmarked grave in Calvary Cemetery.

The controversial execution of Ann Bilansky