Arts & Culture
MNopedia
This content is shared with MinnPost by MNopedia, the digital encyclopedia created by the Minnesota Historical Society and supported by the Legacy Amendment’s Arts and Cultural Heritage Fund.
April 1, 2014 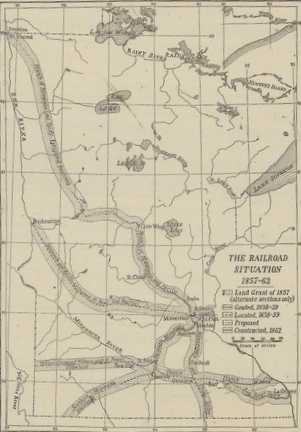 Courtesy of the Minnesota Historical Society
Map reproduced in William Watts Folwell’s History of
Minnesota, Vol. 2 showing railroad lines in Minnesota as
graded, located, proposed, and constructed between
1857 and 1862.

In 1854 legislators in St. Paul requested a grant from the federal government to create a rail line across Minnesota Territory. Public outcry led to scandal and the repeal of the territory’s first land grant bill.

Railroad land grants were a controversial measure used by the federal government to promote the building of rail lines in the West. First, companies were given land to build rail lines on. Then, after meeting predetermined conditions, they were allowed to sell unused plots to recoup their costs. Because of the potential for large profits, many companies used underhanded tactics to obtain these grants. This often resulted in scandal.

In Minnesota Territory in the 1850s, construction of a railroad system stood to benefit both the local and federal governments. An 1847 Ojibwe land cession, the 1851 Treaty of Traverse des Sioux, and other treaties had opened up new land to Euro-American immigration. In bringing a railroad to these areas, local legislators hoped to hasten the newcomers’ arrival. They estimated that well-placed rail lines would bring immigrants to two million acres. Nationally, access to railroads gave the federal government the ability to move U.S. property and to transport troops during wartime at a reduced rate. It also allowed them to transport U.S. Postal Service freight at a discount.

In 1854 territorial governor Willis Gorman proposed that the local legislature ask the U.S. Congress to grant land for a single railroad system in Minnesota Territory. Such a grant would fund construction without public upfront cost. On March 4 legislators approved the formation of the Minnesota and Northwestern Railroad to own and operate one of the new rail lines. It would begin at the northwest shore of Lake Superior, continue through St. Paul, and end at the territory’s southern border. Gorman signed a law chartering the line just before midnight. It was the final day of the legislative session.

The charter included a controversial provision stating that future land grants to the territory would be passed to the Minnesota and Northwestern. The transfer was to be direct and automatic, leaving little chance for the legislature to impose conditions.

In February territorial delegate Henry Rice had presented a land grant bill to the U.S. House of Representatives. The House rejected it for being too limiting. It claimed that unfair advantages were given to the Minnesota and Northwestern due to suspect partnerships within the Minnesota legislature.

Most of the company’s top managers lived in New York and London, raising concerns about their intentions in the territory. Minnesota citizens complained that a company without local interests wasn’t concerned with the well-being of the area. A Minnesota company, they argued, was best suited to construct a line that benefitted the territory. They maintained that employing outsiders would carry the financial windfall from the land grant outside Minnesota.

On May 6 a new bill, drafted by Henry Sibley, was submitted. It was carefully worded so that only companies that had not yet been “instituted or organized” were eligible for land grants. The new bill was designed to allow future Minnesota legislators to choose from a pool of yet-to-be-formed companies.

The second bill passed the U.S. Congress on June 28. Before President Franklin Pierce could sign it into law on June 29, its wording was changed to disallow land ownership by companies that hadn’t been both “instituted and organized.” This subtle change returned eligibility to the Minnesota and Northwestern Railroad. A member of the Committee on Public Lands claimed the change was requested by men who had contacted him. He refused, however, to name them.

Though minor, the revision altered the meaning of the Sibley-written bill. The original bill gave the land to Minnesota Territory; the modified version returned it to the railroad company. On July 24 U.S. Representative Elihu Washburne brought charges of fraud and called for an immediate investigation. On August 3 the second bill was repealed by the U.S. Congress. The Minnesota and Northwestern Railroad tested their legal ownership of the grant but was eventually forced to waive it.

The awarding of railroad land grants continued to stir up controversy in the late 1850s and 1860s. In 1871 the federal government abandoned the policy, marking the nationwide end of an era.

Matt Reicher is a student at Metropolitan State University graduating with a BA in History in May 2014. He is currently interning with MNopedia and is interested in the Territorial and WWI eras of Minnesota history.