Arts & Culture
MNopedia
This content is shared with MinnPost by MNopedia, the digital encyclopedia created by the Minnesota Historical Society and supported by the Legacy Amendment’s Arts and Cultural Heritage Fund.
June 24, 2014 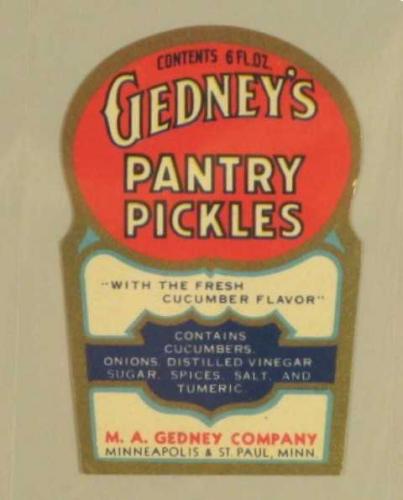 The official source of “the Minnesota Pickle” and creators of the State Fair pickle line, Gedney Foods is an iconic Minnesota company, with products distributed throughout the Midwest. Founded in 1880, Gedney continues to grow one of the more successful pickle brands in the United States.

Matthias Anderson Gedney founded the M.A. Gedney Company. He was born in Patterson, New Jersey on October 24, 1822. Gedney spent much of his youth and early adulthood at sea as a sailor on merchant and naval vessels. In 1849, he joined the California Gold Rush, making enough money to start a small trade business and marry Calista Jane Bailey. Gedney first got involved in the pickle business in 1863. That year, Gedney and his family moved to Illinois. He began working for Northwestern Pickle Works near Evanston. While in Illinois, Gedney’s wife Calista passed away in 1874 after having twelve children, three of whom died as infants. Gedney left Northwestern Pickle Works in 1876 to join S.M. Dingee and Co., a pickle company in Chicago. He was related to the Dingee family through his mother-in-law, Eliza Dingee Bailey. In 1877, Gedney was remarried, to Anne Kirk.

In 1879, after years in the pickle business, Gedney decided to found his own company. Moving to Minneapolis, Gedney searched for local Minnesota farmers willing to grow cucumbers, a semi-tropical vine fruit not yet introduced to the state. In 1880, he founded the M.A. Gedney Pickling Co. with two of his five sons, Charles Bailey Gedney and John Parker Gedney. The first factory opened in 1881 on Lowry Avenue in north Minneapolis. By 1888, the company was successful enough that two other sons, Isadore Vallier and Henry Edwin, joined. The company was incorporated on April 23, 1888.

By 1893, the Gedney Pickling Co. was expanding. Factories were already established in Minneapolis, St. Paul and Chaska; Omaha and Kearney, Nebraska; and Mauston, Wisconsin. Expanded railway service ended the need for these local branches by the early 1900s. All Gedney factories outside of Minnesota were closed. In 1958, the Chaska branch was expanded and all pickle processing moved to this location. The company went national in 1999 to better compete with larger corporations.

In 1905, Gedney Pickles celebrated its twenty-fifth anniversary. That same year, Matthias Gedney passed away. His youngest son, Isadore Vallier Gedney, succeeded him as head of the company. The company remained under the leadership of Gedney descendents. Isadore Gedney’s son-in-law Harry Augustus Tuttle, II succeeded him in 1945. Harry Tuttle’s son, Gedney Tuttle, took over in 1967, followed by his son, Jeffrey Tuttle in 1997. Other family members work in the factories or hold key positions.

When Gedney Pickles started in 1880, they offered only pickles. After opening a branch in Chaska in 1900, sauerkraut was added to the product line. The company soon added other vinegar-based products, such as mustard, relishes, olives, catsup (now commonly spelled ketchup), Worcestershire sauce, horseradish sauce and tobacco pepper sauce. Production has ceased on all except pickles and relishes. In 1940, bottled salad dressings were added, and in 1994, jams, both of which are still produced in the early twenty-first century. The company began its State Fair Pickle line in 1991 with two varieties. This line grew to five pickle types and four different jams in 1994. In 2002, Gedney began production of all pickles for the Del Monte and Target Archer Farms brands.

Heidi Gould has a B.A. in Anthropology from the University of North Dakota and an M.A. in Museum Studies (focus in Museum Education) from Indiana University/Purdue University- Indianapolis (IUPUI). She has worked for the Science Museum of Minnesota, the Children’s Museum of Indianapolis and the Eiteljorg Museum of American Indians and Western Art. She is currently employed at the Carver County Historical Society as Education and Volunteer Coordinator.